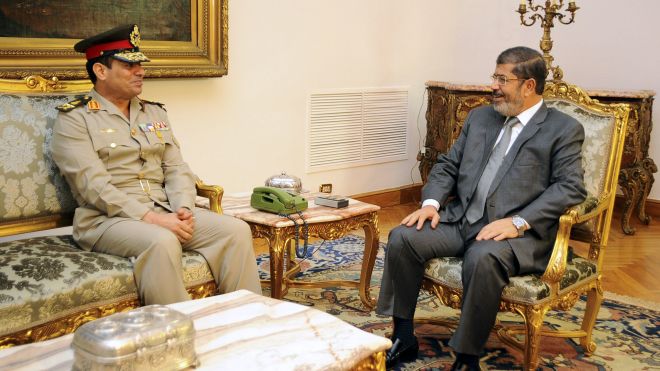 During the 2011 Egyptian uprisings, the military was jeered for cracking down on protestors and for the infamous virginity tests they conducted on detained female protestors.  In June 2012, when Mohamed Morsi won the presidential race with 51% of the votes, crowds gathered in Tahrir Square to celebrate his victory, chanting : “God is great” and “down with military rule.“    Barely a year passed before the crowds were cheering the U.S.-backed military for ousting their first democratically elected president in a coup dubbed by various media outlets as a democratic coup.   What transpired?

Mr. Morsi alienated both Egyptians and foreign states in his short term in office.  No doubt many Egyptians were alarmed and opposed to what they perceived as his ‘power-grab’, as well as the new constitution which passed in a referendum with 64% of a measly 33% turnout; but inarguably,  the economy was a huge factor in sending protestors to the streets.  The lack of progress in dealing with the economy, the fuel shortages,  and the IMF loan delay also contributed to the continuous unrest in Egypt .

It is worthwhile mentioning here that a significant percentage of Egypt ’s economy is run by the military.    Robert Springborg, an expert on Egypt ’s military told The New York Times: “Protecting its businesses from scrutiny and accountability is a red line the [Egyptian] military will draw”.    Also of note is the fact that long lines formed at gasoline stations in Cairo amid an apparent fuel shortage, disappeared quickly after the coup.  This led to speculation that the fuel crisis had “been deliberately engineered to feed unrest and dissatisfaction with the Morsi government in the days before its overthrow.”

Gripped in social and economic crisis, it came as no surprise that on May 1st, a group opposed to Mr. Morsi which called itself “Rebel” organized a 1 million people march to be held on June 30th.    The group also planned on delivering a signed petition to the Prosecutor General at the same time with the aim of collecting 15 million signatures by that date.  “In one month, movement promoters travelled the length and breadth of the country, collecting signatures door to door, on buses, in restaurants and offices as well as on the internet.” They claimed that they had secured just over 7 million signatures, and four weeks later, on June 28th, the Washington Post reported that the group had secured 22 millions signatures.   (Given the timeframe and the challenges, surely this number has a place in the Guinness Book of World Records – if only it could be verifiable).

This number cited by “Rebel” became an accepted reality and was promoted by media outlets without verification.  As anti-protestors marched on Tahrir as planned, military  tanks and personnel blocked the pro-Morsi crowd from the onset;  enabling the media lens to capture the sea of anti-Morsi demonstrators and marginalizing his supporters.  These actions together with the unverified 22 million signatures claim played an essential role in calling a military coup a “democratic” coup.   Washington was off the hook and funds could to secure the Egyptian army’s cooperation and loyalty to Washington .

But one should ask why was it that Washington which has a long standing relationship with the Moslem Brotherhood[1] rejected Morsi?

There are many answers to this question – with the most basic being that he was not part of the plan.  As early as 2007 speculation about Hosni Mubarak’s  replacement appeared in the American mainstream media.  Discussing his ailing health, in October 2007, Michael Stackman’s opinion piece in The New York Times addressed the importance of a Mubark’s replacement to be someone who would continue the same policies towards Israel and Washington .

With this in mind, in 2008, young, ‘civil society’ Egyptians met with former Secretary of State Condeleeza Rice who called the young Egyptian activists the “hope for the future of Egypt “.  The “hope of Egypt ” also met the US National Security Advisor and prominent Congressional member. These meetings were organized by The Freedom House (see link here).  The Freedom House, an outfit which calls itself “independent” but receives 80% of its funding from the US government, including the National Endowment for Democracy — a CIA front — claimed to provide “advanced training on civic mobilization, strategic thinking, new media, advocacy and outreach“.

Freedom House had reason to boast.  2010 was a crucial year to decide and settle on Mubarak’s successor as time was of the essence given Mubarak’s health and terminal illness.  In April 2010, the pro-Israeli Jerusalem Post ventured that former IAEA Chief, Egyptian-born Mohammad El baradei would “add excitement to Egyptian politics.”  He did.   Mr. El-Baradei served on the Board of Trustees of the International Crisis Group funded by Carnegie, Soros, and Ford (Ford Foundation was a conduit for CIA funds during the Cold War – Saunders 2000[i]) where he rubbed shoulders with colleagues Shimon Peres, Saudi Arabia’s Prince Turki al-Faisal,  Richard Armitage,  Zbigniew Brzezinski, etc.

Morsi’s election not only interrupted Washington ’s efforts to replace Mubarak in spite of his close cooperation with Washington (specifically in cutting ties with Syria ).   Morsi presented Washington with many challenges.  Not only was he reported to have called “Jews descendants of pigs and apes”,  but his election into office was warmly welcomed not only by HAMAS, but also by the U.S.-backed Palestinian President Mahmoud Abbas, who called Morsi “the choice of the great people of Egypt” while one of his senior aides, Saeb Erekat, said the democratic vote for Morsi “meant the Palestinian cause was the Number One priority for all Egyptians“.    Washington was not in the business of making Palestinians jubilant, or contradicting Israel ’s demands. .

Regardless,  Morsi dug in deeper.    Soon after taking office, Morsi forced NGO’s out of Egypt, raising the ire of Freedom House (NGOs were referred to as force-multipliers by Colin Powell, and have been instrumental in executing US policies around the globe).   Additionally, Morsi forced out powerful military figures in order to reclaim the military power the army had seized.  As Juan Cole put it, ‘a coup against the generals’.  Israel called the move “Instability in Egypt to threaten Israel ,” and “Muslim Brotherhood on our doorstep.”  However,  Morsi made the mistake of appointing Abdel-Fattah el-Sissi as military chief – a man with close ties to the U.S. and Saudi Arabia .

Perhaps his most serious offense was his opposition to a dam which both Israel and Saudi Arabia favored as they had plans to divert water from the Nile .  In 2012, it was reported that Saudi Arabia had claimed a stake in the Nile .    Israel ’s ambitions went much further back.

First initiated by Theodore Herzl in 1903, the diversion plan was dropped due to British and Egyptian opposition to it only to be picked up again in the 1970s.  At that time, Israeli’s idea was to convince Egypt to divert Nile water to Israel .  In 1978, President Anwar Sadat “declared in Haifa to the Israeli public that he would transfer Nile water to the Negev . Shortly afterward, in a letter to Israeli Prime Minister Menachem Begin, Sadat promised that Nile water would go to Jerusalem .  During Mubarak’s presidency, published reports indicated that Israeli experts were helping Ethiopia to plan 40 dams along the Blue Nile .”[ii]

On May 30, 2013, The Times of Israel reported that the construction on the Grand Ethiopian Renaissance Dam (on the Blue Nile) had sparked a major diplomatic crisis with Egypt .  The article also reported (citing Al-Arabiya) that Major General Mohammed Ali Bilal, the deputy chief of staff of the Egyptian Armed Forces, had said Egypt was not in a position to confront the project (countries).  “The only solution lies in the US intervening to convince Ethiopia to alleviate the impact of the dam on Egypt .”  No such solutions from the U.S.

On June 3rd,  Morsi met with his cabinet to discuss the dam and its implications.  Cabinet members were surprised to learn that the meeting was aired live.   During the meeting, a cabinet member said: “Imagine what 80 million of us would do to Israel and America if our water was turned off”.  Morsi contended that “We have very serious measures to protect every drop of Nile water.” The day prior to Morsi’s ouster, on July 2nd, Fox News reported that work on the dam was “proceeding apace”, with plans to finish the project in 2017.

It seems the only “serious measure” undertaken was the ouster of Morsi.  With him gone, the military engaged, and the poring in of Saudi money, the dam project will proceed unhindered;  blood-diluted Nile water will flow to the enemies of the Egyptian in sink with a current of jubilation by the crowds who ‘can’t see the forest for the trees’.

Soraya Sepahpour-Ulrich is an independent researcher with a focus on U.S. foreign policy and the influence of lobby groups.

Notes
During the early years of the Cold War, American spies in Cairo   “engaged in an operation to show Soviet ungodliness”  by circulating anti-Islamic literature and attributing it to the Soviets.   When the nationalist Gamal Abdel Nasser refused to become America ’s man in Egypt , CIA looked for a “religious spellbinder” who could tip the scales of Arab opinion and “divert the growing stream of anti-American hostility.”  The intent was to “groom a messiah who would start out in Egypt, and then spread his word to Africans and perhaps other Third World peoples” in order to “immunize them against false prophets,” namely Nasser[1]. Although no ‘messiah’ was groomed, the CIA did co-opt leaders of the Islamic revival movement known as the Ikhwan, or Muslim Brotherhood and “the seeds of a  furtive relationship between the CIA and the Ikhwan were planted.”  In the years ahead, the agency would become a de facto accomplice of the Muslim Brotherhood and its “terrorist” activities[1].
[i] Frances Stonor Saunders. The Cultural Cold War: the CIA and the World of Arts and Letters. New York : New Press 2000