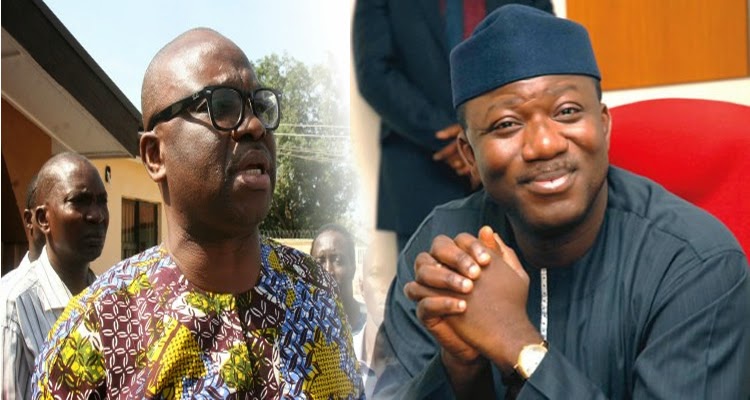 “How on earth, in the year of our Lord 2014 can anybody compare Kayode Fayemi, our incumbent Governor with Fayose, our former Governor who we are trying hard to forget that he ever ruled our state.” – Professor Akin Osuntokun.

I have known Prof. Akin Osuntokun as an academic, scholar, writer, leader, teacher, historian, diplomat, elder statesman, and thinker for years now. At 80 plus, Professor Akin Osuntokun has paid his dues and done his best for Nigeria in various capacities. His numerous interventions in matters of leadership and politics in Nigeria will be too much for me to recount here. Infact, time and space will not permit to dig into this great man’s works in Nigeria but I know history will ever remain his witness.His recent article on Ekiti State Governorship elections coming up on June 21, 2014, moved me to write this piece. The title, EKITI MUST NOT DIE ON THE DAY OF DESTINY pricked my conscience and compelled me to contribute to the debate even though I am not from Ekiti State but I know Dr Fayemi very well. Ekiti State is the land of knowledge, the home of professors, and the land of the gifted. The renowned Professor of history and international relations cried out as an elder because of the strange Political developments in Ekiti state at the moment. He cried out because men without conscience, liars, motor park touts, scoundrels and common illiterates are planning to seize Ekiti State by telling lies a thousand times to make it sound real. He cried out because people who do not know are trying to sell fake drugs to the knowledgeable people of Ekiti State. The erudite professor is calling on Ekiti People to rise up to defend the integrity and honour of Ekiti State, the land of their birth, before they make the mistake of allowing Ayo Fayose to grab power again through whatever means.

Hear the professor: “If we are sensible people and I think we are, we should not be faced with this choice but the choice is clear. There is no meeting point between darkness and light, between peace and war, between serenity and confusion, between murder and life, between development and underdevelopment, between progress and backwardness and between education and illiteracy.” 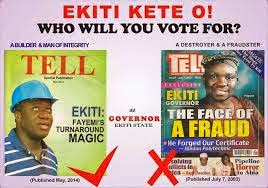 It is only in Nigeria that illiteracy, mediocrity and madness is celebrated. But I can understand. Any celebrated idiot or vagabond in power is celebrated because there is a lot of money to spend and there will always be supporters to urge the person on. Yes since they are benefiting, then the man is always good, and God sent. But this stupidity must stop in Ekiti on June 21, 2014. Ekiti people known for possessing common sense, intelligence, knowledge, wisdom and understanding must set the pace for the other States to follow. Ayo Fayose must be stopped in Ekiti State. Ekiti people must end his political career for the good of the commonwealth. Comparing Ayo Fayose with Dr Fayemi is like Apple and Orange comparison. It is like comparing a primary school boy with a competent university graduate.
If experience is the Yardstick to determine who the cap fits, Governor Fayemi is the one. If performance and service delivery are the criteria for consideration, Fayemi has performed and delivered services to Ekiti people in his last four years. If education is the parameter to judge, he is a Ph.D. in War studies, intelligence and strategy. If power of elocution and engagement are the criteria, he has got it.If flamboyance, glamour, carriage, charisma are the rules of the game, he has got them sufficiently. If character, integrity, honour is to be considered, he has them in abundance. If trust is the parameter he has been tested and therefore he can be trusted. If local, national and international connections are the rules of the game, he has got them plenty. If careful and prudent management of both human and material resources are the criteria for endorsement, he holds the ace. If capacity for leadership is the benchmark of consideration, please give it to him.

In the days of the locusts I knew Kayode Fayemi but I knew not Ayo Fayose. Dr Fayemi anchored Radio Kudirat International, when the lives of his people were in danger but nobody knew about Fayose then. Dr Fayemi was one of the real men, who stood up to be counted when it mattered most but cowards like Fayose hide in the corners. I blame former President Obasanjo for rigging this violent man to an exalted position of a Governor meant for serious- minded people. For almost three years he was in power, violence, murder, arson, thuggery, corruption, and political rascality took the centre stage.

Ayo Fayose was impeached and disgraced out of office by the Ekiti State House of Assembly. As I write this Ayo Fayose has a murder case in courts to be saddled with. Young and dynamic University graduates trained abroad returned to help their state to grow but Fayose stopped them by ordering that they should be shot.

We have passed the age of poltical stupidity and rascality to the age of big ideas. We have moved away from brigandage and idiocy to the age of character and integrity. Dr Kayode Fayemi belongs to the Class of Nigeria’s upcoming leaders not more than ten in number, who hold the keys to the future.

Ekiti people must speak up wherever they are now before June 21, 2014 or a mistake would be made which will cost 4 or 8 years of no progress in Ekiti State.

Evil triumph in any society when good men do nothing. Wise men suffer the rules of idiots if they do not struggle for power. Bonafide citizens become Slaves, when idiots seize the centre stage. Politics is too important to be left to politicians alone. Allowing a compound illiterate like Ayo Fayose to return to ekiti state is to reverse Fayemi’s Progress in the last four years. Allowing Fayose to return to power is like forcing Ekiti to drink poison. Let every Ekiti man go home to salvage their land from Ayo Fayose and his motley crowd.