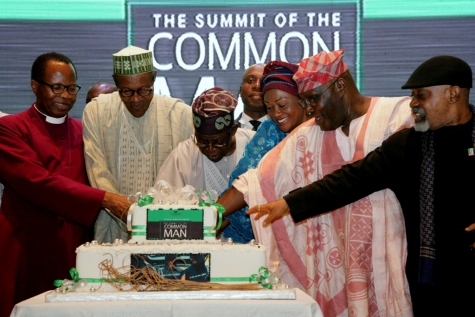 With today’s election, Ekiti State has become the epicenter of Nigerian electoral politics. Here, the major political fault lines converge into a great foreshadowing. Fateful questions not only about Ekiti but about the course of our nation and its uncertain democracy will be asked and may be answered this day. If this is how history will have it, so be it.

Elections in Nigeria have rarely been a transparent exercise. The ruling party has mostly dug into its bag of electoral tricks to cast about a vast assortment of malpractice over almost every important contest. As the ruling PDP senses its popularity flag and apprehends the existence of an opposition party that it cannot dominate, PDP anxiety has become acute. Rigging is no longer a tool it uses in election. Rigging has become an article of faith for them.

With the advent of the APC, the PDP finally faces a challenger strong enough to remove its chokehold on the nation’s future. If the PDP truly had the people’s welfare at heart, the APC’s onset should have spurred the PDP to improve its ways of governance. Instead, the PDP shifted in the opposite direction. Faced with this new political reality, the PDP pays even less attention to the essentials of democratic governance so that it may engulf us in deeper and deeper misconduct so long as that misconduct guarantees their continuation in power. One of the terrible by-products of this descend into authoritarian behavior is the decision that the APC shall not win another governorship election, notwithstanding the candidate the people actually prefer.  Thus, the commandment of the PDP is not to allow an election to be an election. Their golden rule of elections is ‘that it is better to steal than to lose’.

Elections for the PDP are not seen as exercises in democratic expression whereby the people are allowed the leaders of their choice. Elections to them are a perverse ritual where they explore the terrible lengths to which they will go to suppress the people’s will. Thus, all eyes are on Ekiti today.

Ekiti is not high political drama because of the scheduled election. It is suspenseful because everyone knows the despot of Abuja seeks to hijack the people’s will. Thus, there shall be a contest within the contest. Can the will of the people withstand the arbitrary, undemocratic power and pull of the Aso Villa monarch and his court jesters? That is the question on everyone’s mind. So, it might as well be brought into the open.

If allowed to proceed freely and fairly, the election is a foregone conclusion. Governor Fayemi has distinguished himself as a leader dedicated to the welfare of the people of his state. He has done more good in four years than his PDP challenger can do in a lifetime of lifetimes. Fayose can do little good because he has little good in him. Any good he has done, has been by accident. During his tenure as governor, he covered the state in a blanket of suppression, intimidation, violence and blood. Where Fayemi is a statesman, this man is sinister. Where Fayemi builds and unifies. Fayose destroys and divides. Fayemi represents the dream of an improving future. Fayose represents the reprise of a departed nightmare. No one in their right mind chooses a nightmare over a dream or bad over good. The Ekiti People must choose the path of “Commonsense Evolution” that can deliver development and societal emancipation.
The peace and development of Ekiiti should not be replaced by a retrogressive mind; in party formation, lack of character, lack of content and lack of discipline.

Sadly, Labour Party’s Bamidele has let unbridled ambition get the better of him. Had he waited to gain the requisite experience and knowledge, perhaps he could have become a decent candidate in time. But that would have been years from now. That time has yet to come. At the moment, he is like unripe fruit picked much too early from the tree.  We all know what happens when you eat such a thing.  It is bitter to the mouth and hard on the stomach. The people of Ekiti do not need this.

Thus, we watch an election that will not be so much about the candidates as it will be a revelation about those conducting the election and the puppet masters pulling the strings of those conducting the election. INEC blotched the election in Anambra.  It will likely perform poorly and with manifest bias in Ekiti. If INEC continues in this troubled way, history will record it as one of the authors of democracy’s death knell. The security forces are under instruction to obstruct the process and intimidate those who stand for Fayemi. PDP has raided the public treasury and is pouring the people’s money to buy the election for someone the people don’t want.  Adding insult to injury, Minister of State for Defence has deployed to Ekiti where he is brandishing every tool at his disposal to thwart the will of the people.

With the dire security conditions in the nation and the status of the Chibok girls still at ominous risk, one would think this senior defence official has more important work on his desk than to be the chief campaign hack of a candidate who strikes fear in the hearts of the people of the state. If only the PDP and its errant minister of state  devoted as much energy and drive to our security challenges as they do to stealing elections, this nation would both be safer and more democratic. Instead, we sink into deeper insecurity and despotism.

The election in Ekiti is important not only to the fate of that state but of the entire nation. No doubt the PDP gang will stop at nothing to abridge the right of the people so that their brutish loser may win. This gives rise to the questions of the day. Will INEC bend as always or will it finally stand and do its duty as is proper? Will the people decide that enough is enough and not only vote but defend their vote in all proper and right ways? Will we see the advance of democracy or its retreat in the face of mounting suppression?

These are the questions of the day and the answers that arise not only will determine the governorship in Ekiti but also will augur for good or evil regarding the 2015 elections. As such, the fate of Nigeria lies in the balance and is being shaped right before us. All eyes must be on Ekiti for what we see there today will be what we will see for the rest of Nigeria in the months to come. Pray what we see will be democracy. If not, then it will be something that pushes us closer to disaster.