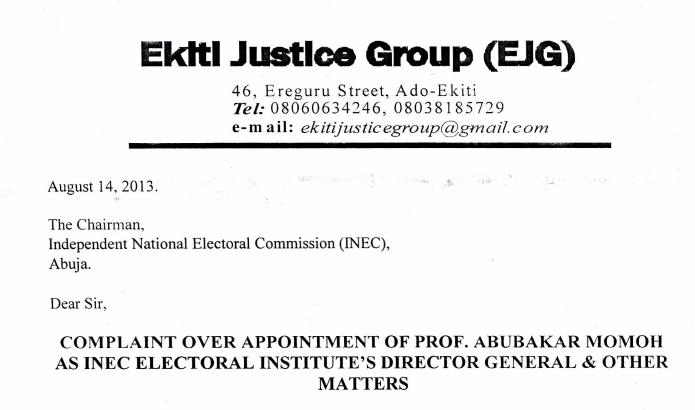 NewsRescue– A civil society group, the EKITI JUSTICE GROUP (EJG) has petitioned INEC chairman Prof Atahiru Jega over the appointment of Prof Abubakar Momoh into INEC position of Director General of Electoral Institute, saying his past record as “Sympathizer”of the ACN one of the merged parties in APC made him ineligible to hold any position in the electoral umpire.

In the petition dated 14 August 2013, copies of which were sent to President Goodluck Jonathan, Senator David Mark the Senate President, the Speaker of the House of Representatives and the National Security Adviser,the group detailed the partisan activities of Momoh in the rerun election of Ekiti state including his arrest during the election.He was alleged to have testified for ACN candidate Dr Kayode Fayemi ,presently Governor of Ekiti state before the election tribunal as “Prosecution Witness 37, alongside one Dr. Azeez Olaniyan, who also disguised as- Election Observer during the 2009 rerun election.

Under Cross-Examination, Prof Momoh admitted at the tribunal that;
1. He was once a member of the Board of Governor Fayemi’s Non Governmental
Organisation, the Centre for Democracy artd Development (CDD).
2. He had related closely with Governor Fayemi for over 30 years.
3. That Dr. Azeez Olaniyan provided the vr”hicle with which he moved around during the
election.

It will interest you sir, that the said Dr. Azeez Olaniyan (whose vehicle Prof Momoh used to ‘monitor’ the election) was later appointed as Caretaker Chairman of Ekiti South-West Local Government Area of Ekiti State by Dr. Kayode Fayemi when he became the State governor via the October 15, 2010 Appeal Court judgment” the group stated adding that the roles clearly put him as one who cannot be impartial in electoral matters involving other parties.

The group also wondered why INEC had not been interested in prosecution of persons who allegedly admitted before a tribunal that they partook in arson and burning of INEC headquarters in Ido Ekiti during the rerun elections. The group stated inter alia” in his witness statement on oath, one Peter Oladosu claimed that he was the one who set the Ido/osi Local Government INEC office ablaze’ In other words, Peter Oladosu confessed to burning INEC property. But curiously, up till today, INEC has not deemed it necessary to take any step aimed at prosecuting Oladosu. Instead of being made to face prosecution, Peter Oladosu is now enjoying life as a Special
Assistant in the ACN (now APC) government of. Kayode Fayemi ,the direct beneficiary of the burning of the Ido-osi Local Government’s INEC office. This is because election results that the Court- cancelled to pave way for Dr. Fayemi’s emergence as governor of Ekiti State were cancelled because INEC could not produce voters Register that was among the electoral materials destroyed when the INEC office was razed down.

Records of Peter Oladosu’s confession on oath can still be found among the Tribunal’s records of proceedings.

In view of the above, it has become imperative that we begin to petition long before the 2014 and 2015 elections on anything that is capable of putting booby traps in the way of transparent elections in the country, which is a negation of the national quest for saner polls.

It is our view that it should be part of the electoral ethics that persons whose political sentiments and loyalties are already known must not be saddled with the job of electoral umpires.

Election umpires must like Caesar’s wife be above board. We therefore call for a review of the appointment of Professor Momoh, a notable APC ally as the Director General of INEC Electoral Institute.” the group concluded.

The petition was signed by Ebenezer Olaleye and Comrade Gbenga Babawibe