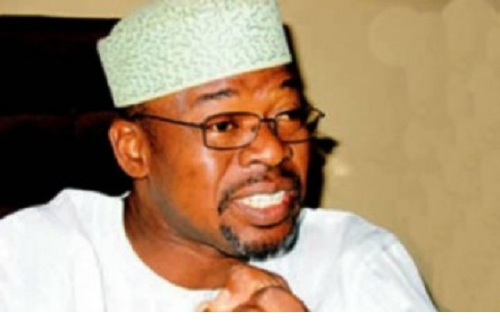 Former Governor of Ekiti state and National Vice Chairman of PDP SW chief Segun Oni has told an  Oyo state High court  at Ibadan that   his petition to NJC and The Presidency on telephone interactions between suspended Court of Appeal President Justice Ayo Isa Salami and ACN leaders and counsel  was borne out of his patriotic duty to report judicial indiscretions  to the rightful authority.

Oni stated  that it was the unethical indiscretions which he noticed  in Justice Ayo Salami’s conduct in the handling of the Appeal of the candidate of the Action Congress of Nigeria ACN against  him that informed his petition to the National Judicial Council NJC, upon which, along with other unethical conduct,  made the body to recommend the suspension of Hon. Justice Ayo Salami to the President, Federal Republic of Nigeria, which recommendation the President upheld, and the suspension is still in force till now.

In his statement of Defence filed before the court against a  libel suit by  Chief Niyi Akintola  SAN against him over his petition to NJC on Justice Salami telephone interaction  with some ACN lawyers and chieftains  during the pendency of the Ekiti Election tribunal,Oni stated through his Counsel Gani Faniyi Esq that” his investigation established a proven uncontroverted evidence of telephone contacts both voice and textual between Hon. Justice Ayo Salami and some chieftains of the Action Congress of Nigeria ACN and their counsel, while the Appeal against the victory of the first Defendant at the Election Petition Tribunal was being challenged by the Action Congress of Nigeria, ACN and that  as a responsible Nigerian citizen ,whose duty it is to assist in the maintenance of justice and good governance,he  petitioned  the National Judicial Council (NJC), a body empowered by the Constitution of the Federal Republic of Nigeria, with the responsibility for investigation and discipline of erring judicial officers drawing attention to his observations for the purpose of the councils’s thorough investigation”

In addition to the above, the first Defendant also states that in the exercise of his constitutional rights, he forwarded and communicated same petition to the President, Federal Republic of Nigeria, Commander-in- Chief of the Armed Forces, who is the custodian of law and order, as well as the  peace and good governance in the country.

Concerning the libel suit by Akintola,against him and the Compass Newspapers,Oni told the court he  has a defence of Fair Comment, Qualified Privilege, Privilege Occasion and constitutional right in respect of his petition/communication.

He further told the court :”indeed the GSM telephone number 0803 764 3770 of the Claimant herein Chief Niyi Akintola SAN, a leading member of the ACN battery/team of Senior Counsels, was located and cited among others in the call logs  provided by MTN communications company to the Security agencies, as one of the calls to Hon. Justice Ayo Salami during the pendency of the Appeal of the Action Congress of Nigeria, ACN before a Panel of the Court of Appeal, presided over by Hon. Justice Ayo Salami.

“The first Defendant maintains that it is the trademark of the Claimant( Niyi Akintola )to   berate, pour venom, denigrate in an uncouth manner against his political party, the People’s Democratic Party, PDP cast sweeping aspersions on its officials, sympathizers including the first Defendant, former President Olusegun Obasanjo, former Governor Olusegun Agagu and many others.

“The Claimant was Counsel to PDP candidate in Ondo State and former Governor of Ondo State in the Ondo State Gubernatorial Tribunal/Appeal contest of 2007,whose legal duty it was to defend the electoral victory of the PDP and it’s candidate,Dr Olusegun Agagu against his opponent of the Labour Party,Dr Segun MIMIKO .

Oni stated  that he appropriately reacted to reporter’s interview over a statement credited to the Claimant in the PUNCH  newspaper edition of Tuesday, December 28, 2010, with a screaming banner: ‘PDP NEVER WON ELECTION IN SOUTH WEST- Akintola’. .
He said he considered it uncharitable and unprofessional for Chief Akintola SAN, who was briefed ,paid and indeed defended the election of PDP Governorship candidate in Ondo state  before the election Tribunal to later turn around to claim in a newspaper interview that the”THE PDP NEVER WON ELECTION IN THE SOUTH WEST”

He said the  inference and conclusion that was drawn from the position and press statements of the Claimant on the 2007 gubernatorial contest in which he participated and acted as Counsel that defended the victory of the candidate of the PDP, was that his client Olusegun Agagu /PDP rigged the election in which he was declared winner, since according to the Claimant, the PDP did not win the election.

“The first Defendant(Oni) further believes that it is uncharitable and unethical for the Claimant who was briefed as counsel and acted in that capacity  for the Candidate of the PDP,to turn round to vitiate his brief in such a brazen manner,and to have arrogated to himself the role of  publicist of the ACN, in the South West in contradiction to  his client’s interest.The first Defendant believes that if the Claimant, had the belief and opinion adverse to the interest of his client as stated in his interview ,he ought not to have accepted the brief,and payment for professional service as counsel to the Governorship candidate of the PDP and believes he acted in bad faith and in  unethical manner.

The first Defendant maintains that one Olalekan Adetayo, a reporter of the newspaper filed the report with the following excerpts: “A Senior Advocate of Nigeria, Chief Adeniyi Akintola on Monday said the People’s Democratic Party never won election in the South West states of the country, hence the party’s leadership should stop blaming the judiciary for the PDP loss of Ondo, Ekiti and Osun states. The PDP 2007 victories had been reversed in the three states with the Labour Party now in charge of Ondo State, while Action Congress of Nigeria is in power in Osun and Ekiti. In an interview with journalists in Ibadan, Oyo State capital on Monday, Akintola said anybody who blamed the judiciary for the fate of the PDP in the South West must ‘either be mischievous, ignorant or down-right fool.’ ‘The truth of the matter is that the PDP never won election in the South West with the  confessions of both former President Olusegun Obasanjo and one of the Governors in the zone at different fora’ ‘Everybody knew that there was no election in the South West in 2007, but that Obasanjo wanted everybody in the mainstream by–fire by-force and anybody blaming the judiciary must be up to something else, because , the judiciary is there, holding the scale, the balance for everybody’ he said.’

The first Defendant, a former Governor on the platform of the PDP in Ekiti, South West, Nigeria, therefore pleads justification for his statement, the basis of which Claimant has approached this Honourable Court.

The first Defendant states that apart from himself, the entire chapter of the PDP, South West was miffed and jolted by the outburst and the recant of a whole Senior Advocate, who represented the candidate of the party in Ondo State, South West Nigeria, in the 2007, gubernatorial election Tribunal/Appeal, could recant and turn coat on his conviction that made him to accept a brief, got paid and defended the PDP’s Olusegun Agagu electoral victory as Governor in the 2007 polls.

“The first Defendant maintains that not yet done with his usual castigation of the PDP in the South West, especially on the 2007 gubernatorial elections, in which the Claimant acted for and defended the PDP’s Ondo gubernatorial contest, he, as usual upbraided the PDP in yet another vitriolic interview contained, in a full page of THE NATION newspaper edition of Saturday, May 11, 2011, threw caution to the winds in the denigration of the first Defendant’s People’s Democratic Party PDP, to an extent that his interviewer, one Lekan Salaudeen who must have been startled at his vituperations referred to him as a fiery Ibadan-based lawyer.

When the matter came up on Monday October 15, 2012 at Oyo State High Court of Justice, Ibadan, in Court 10, before Hon Justice A. A. ADEREMI. Akintola whose counsel attempted to move the motion for judgement in default was made to withdraw the motion since Oni ” s statement was already before the court,Justice Aderemi then directed parties to file their Forms 17 & 18 for Pre Trial Conference .