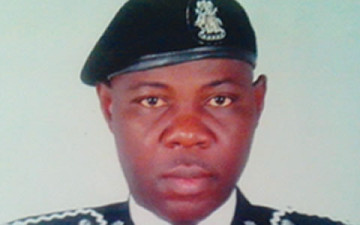 When on April 6, 2013, Jane and Olusoji Elegbede got married in Lagos State, their joy knew no bounds.

Although Olusoji was a policeman serving in Yobe State, which is fraught with security challenges, Jane did not mind living there with him.

Their plan was to settle down, have children and grow old together.

Unfortunately, this was not to be as Olusoji, an Assistant Superintendent of Police, was gunned down by a police corporal  in Gashua Bade Local Government, Yobe State, while on duty less than five months after their wedding.

Olusoji’s widow, who spoke while fighting back tears, told PUNCH Metro that she was still in shock over the incident.

Narrating what led to her 39-year-old husband’s killing, Jane said her husband, who was the Administration Officer at Gashua Police Division, was killed by a 53-year-old corporal, Andrew Bitus.

She said, “The station is situated in a barracks and we all live in the barracks. The corporal (Bitus), was dating an elderly woman and they had a quarrel. Bitus wanted to part ways with the woman, so he told her to refund the money he had spent on her but the woman refused.

“The corporal dragged the woman to the station but the Divisional Police Officer intervened, saying it was a civil case and told the corporal to take the matter to the court.

“The DPO travelled some days later, on August 30, 2013 to be precise. The corporal arrested the woman again.

“My husband, who was the most senior officer in the station at the time, reiterated what the DPO said and ordered the corporal to let the woman  go.

Jane said the corporal became infuriated and insulted her husband who was over 10 years younger than him.

She said in the ensuing argument, the corporal brought out his rifle and shot the deceased many times.

She said, “I was in my house when I heard gunshots. Initially I thought it was Boko Haram members that were attacking the station. It was a few minutes later that someone informed me that my husband had been shot.

“When I asked why they could not stop the trigger-happy policeman, they told me that they had to run for cover for fear of being hit by the bullets.”

PUNCH Metro learnt that Olusoji was rushed to the General Hospital, Gashua, and was taken to the theatre where a surgery was done to remove the bullets from his body.

“The doctors told me that he survived and was going to be taken to the Federal Medical Centre, however, they later opened up to me that he died during the surgery,” she said.

Jane insisted that the corporal must be brought to book, adding that her husband was not involved in any love affair with the woman who was at the centre of the feud.

PUNCH Metro learnt that the killer policeman had been dismissed and was being detained at the State Criminal Investigation Department, Damaturu.

The unidentified woman, who was being harassed by the corporal, had also been arrested.

A cousin of the deceased, Kunle Bajela, said apart from getting justice for the killing, the family wanted his widow to be well taken care of by the police authorities.

“My cousin died in active service and we want those who depended on him for their upkeep are not neglected by the police,” he said.

The Force Public Relations Officer, Frank Mba, told our correspondent on the telephone that he would call later to brief him on the incident.