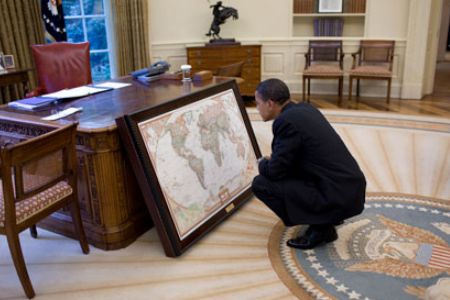 Who can hold Obama back when he decides to strike? Obama will send a deterrent message to Syria sooner or later on his own terms. Deterrent must not be based on impulsive reaction defying all reasonable counsel. It must send a message to the whole world that crude and reckless killing as in Rwanda, Kosovo or Syria cannot be tolerated. Both the wrong doers and the victims must get the message that the world would not stand by and let atrocities happen.

President of United States can always find a reason to strike from a distance without putting any troops on the ground with or without the approval of Congress. The question is not if Obama is going to launch Tomahawk cruise missiles in Syria, it is a matter of when. Asking the international community for their participation is not a matter of weakness as his opponents would like to portray him. Indeed, it is a sign of strength in raw power with cerebral.

Many of us would rather see United States as the most powerful nation than any other country. We do not want United States to outspend itself or implode for that selfish reason. So, most of the world citizens have a stake in United States as the world power. Africans fought chaos in Liberia, Mali and Sudan but Saudi Arabia would run to Americans. Those that did not vote for Senator McCain and Romney are relieved. The senator has never seen a war he could not fight.

Senator McCain wants an expanded action even when USA is still paying for two wars and the military is trying to consolidate and reinvent itself to fight regional terrorist wars. If Obama had gotten involved as they want, two years ago or later and Assad was defeated, they never worry about how they were going to control the same chemicals in the hands of the most dangerous terrorists that are established in Syria. When USA lost the Shah of Iran, what did they get?

General Martin Dempsey, Chairman of U.S. Joint Chiefs of Staff, already expressed his concern about sequester effect on the military and its readiness after 10 years at war. But the hawks are ready to launch another war alone even if their most traditional ally Britain is not willing to go along just as most Americans are war-weary. While these are not factors that would prevent a country like USA from defending its national interest, it counts when the point is deterrent.

Retired U.S Marine General Anthony Zinni echoing the concern of Gen. Dempsey with others on CNN with Anderson Cooper wondered what the politicians really want from U.S military. They would of course exclude military from any blame but fault Obama for dithering on red line they helped create in the face of elections. They look for every opportunity to declare him indecisive.

People must learn that Obama is a deliberative President that does not shoot from the hip. It worked for him each time. We all criticized him for giving too much to his opponents during negotiations; he won his second term by flooring extremists’ infighting. Neither McCain nor Romney knew how he hit them: rope-a- dope. They are back saying he threw Secretary of State Kerry under the bus after asking him to make a case for discretionary strike on Syria.

People forget who John Kerry a decorated POW “swift-boat” during his run for the Presidency and Secretary of Defense Chuck Hagel another decorated Vietnam Veteran that was heckled by his Republican friends during confirmation hearing into Obama cabinet. These are no strangers to war; they happen to work for a President that came preaching judicious and discrete use of military power so that Americans do not spread resources too thin like a lion fighting hyenas.

During the election into his first term, Obama made it clear that he was not against wars, what he was against was dumb wars that serve no lesson but useless destruction of lives and values. When he was asked for additional troops’ commitment to Afghanistan, he took his time when his opponent claimed there was no more opportune time.  Afghanistan remains where it was.

Those that kept on clamoring for redline are now saying if he knew he was not going to follow up on it, he should not have drawn it. These are hypocrites. They pushed for it everywhere including one in Iran during the election. United States was even lectured about the meaning of redline by a foreign power in United Nation of all places to favor an opponent in a U.S election.

After all, they argue that he did not need congressional approval for Libya strike, Clinton did not need one for Kosovo, Papa Bush did not need one for Iraq and Panama nor did Reagan need one for Grenada. The only clean cut in all of these were Libya and Kosovo that had the backing of international communities. In this case Britain backed out. Comparing Grenada to Syria!!!

There is a long record of presidents that shoot from the hips. Jimmy Carter lost to Ronald Regan in the middle of Iran hostage crisis. The notion was, it would not have happened if Regan was in charge. At the end of the day Arms for Hostage became a scandal. During election opponents would say anything to get elected. When they get there, they realized that it takes more than words to perform.  Obama would say that too today.

Senator Mitchell of Maine (that was later influential negotiator of Irish peace deal) had to lecture Oliver North that all Americans love God and Country not just him and his deals that extended diversion of Arms to the anti-Sandinista Contra in Nicaragua. Though U.S Defense Secretary Caspar Weinberger had secretly warned Reagan administration against stationing U.S. Marines in Lebanon, the bombing of 241 American troops in Beirut is hard to forget.

The Iraq war is still draining American treasury. Most empires that failed over extended themselves beyond their abilities and capacities. There is no doubt that United States is the greatest power right now, no need to push it. This is why it is not difficult for the American people to become suspicious of politicians that are not as deliberative as Obama.

There are two opponents of Obama about Syria. On the liberal side are those that are just sick and tired of war.  The irony is that, so are libertarians on the conservative side. The other opponents are on the conservatives that think Obama let the world down by waiting to seek the approval of Congress when he could have gone ahead. They want him, not only to strike Syria hard, put to remove Assad from power. They have no clue how worse the next devil is.