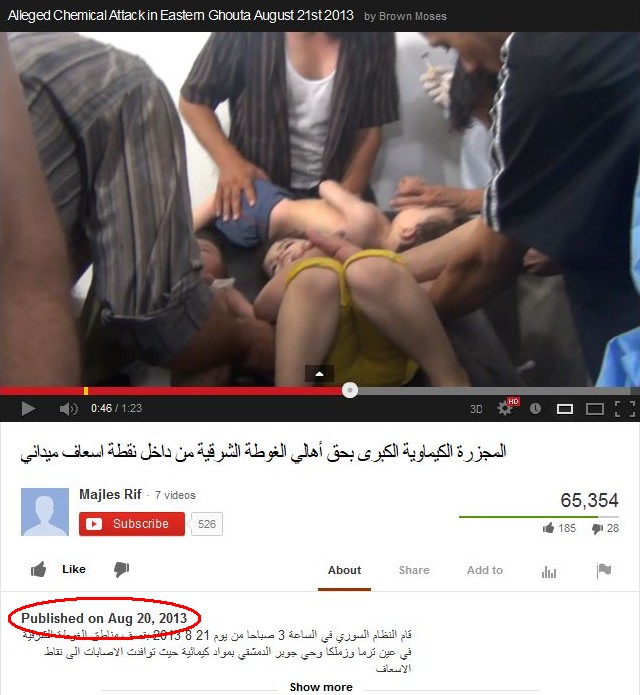 NewsRescue– This may be the biggest story you have ever read and may ever live to witness. It is straight out of a Robert Ludlum novel. And possibly his best one, yet to be written.

It all started on August 21st at about 3 am when there was a sudden burst of information about a major chemical weapons attack in Syria, and patients started streaming into hospitals.

We need to rewind a bit. It actually evidently started August 20th, when rebels already started uploading videos of the attack on Youtube, before it had happened. Camera’s and video recorders were handy and plentiful as tons of videos were hastily uploaded.

We can go back a bit further.

It is important we read this piece from Israeli born journalist, Yossef Bodansky in Globalresearch.ca, referenced yesterday by one of US’ top radio hosts, Rush Limbaugh:

On August 13-14, 2013, Western-sponsored opposition forces in Turkey started advance preparations for a major and irregular military surge. Initial meetings between senior opposition military commanders and representatives of Qatari, Turkish, and US Intelligence [“Mukhabarat Amriki”] took place at the converted Turkish military garrison in Antakya, Hatay Province, used as the command center and headquarters of the Free Syrian Army (FSA) and their foreign sponsors. Very senior opposition commanders who had arrived from Istanbul briefed the regional commanders of an imminent escalation in the fighting due to “a war-changing development” which would, in turn, lead to a US-led bombing of Syria.

The opposition forces had to quickly prepare their forces for exploiting the US-led bombing in order to march on Damascus and topple the Bashar al-Assad Government, the senior commanders explained. The Qatari and Turkish intelligence officials assured the Syrian regional commanders that they would be provided with plenty of weapons for the coming offensive.

Indeed, unprecedented weapons distribution started in all opposition camps in Hatay Province on August 21-23, 2013. In the Reyhanli area alone, opposition forces received well in excess of 400 tons of weapons, mainly anti-aircraft weaponry from shoulder-fired missiles to ammunition for light-guns and machineguns. The weapons were distributed from store-houses controlled by Qatari and Turkish Intelligence under the tight supervision of US Intelligence.

These weapons were loaded on more than 20 trailer-trucks which crossed into northern Syria and distributed the weapons to several depots. Follow-up weapon shipments, also several hundred tons, took place over the weekend of August 24-25, 2013, and included mainly sophisticated anti-tank guided missiles and rockets. Opposition officials in Hatay said that these weapon shipments were “the biggest” they had received “since the beginning of the turmoil more than two years ago”. The deliveries from Hatay went to all the rebel forces operating in the Idlib-to-Aleppo area, including the al-Qaida affiliated jihadists (who constitute the largest rebel forces in the area).

Several senior officials from both the Syrian opposition and sponsoring Arab states stressed that these weapon deliveries were specifically in anticipation for exploiting the impact of imminent bombing of Syria by the US and the Western allies. The latest strategy formulation and coordination meetings took place on August 26, 2013. The political coordination meeting took place in Istanbul and was attended by US Amb. Robert Ford.

More important were the military and operational coordination meetings at the Antakya garrison. Senior Turkish, Qatari, and US Intelligence officials attended in addition to the Syrian senior (opposition) commanders. The Syrians were informed that bombing would start in a few days.

“The opposition was told in clear terms that action to deter further use of chemical weapons by the Assad regime could come as early as in the next few days,” a Syrian participant in the meeting said. Another Syrian participant said that he was convinced US bombing was scheduled to begin on Thursday, August 29, 2013. Several participants — both Syrian and Arab — stressed that the assurances of forthcoming bombing were most explicit even as formally Obama is still undecided.

The descriptions of these meetings raise the question of the extent of foreknowledge of US Intelligence, and therefore, the Obama White House. All the sources consulted — both Syrian and Arab — stressed that officials of the “Mukhabarat Amriki” actively participated in the meetings and briefings in Turkey. Therefore, at the very least, they should have known that the opposition leaders were anticipating “a war-changing development”: that is, a dramatic event which would provoke a US-led military intervention.

The mere fact that weapon storage sites under the tight supervision of US Intelligence were opened up and about a thousand tons of high-quality weapons were distributed to the opposition indicates that US Intelligence anticipated such a provocation and the opportunity for the Syrian opposition to exploit the impact of the ensuing US and allied bombing. Hence, even if the Obama White House did not know in advance of the chemical provocation, they should have concluded, or at the very least suspected, that the chemical attack was most likely the “war-changing development” anticipated by the opposition leaders as provocation of US-led bombing. Under such circumstances, the Obama White House should have refrained from rushing head-on to accuse Assad’s Damascus and threaten retaliation, thus making the Obama White House at the very least complicit after the act. — Read full Yossef Bodansky

This puts us at or before August 13th. But to appreciate what is really happening in our world, we need to go back even further.

But we go back even further.

On July 23, an al Qaeda group attacked two Iraqi prisons and successfully freed more than 500 inmates, including senior members of the terrorist group. The attack was extremely well coordinated with mortars, suicide bombers and rocket-propelled grenades, these were coupled with systematic inmate riots and fires as CNN described it.

On Saturday, July 26, at a maximum security prison in Benghazi, Libya, there was an almost identical prison break to the one that happened in Iraq. There were riots within the prison, with fires set. Suddenly gunmen flocked upon the prison and opened fire. About 1,200 of Libya’s most deadly inmates escaped.

And midnight, July 29-30, Taliban gunmen with rocket launchers and suicide bombers, wearing police uniforms attacked the largest jail in Dera Ismail Khan, in a northern Pakistani province, releasing over 300 inmates. They came well coordinated, with rocket-propelled grenades and freed top militants–some of the Taliban’s most deadly men. They used loud speakers to announce the names of the men they needed. According to an official (Reuters), only 70 of the 200 guards on duty were at work that fateful night, suggesting higher level security-government involvement.

So we have the baddest al Qaeda generals released in coordinated and uncannily successful prison breaks from Libya, through Pakistan to Iraq. We recollect that with the release of these men, it got so hot that the US temporarily shut down its embassies in the Middle East. Interpol has suggested linkage between the international prison breaks.

The history of flow of jihadist warriors and al Qaeda fighters from all over the world to Syria is not worthy of further elaboration. Now we have the baddest terrorists in the world–the dogs are loose–and in preparation as we ‘read,’ to wreck deadly havoc on Damascus. The payback for their freedom. And then…

We have tarried enough. Now let’s get up to speed and connect the obvious.

Syria has been making gains against the FSA (Free Syria Army) and al Qaeda linked Al Nusra front in recent days. Bashar al-Assad recently bragged that the US used his country as grounds to send hated terrorists to their predictable death; further stating that unless there was a total foreign invasion, the rebels could NEVER have any success. With the help of Hezbollah, the Syrian army defeating the rebels in the Qusayr ‘mother of all wars,’ retaking the strategic Quneitra border town, and splitting their Aleppo home turf with them, Syria was poised to end the rebellion. Times got desperate, something had to be done. According to the Telegraph, the Syrian government ministry of reconciliation has even been receiving hundreds of ‘disillusioned’ rebel fighters who have been returning to the government side.

Desperation saw the Syrian rebels engage in acts of cannibalism and blatant terror, firing rockets into civilian villages and eating human parts on camera. Their character unveiled, they went after and kidnapped UN workers and slaughtered and killed children and Christian priests. Severally sending direct threats to the West who they blamed for failing them. To further compound events, the Egyptian president, Morsy who had lately attended a radical meeting in which Egyptians were encouraged to volunteer to replenish the anti-Syrian forces, faced troubles of his own, ending in his overthrow by military coup. The Turkish nation, a strong, vocal and strategic supporter of the war, also faced its own political problems, hence limiting Erdogan’s ability to muster support for Turkey’s continued engagement in the Syrian crises.

Again, something had to be done, and done fast. 100,000 Syrians have been killed in the war so far and over 2 million have fled to seek refuge. This war, which has already carried on for over two years, promises to continue for 10 more, at this pace. The effect on neighboring nations is also impossible to bear. Iraq has witnessed over 30-70 bombing and terror-related deaths every day for the last 2 months as a result of the fermenting arms and ‘bad’ men recruited to, and engaged across its border.

Finally, validating this ultimate story; in the news Yesterday, U.S. President Barack Obama admitted that his mission was not just a ‘shot across the bow’ to discourage chemical weapons use, but that plans were in motion to arm and assist the rebel ‘legions from hell’ against (and into the heart of) the Syrian regime.

The ultimate question that I leave you with as you recognize the insane reality of the active situation and leading features, is this- is the intentional poisoning of 355 MSF (1429 US/FSA) innocent people, too tall a sin to facilitate the launching of a coordinated victory hopeful endgame (or WWIII) attack?