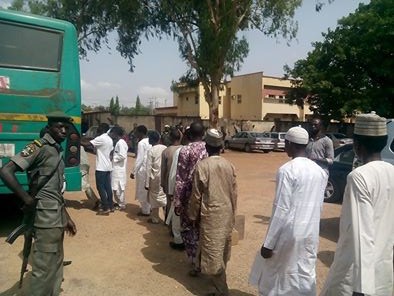 On Tuesday the 3rd of May 2016 Brothers of the Islamic Movement were brought to High Court located at NDA Junction Kaduna for the commencement of trial of various offences which include homicide and peace disturbance.

By 8:05am a long vehicle belonging to the Kaduna State Transport Authority, under tight security,  brought in the accused persons into the Court premises.

Hearing began at 9:20am when the Judge, Justice Hajara Gwada, took her seat. During the hearing, the Government Prosecutor Barr. Bayero Dari,  read out charges labeled against Muhammad Musa and  90 others who are  accused of homicide or murder and disturbance of peace. 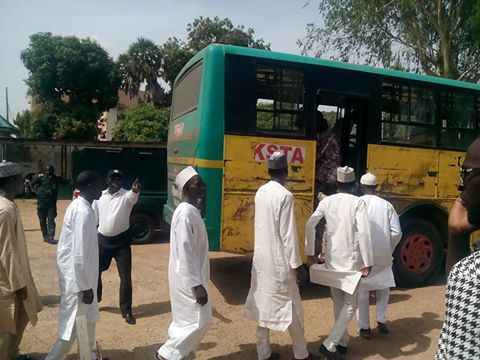 The presiding Judge HaJara Gwada, asked the Prosecutor to serve the charges to each of the accused person in the Court if he is ready for the case to continue, otherwise the case would be adjourned.

The prosecutor also argued that some of accused persons have not appeared before the Court, however, Festus Okoye said only 7 people did not appear today. Out the seven 6 were released for being Minor with injuries, while one person is sick, Okoye added.

The Presiding Judge Hajara Gwada adjourned the case to 1st of June 2016 to allow time for Government Prosecutor to serve Charges to the individual accused persons and for all the accused persons to appear before the Court.

Brothers were taken back to Prison custody under heavy security.

Nigerian Army massacred about 1000 people from 12 -13 December 2015 in Zaria. Hundreds others were put to jail since after massacre. However, various charges were labeled against them since the December attack in order to justify the action of Army. The latest charge is that of killing a soldier which cannot be verified as previous reports by both Army and Government did not indicate any loss of life on the part of the army.