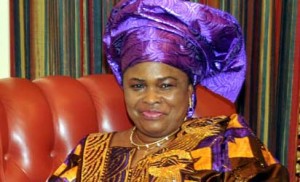 The First Lady of the Federation, Dame Patience Jonathan has donated three trucks load of relief materials to displaced victims of Boko Haram, even as Minister of State for Power,Hon. Mohammed Wakil visited camps of displaced people in Borno and Gombe states.

The Minister who represented the First Lady visited several camps on Saturday and delivered messages of hope from the President, Goodluck Jonathan and First Lady ,Dame Jonathan to hundreds of internally displaced people from Damboa, Gworza, Bama among others.

At the palace in Biu, the Emir, Mai Umar Aliyu commended President Goodluck Jonathan and the Federal Government for coming to the aid of displaced.

“We commend our President for his speedy response in this emergency. We commend our son, the Minister of power who though out of the country made adequate provisions for the displaced. We appreciate their concerns for us in this trying period”, the Emir said.

The minister also thanked the Emir and the Emirate Council for their support for the Federal Government in the fight against the insurgency, commending the people of Biu for kindly playing host to the displaced People of Damboa.

Wakil who was accompanied by a member of the Presidential Committee on the Distribution of Relief Materials to the North East States, Barrister Bashir Maidugu toured camps in Biu and Gombe and promised to continue the visitations in Borno to other camps on behalf of the Federal Government .

Delivering the message of the First Lady,the Minister told the displaced people that Mrs Jonathan empathised with all victims of Boko Haram attacks and that the relief materials were meant to meet the immediate needs of the refugees.

” The First Lady as a mother of the nation identify with my people in this trying times. She asked me to tell you she shares in your pain and she prays that Almighty God touches the hearts of the insurgents to lay down their arms and embrace peace”, Wakil said.

The Minister also convey the message of President Jonathan that he was doing everything necessary to end the insurgency and rebuild the war ravaging the North East.”Mr President asked me to tell you all that he has not forgotten you ,that he has taken five direct steps to tackle the insurgency and rebuild the displaced, among which are the ongoing strategic military campaigns, the setting up of the Presidential Initiative on North East handled by the Office

” Others are the Presidential Committee on the Distribution of Relief Materials, enhanced funding of the National Emergency Management Agency, initiation and encouragement of the Theophilus Danjuma led Terror Victims’ Fund. We thank Mr President not just for his passionate commitment to the resolution of the conflict, but for his direct involvement in the rebuilding and rehabilitation of the North East region”, the Minister told the displaced.

The Minister who later inspected the camps ordered relocation of the kitchen following the outbreak of cholera that has now been contained while also directing enhanced space and facilities for children undergoing their education in the camps.

Addressing hundreds of stranded commuters and truck drivers at the scene of the washed away road ,Hon Wakil said he would report to his counterpart in the Works Ministry to immediately take action on the damaged section of the road.

“I urge you all to be patient. This matter would be reported to my colleague at the Ministry of Works. I’m sure action Will be taken immediately”, Wakil told stranded drivers and commuters.