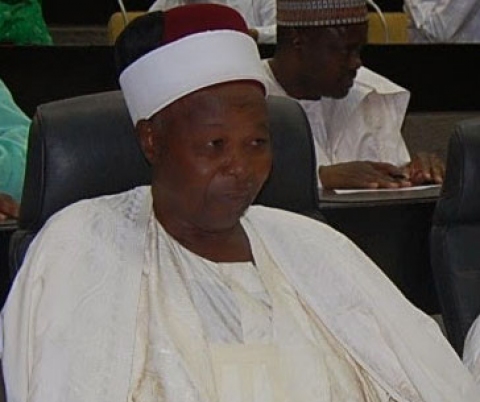 The Borno State Government has announced the murder of the Emir of Gwoza, Alhaji Idrissa Timta, by gunmen believed to be members of the Boko Haram militant sect.

A statement signed by Ambassador Baba Ahmed Jidda, the

Secretary to the State Government (SSG), said the emir was killed at about 9am today along Tashan Alade on the way to Biu town, headquarters of Biu Lo‎cal Government Area in Southern Borno.

He was in the company of the Emir of Askira, Alhaji Abdullahi Ibn Muhammadu Askirama and Emir of Uba, Alhaji Ali Ibn Ismaila Mamza, on their way to the funeral in Gombe today of the late Emir of Gombe. The emirs had elected to drive in the same vehicle to Biu to pick up the Emir of Biu to travel with them.

The SSG gave the sequence of events as follows: “The late Emir of Gwoza had visited his counterpart, the Emir of Uba ‎yesterday and passed the night in Uba ahead of their planned trip today. The two Emirs were this morning, joined by the Emir of Askira. The three drove in the same vehicle with the intention of going to Biu to be joined by their counterpart in Biu. Unfortunately as they were driving in convoy to Biu, they were ambushed by gun men around Tashan Alade, soon after passing Garkida. The gunmen came after the convoy, specifically targeted the vehicle conveying the three Emirs and opened fire. The Emir of Gwoza was unfortunately killed by the attackers while the Emirs of Askira and Uba escaped unhurt. A policeman in the convoy was shot by the attackers but he survived the attack.”

He described Alhaji Timta, a first class emir following his recent elevation by Governor Kashim Shettima, as a great man who worked very hard to promote peace and progress in Gwoza.

“He was a pillar and one of the rallying points in Borno State,” the statement said, adding that he has visibly worked very hard in the search for peace in Gwoza since the insurgency began.

“Borno State Government is terribly shocked by this incident,” the SSG said.  “The Government prays that Allah admits the late Emir into aljanna Firadaus and give family, members of the Gwoza Emirate Council, ‎the people of Gwoza, the State Council of Chiefs and the entire people of Borno State the fortitude to bear this very traumatic loss especially at a time the State is still dealing with equally disturbing issues related with security challenges in the State.”

He prayed for accelerated and lasting peace in Borno State and the rest of Nigeria.