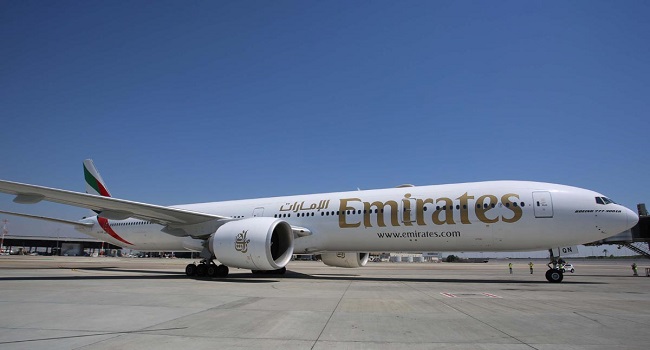 Emirates Airlines announced on Thursday that it will stop flying to Nigeria on September 1, 2022.

The UAE’s flag carrier announced the decision in a statement, blaming it on the inability to repatriate its earnings in foreign exchange from Nigeria.

This comes about three weeks after the airlines asked the Minister of Aviation, Hadi Sirika, to support the repatriation of $85 million in revenue. Nigeria is experiencing a forex crisis, which has caused the country’s local currency, the Naira, to depreciate against the US dollar.

Emirates airline’s Divisional Senior Vice-President (DSVP), International Affairs, Sheik Majid Al Mualla, said in a letter to the minister that the planned reductions in its operations in Nigeria would take effect on August 15, 2022.

It stated that flights at Lagos’ Murtala Muhammed International Airport (MMIA) would be reduced from 11 to seven per week.

“We had no choice but to take this action in order to mitigate the ongoing losses that Emirates is suffering as a result of funds being blocked in Nigeria,” the airline stated.

“As of July 2022, Emirates had US$ 85 million in funds in Nigeria awaiting repatriation.” This figure has been rising by more than $10 million per month as the ongoing operational costs of our 11 weekly flights to Lagos and 5 weekly flights to Abuja continue to mount.”

The airline said it cannot continue to operate at its current level “in the face of mounting losses, especially in the challenging post-COVID-19 climate” because the funds are urgently needed to meet its operational costs and maintain the commercial viability of its services to Nigeria.

“Emirates did try to stem the losses by proposing to pay for fuel in Nigeria in Nairas, which would have at least reduced one element of our ongoing costs,” it added, but the supplier denied the request.

“This means that, in addition to Emirates’ revenues, we must send hard currency into Nigeria to sustain our own operations.” Meanwhile, our revenues are unattainable, and we are not even earning credit interest.

“Your Excellency, we have not made this decision lightly.” Indeed, we have made every effort to collaborate with the Central Bank of Nigeria (CBN) to resolve this issue. Our Senior Vice-President met with the CBN’s Deputy Governor in May and followed up with a letter to the Governor the following month, but no positive response was received.

“Meetings were also held in Nigeria with Emirates’ own bank and in collaboration with IATA to discuss improving FX allocation, but with limited success.” Despite our best efforts, the situation continues to worsen. We are now in the unfortunate position of having to reduce flights in order to avoid further losses.”

It also requested assistance from the Nigerian government to address its financial constraints, which were described as a major issue for the airline’s operations.