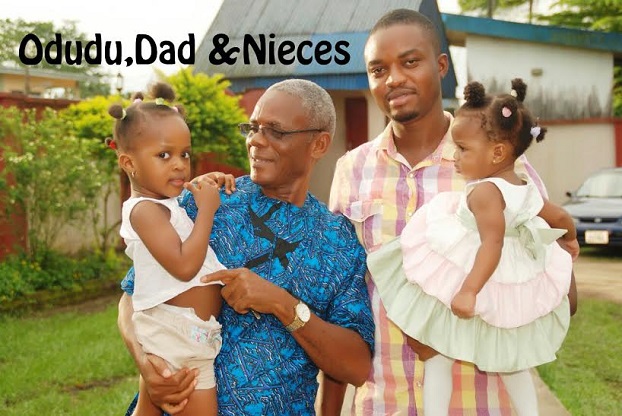 Citizen Odudu Albert Ukpanah is the only son of Late Engr. Albert Jimmy Ukpanah from Ukanafun Local Government Area of Akwa Ibom State. Odudu, 31, a brilliant and peace loving man holds a B. Sc. in Geophysics from the University of Calabar and an M. Sc. from Coventry University, United Kingdom.

The Late Engr. Albert Ukpanah was an outspoken chieftain of the ruling Peoples Democratic Party (PDP). He had served his party as a member of the State Working Committee of the PDP in Akwa Ibom State. He was also a one time Caretaker Vice Chairman of Ukanafun LGA of Akwa Ibom State.

Notably, aside being a thorn in the flesh of some prominent politicians and political office holders in his area, the late Engr. Albert Ukpanah was a vociferous opponent of the 2015 senatorial ambition of Chief Godswill Obot Akpabio, the Executive Governor of Akwa Ibom State.

Like several other persons in his area that subscribe to the PDP zoning policy, he believed that it was the turn of his area (Abak Federal Constituency) to produce the next senator to represent the Ikot Ekpene Senatorial District of Akwa Ibom State in the Senate come 2015. He saw Akpabio’s Senate bid as a grave injustice to his people.

On Wednesday March 12, 2014 he was brutally murdered by dare-devil assassins at his Abak residence at about 9:40pm.

From the cogent, uncontradicted and plausible account given by the immediate family of the slain politician, the deceased asked his son, Odudu, who was the only person with him at the material time to bring three (3) plastic chairs for himself and yet to be identified visitors that he was expecting. 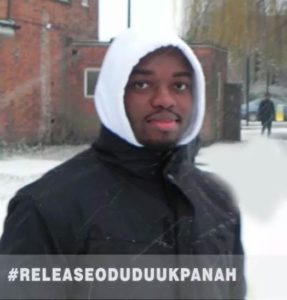 After bringing out the chairs as directed, Odudu went inside the living room and continued watching the European league which he was enjoying prior to the arrival of the visitors. His father later came into the living room and took drinks (Remy martins and 1 can stout), which he ostensibly offered his guests. Upon sensing that the expected meeting had lasted for too long, Odudu went out to check on his father only to meet him lying lifeless in the pool of his blood.

Mr. Odudu who was very deeply frightened immediately raised an alarm and sought the assistance of neighbours who came to his aid. They then helped him carry his father’s body to the hospital where he was pronounced dead by doctors. He made a report to the police division in Abak LGA where the incident took place the following morning after which one of his aunts took him away to Eket LGA for safety.

Therefore, while it is true that the police officers from the State Command did not meet him at home when they first arrived the scene, it does not imply that he escaped since the aunt had taken him away.

Let me also state that when the police officers from Abak arrived the scene, they saw the bottle of the Remy martins and the container of the can stout which they took away. Photographs evidencing this are there for all to see.

An investigation into the incident was taken over by the State Police Command which resulted in the production of a Police Investigation Report signed by one Sgt. Ibediro Nnamdi, the Investigating Police Officer, (IPO), which was leaked to the media and published by several newspapers in Akwa Ibom State, I have the report with me

For clarity and benefit of doubt, the opinion/recommendation part of the Police Investigation Report dated 25th March, 2014 and signed by the IPO, Sgt. Ibediro Nnamdi, is reproduced verbatim as follows:

“In view of the above findings, the following suggestions are proffered. Since investigation into the case is still on, it is wise to nose around for more information that may reveal the REAL KILLERS of Hon. (Engr.), Albert Ukpanah, AS THE KILLING MIGHT BE POLITICALLY MOTIVATED ASSASSINS.
Above report is for your consideration and further directive, please” (emphasis mine).

I need to also mention here that in furtherance of its investigation into this case, the police had seized the GSM phone of the late Albert Ukpanah with an undertaking that same would be forwarded to the State Security Service (SSS) for forensic analysis since the deceased is believed to had communicated on phone with his yet to be identified guests before their arrival.

Till date, nothing has been heard of the result of the said forensic analysis by the SSS. Nigerians should ask the Akwa Ibom State Government, the SSS and the police about the outcome of the forensic analysis. A check with service providers would have revealed the call logs of the deceased shortly before he was murdered.

Instead of identifying the ‘REAL KILLERS’ of Albert Ukpanah as recommended by the IPO, the Akwa Ibom State Government led by Gov. Godswill Akpabio went on a frolic and had his only son, Odudu Ukpanah framed-up, arrested and charged to court on a totally senseless and trump-up charge of killing his own father.

A careful perusal of the proof of evidence filed alongside the information (charge) by the prosecution leads irresistibly to the conclusion that the paper on which the charge was preferred, have a far more value than the charge itself. There is absolutely no modicum of evidence, not even impliedly, establishing a nexus (link) between Odudu and the death of his father. It is just an audacious but shameless charade meant to cover the truth.

Those listed as witnesses are basically neighbours who responded to the alarm raised by Odudu. One even said in court during his testimony that he did not know why he was in court but later recalled that he was summoned to testify because he had made a statement to the police; a statement that did not incriminate Odudu in any way.

What on earth will make a young Masters Degree holder in Oil and Gas from one of the reputable universities in the UK and a well fared and very comfortable first and only son of an influential father think of taking the life of the man that meant the world to him? Why should Odudu kill the very father that sponsored his education abroad and bought him a car upon his return to Nigeria last year? Why?, and why?

There is this frivolous and very irresponsible propaganda that has been sold to credulous
members of the public by agents of the state government that Gov. Akpabio had offered the deceased the sum of 2million naira on the day he was murdered to assist him in taking care of his wife’s failing health and that Odudu had killed the father to have the said money to himself.

Firstly, supposing without conceding that such money was actually offered to the deceased  by Gov. Akpabio, it is most unthinkable to say the least, for a sane person to even suggest that a person in the social and educational standing of Odudu will kill his father because of a paltry sum of 2million naira. This to me is a rape on logic and commonsense.

Secondly, did the governor called Odudu to inform him of his “generous offer” to the father? Since the governor had publicly admitted that he gave the said money, he should please tell us where and who the said money has been traced to?

Another lie being spread by the yes men of the government that I wish to puncture is the lie that Odudu broke the door to his father’s bedroom and carted away the purported 2mllion  naira. The truth of the matter is that one of Odudu’s aunts had advised the children of the deceased to search for and retrieve important documents for safety. Since the deceased had always locked his bedroom and the keys could not be found, the only option was to break the door. In the presence of relatives and neighbours, a carpenter was invited and he broke the door. This was in the evening of March 13, 2014 (a day after the incident).

As part of their investigation, the police had invited the carpenter to make a statement on what transpired which he did. Remarkably, the carpenter’s statement was discarded.

Since the emergence of the present regime in Akwa Ibom State in 2007, there has been an unprecedented upsurge in unresolved high profile politically motivated killings.

Quoting an annual report by the Nigeria Police Force, a Sunday PUNCH report of November 21, 2010 (page 3) said there were 74,064 murders and similar cases in Nigeria within two years.

A state-by-state analysis of this record ranks Akwa Ibom State with a population of 3.9m (2006 estimate) as being the highest with preponderance of such crimes. The police report said in 2009 alone, Akwa Ibom recorded 177 murders (most of which are said to be politically motivated), 62 attempted murders, one manslaughter, eight suicides, 21 attempted suicides, 320 assaults, 18 child stealing, 93 rape cases and indecent assaults, 29 kidnappings, among others. The 2011 figures marked a remarkable increase when compared to 2007.

Sadly, no single conviction has been recorded for these murders.

The innocent Odudu Ukpanah has been in custody for the past seven months while the state continue to play hide and seek with the case. So far, efforts to admit him to bail has not seen  fruition. On Monday December 15th, 2014 the court adjourned ruling on his bail application to January 7th, 2014.

The mother of Odudu is now critically ill with cancer. The family have expended all they have on litigation all in a bid to secure the release of the poor young man who they know is completely and totally innocent of the charge against him.

I am appealing to our friends and partners in the civil society, human rights community and the media to rise up to this very historic battle for justice. I appeal to human rights lawyers, activists, journalists all lovers of justice in this country to come to the rescue of this family. We have done it before, lets do it again. This is an injustice of the century.

Our voices must be heard for the Ukpanahs’. They have suffered enough, and it is time to put an end to this state sponsored madness and oppression. This seems to me a case where the killers are looking for the killers and the victims of the killing are being haunted to cover the truth.

Engr. Albert Ukpanah must not die in vain. His killers and their sponsors must not laugh last. His blood cries for justice and the time to act is now, not later.

Inibehe Effiong is a Human Rights Activist based in Lagos.