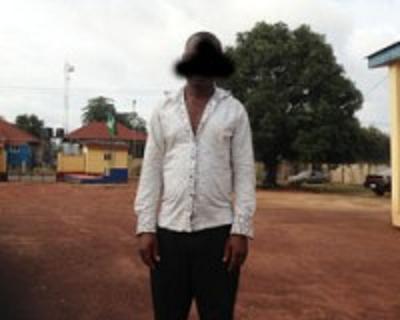 IT was meant to enable him solve some challenges, which according to him required huge sum of money, but it turned out to be his greatest undoing.

He may have been making fortunes out of it on each occasion, but in this particular venture, it really did not work, as he would now be required to tell the police and public how far he had gone living in deceit.

For Samuel Ani, a coffin dealer at Garki Market, this may not be the best of times as luck ran out on him over the weekend in his kidnapping business.

Until he was arrested by the operatives of the Anti-kidnapping Unit of the Enugu State Command, Samuel, who hails from Ugwuaji axis of Enugu South Local Council never knew that his sins would find him out soonest.

The Guardian gathered that Samuel had allegedly hid himself in a bush behind his shop for six days where he was making frantic telephone calls to his two younger brothers in a very convincing tone that he had been abducted and that the sum of N2 million was required to buy his freedom from the purported kidnappers or he would be killed.

It was gathered that, following report, the case was reported to the State Police Command who mobilized its anti-kidnapping unit to track down the kidnappers and perhaps, secure his release.

It was further gathered that when Samuel intensified his call that the purported kidnappers were on the verge of killing him should they fail to pay the ransom, which he claimed had been further reduced to N1.2 million, some amount of money was sent across to the account number provided by the purported kidnappers where his female accomplice went to cash an initial sum of N100,000.

Unknown to them, however, banks along Agbani Road, Enugu had been notified by the Police and it was in the process of making the withdrawal that the female accomplice was arrested.

The bank was identified as one of the new generation banks located on Agbani Road axis of Enugu.

The female accomplice was identified as Oluchi Ogbu Faith from Akpugo in Nkanu West Local Council and Samuel’s fiancée.

Police Public Relations Officer in the State, Ebere Amaraizu, who confirmed the incident, said, “On closer interrogations, Oluchi revealed that the account belonged to her but was instructed by Samuel to give the account number so that his brothers could pay the ransom via the account adding that Samuel instructed her to bring the cash to him as soon as she received alert of the payment.”

He said that her revelation led to the arrest of Samuel. Amaraizu said when arrested, Samuel claimed that he was not kidnapped but maintained that he kidnapped himself so that his wealthy younger brothers would pay money for ransom, which he would use to sort out his business dealings.

According to Amaraizu, Samuel maintained that outside what did, his brothers would not give him monetary assistance and regretted his actions.

“He pointed out that the step he took was not a good one before God, man or law and pleaded for forgiveness. He also revealed that he was  a father of five children but never revealed to Oluchi that he was married but promised to marry her, ” Amaraizu said.

Asked whether he used to make huge sales in coffin making, he said the business was not profitable, that he needed to trick the brothers to extort money from them in order to address his immediate challenges, which required huge amount of money.

The Police image-maker said that investigation into the ugly incident was in full scale by the operatives.