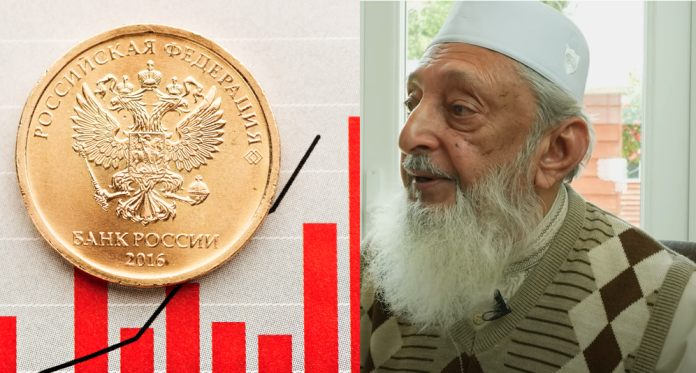 In this rare interfaith conversation between Exeter-based UK Column journalists, Alex Thompson, Brian Gerrish and David Scott and Sheikh Imran Hosein, interesting view points are brought to fore, which include that the introduction of money-tied-to-fictitious-value over money-with-integrity is at root in modern day ignorance and poverty. The discussion considers that the strength Russia maintains economically under Putin is based on the tying of the Ruble to real value. It is noted that despite the intentions of sanctions, the Ruble has risen to highest levels in 7 years.

Other matters considered are Muslim views of the end times with Imran Hosein narrating a Quran-based conversation between God (Allah) and Jesus, upon whom is peace. He says that God promises that Jesus’ followers will be superior to the disbelievers toll the end of days. The Imam suggesting that these true followers may have representation in the Russian orthodox Church.

˹Remember˺ when Allah said, “O Jesus! I will take you1 and raise you up to Myself. I will deliver you from those who disbelieve, and elevate your followers above the disbelievers until the Day of Judgment. Then to Me you will ˹all˺ return, and I will settle all your disputes.

Predictions are also made about the end times and the roles of Constantinople, now rebranded Turkey. A Medina city –Saudi Arabia, symbolising the world of Islam- in “forlorn desertion.” And these signs foretell the great war. And at this time, Jerusalem will rise to center stage in the world-as it is today- and “that part of the Christian world which is still faithful to Jesus, the son of the virgin Mary, that that part of the Christian world will receive his help and be victorious, and the part of the Christian world which is laden with sin, He will deal with them. That is in the Quran. That is in the Quran. So we already know the outcome of the great war which is coming, that modern western civilization will not play any significant role on the stage of the world after that great war. This is going to be a shock to them. Well this is Islamic eschatology talking, you better listen.”

And then comes a Muslim army’s conquest of Constantinople. Which the Sheikh says is to come and is not the wrongful conquest in 1453, which was a “bogus Jihad launched by a Sultan, an Ottoman Sultan named Mohammed Fatih sinfully so…”

The just released clip in highlight:

Watch also the first part of the interview published four days ago: