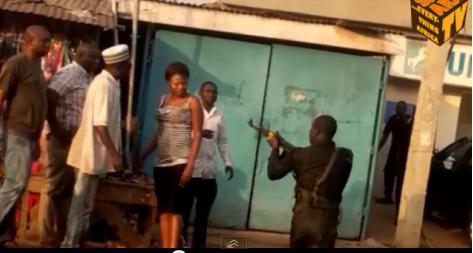 WARNING: THIS VIDEO CLIP MAY NOT BE SUITABLE FOR YOUNG VIEWERS. A drunken police officer with the Mobile Police, or Mopol, Unit #20, in Lagos, who was later identified as Tafa Mohammed, was caught breaking the law. A citizen video photographer captured officer Mohammed brutalizing two women with a hidden camera, filming this disturbing footage at a safe distance. This illegal action by the officer erupted when a street food vendor would not issue him fish to finish up his beer. The food vendor was said to have declined to sell fish alone, except to those buying food with it, a vendor policy that angered the policeman. Mohammed, a mobile policeman, was reeking of alcohol, say eyewitnesses to this event. Mohammed took on a female customer who was buying food from the same vendor at the time he got there, and threw her into a nasty pond of putrid muddy water.

This assault on the two women took place at Lewis Street, Lafiaji, Obalende on the Lagos Island. Mohammed is seen drawing a rifle and pointing it at one of the women, an act of ‘pistol whipping,’ and he was backed-up with the presence of a second MOPOL officer.

The torture reportedly caused internal injuries for the victim. A crowd of bystanders, and pedestrians can be heard shouting their displeasure at both officers. -SaharaReporters