Three top officials in the government of President Muhammadu Buhari played prominent roles in the reinstatement of Abdulrasheed Maina, ex-chairman of the Pension Reform Task Team (PRTT), into the civil service, TheCable can report.

Documents seen by TheCable showed the involvement and full knowledge of Winifred Oyo-Ita, head of the civil service of the federation; Abdulrahman Dambazau, minister of interior; and Abubakar Malami, minister of justice, in the deal gone sour.

The federal civil service commission dismissed Maina in 2013 for absconding from duty following a recommendation by the office of the head of service.

He was accused of being involved in pension fraud running into over N100 billion. After an investigation by the senate joint committee on public service and establishment and state and local government administration, a warrant of arrest was issued against him.

Subsequently, the police declared him wanted and he went into hiding. He reportedly fled to the United Arab Emirates (UAE). It was after his long absence from office that he was dismissed.

The Economic and Financial Crimes Commission (EFCC) also declared him wanted, while the INTERPOL issued a worldwide red alert on Maina, based on a request from the EFCC.

But four years later, Maina managed to find his way back into the civil service.

In a letter dated September 17, the Federal Civil Service Commission (FCSC) made a strong case for Maina’s reinstatement.

The letter, signed by Mustapha Sulaiman on behalf of the chairman of the commission, referred to previous correspondence on the issue.

The letter showed that while Dambazau and Oyo-Ita played supervisory roles, as committees under them made recommendations, Malami was actively involved. 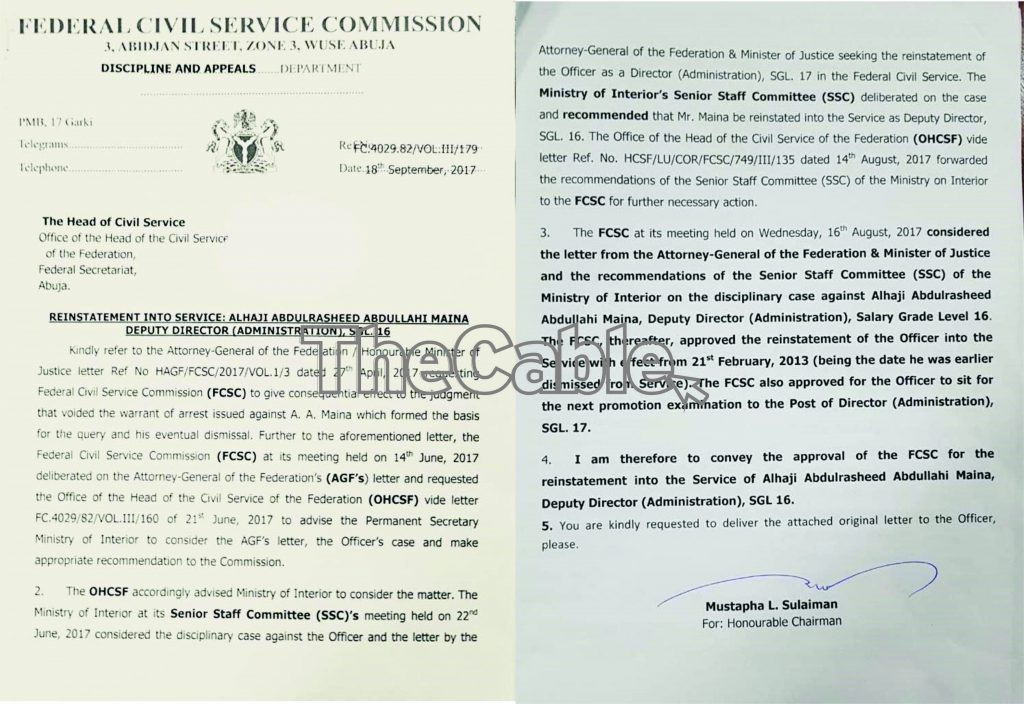 Letter to the head of service from the commission

“Kindly refer to the Attorney General of the Federation/Honourable Minister of Justice letter ref no HAGF/FCSC/2017/VOL.1/3 dated 27th April, 2017 requesting Federal Civil Service Commission (FCSC) to give consequential effect to the judgement that voided the warrant of arrest issued against A.A. Maina which formed the basis for the query and his eventual dismissal,” the letter read.

“Further to the aforementioned letter, the Federal Civil Service Commission (FCSC) at its meeting held on 14th June 2017 deliberated on the Attorney General of the Federation (AGF’s) letter and requested the Office of the Head of Civil Service of the Federation (OHCSF) vide letter FC.4029/82/VOL.III/160 of 21st June, 2017, to advise the Permanent Secretary Ministry of Interior to consider the AGF’s letter, the officer’s case and make appropriate recommendation to the commission. 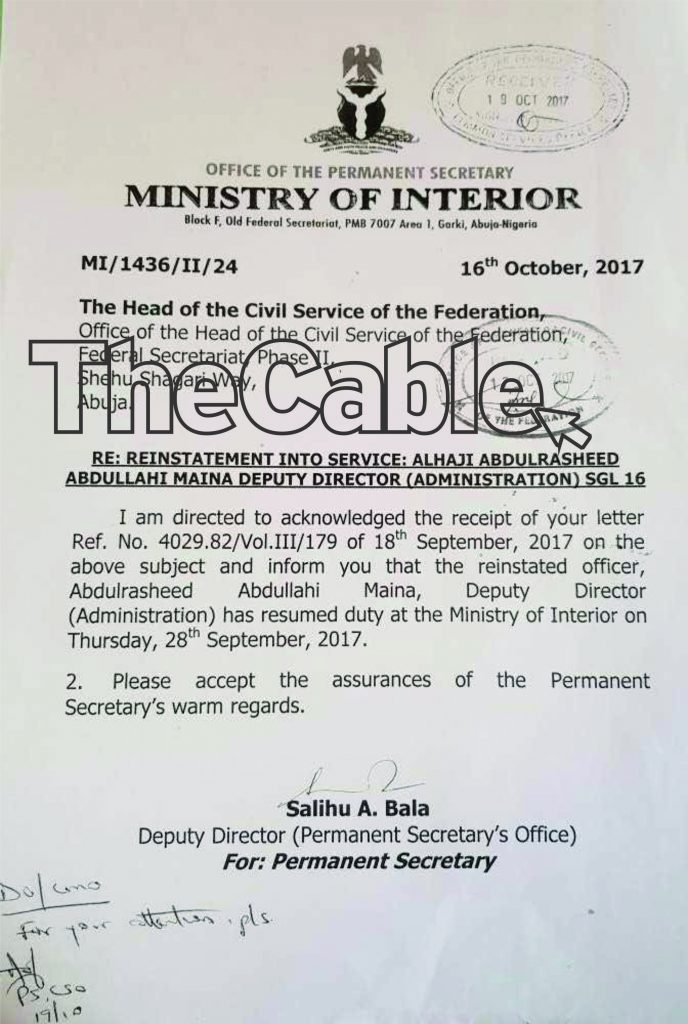 “The OHCSF accordingly advised Ministry of Interior to consider the matter. The Ministry of Interior at its Senior Staff Committee (SSC)’s meeting held on 22nd June, 2017 considered the disciplinary case against the officer and the letter by the Attorney-General of the Federation and Minister of Justice seeking the reinstatement of the officer as a Director (Administration), SGL.17 in the Federal Civil Service.

“The Ministry of Interior’s Senior Staff Committee (SSC) deliberated on the case and recommended that Mr Maina be reinstated into the service as Deputy Director, SGL. 16. The Office of the Head of the Civil Service of the Federation (OHCSF) vide letter Ref. No. HCSF/LU/COR/FCSC/749/III/135 dated 14th August 2017 forwarded to the recommendations of the Senior Staff Committee (SSC) of the Ministry on Interior to the FCSC for further necessary action.” 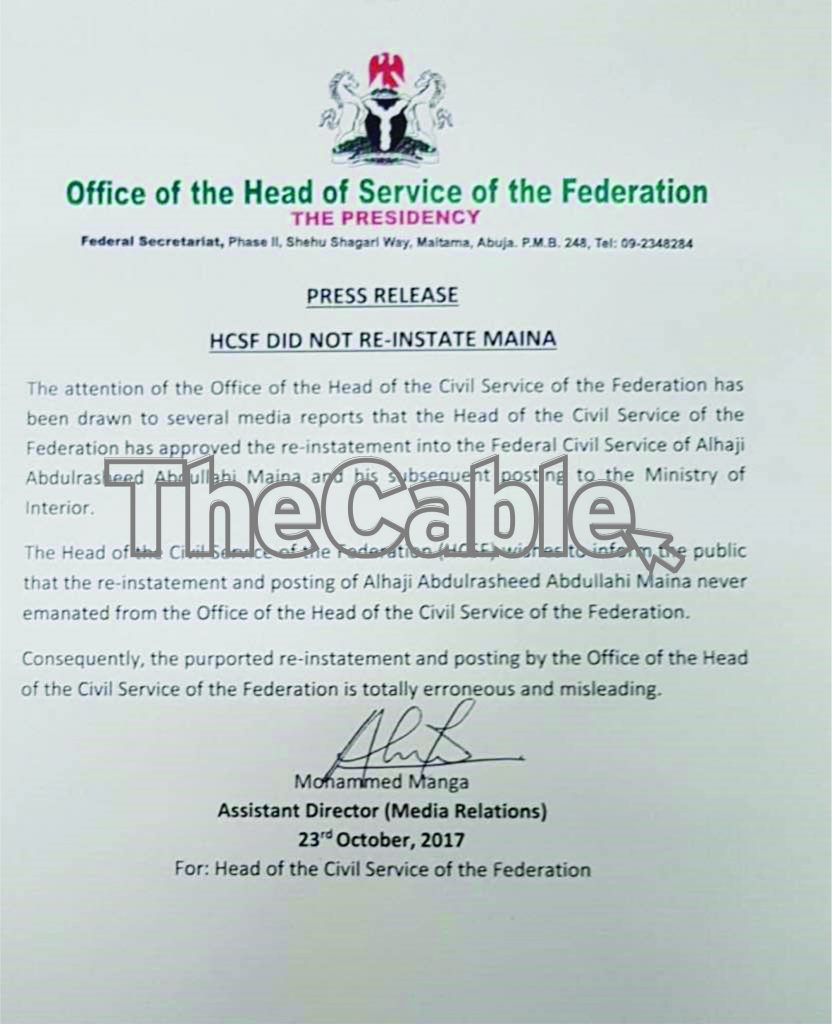 The letter also said FCSC had approved the reinstatement of Maina and directed that he should be made to sit for next promotion examination to the post of director.

Before former President Goodluck Jonathan appointed him to the pension team in 2010, Maina was an assistant director in the ministry of interior.

Shortly after he gave the order, Oyo-Ita issued a three-paragraph statement denying being behind the controversial recall.

Earlier, Dambazau had distanced himself, passing the buck to Oyo-Ita.

WHAT NEXT FOR BUHARI, PremiumTimes Asks

The presidential spokesperson, Mr. Adesina, confirmed on Monday night that Mr. Buhari had received the report by Mrs. Oyo-Ita.

Speaking on Channels Television, Mr. Adesina said the report was submitted to the president’s chief of staff, Abba Kyari, on Monday evening as directed.

However, many Nigerians are wondering if Mr. Buhari would take any decisive step on his minsters who ordered such recall of a fugitive.

Human Rights lawyer, Jiti Ogunye, argued that Mr. Buhari has no legal powers to order the sack of Mr. Maina, but has such powers to dismiss his aides who engineered the recall.

“But the President has the power to sack his AGF, the Minister of the Interior and any political appointee including his Chief of Staff who are reported to have masterminded and orchestrated the Maina fiasco,” Mr. Ogunye said.

“So, the President has left those he could sack and has gone for the head of the one he could not lawfully sack.

“It appears to be forlorn hope that the President will move soon against the members of his kitchen cabinet who are hatching one plot of dent for him after another.”

While Nigerians await the president’s action, Mr. Maina continues to be a fugitive and has refused to submit himself to the EFCC which accuses him of involvement in a N2 billion pension fraud.

On Monday, the anti-graft agency stormed his alleged $2 million dollars house and marked it as being under investigation.