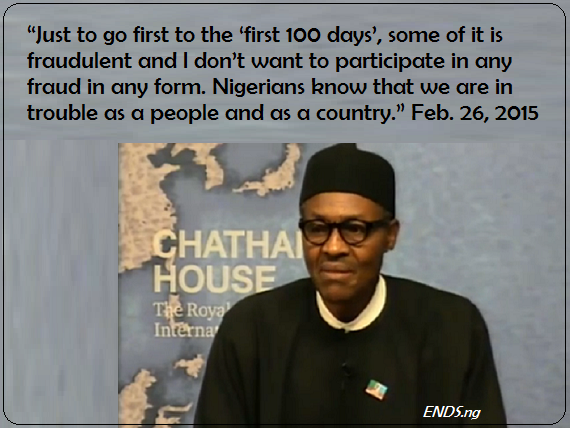 It is rather troubling to see that certain elements are still peddling the fallacious 100 day so-called covenant attributed to the person of our distinguished President.

Whereas all evidence overwhelmingly proves that President Muhammadu Buhari never made such puerile, ridiculously ambitious promise to fulfill the impossible-in-years within weeks, certain misinformed and misled media and persons still insist on peddling this latest slanderous allegation against our gentle and reasonable President.

There is no better evidence of Buhari’s position in regards to the so-called document than his extensive denouncement and vilification of said document in all forms as he delivered in unscripted answer to a related question at the Chatham house in February of this year ahead of the Presidential elections.

Buhari called the so-called covenant document a fraud. The President, a candidate then, went ahead to thoroughly debunk and discredit the alleged covenant in the most unambiguous and extensive terms.

“I respect the question (about high expectation in first 100 days). Quietly I was thinking about this high expectation. Those who are following the train of our campaigns and seeing how people are turning out, some becoming emotional and crying, I am really getting scared. If I get there they will expect miracles within the next few week or months.  That will be very dicey, handling that one. And I think we have to have a deliberate campaign to tamper high expectations with some reasonableness…on the part of those expecting miracles to happen.”

“Just to go first to the ‘first 100 days’, some of it is fraudulent and I don’t want to participate in any fraud in any form. Nigerians know that we are in trouble as a people and as a country.” 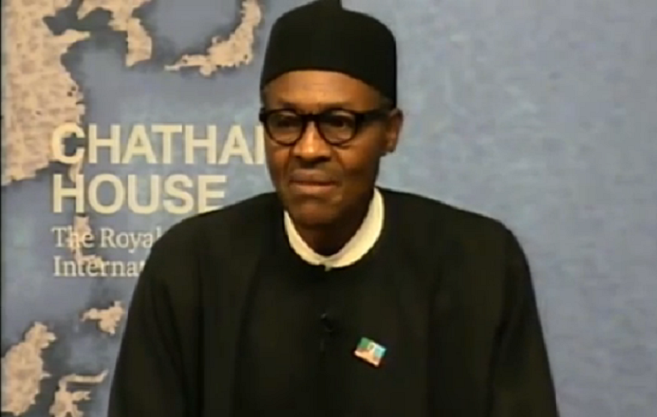 When we get there we will quickly get correct intelligence of what is on the ground and inform Nigerians and just in line with what I have just read. We will make sure that the misappropriation and application of public resources will not be allowed. You would be surprised by how much savings we will realize. That saving will be ploughed back into development and this is what I can promise. But I would remove that ‘100 days’ mischief/mystery that some politicians have created.”

Buhari in his unsurpassed honesty admitted that some politicians were pushing the fraud which he denounced and condemned as a fraud.

It is therefore not surprising that no mainstream media house published this fallacious, juvenile and rather dangerous document before the elections scheduled initially for February 14th. While the said document had been in circulation on social media and informal media since January. This goes to prove that no official media representative of the APC party or Buhari campaign committee distributed the article.

We challenge those claiming the said document was authorized by the APC party or person of the President to substantiate their allegations with evidence of their publication of said critical media document. Why, we ask, did they not publish it? Was this an attempt to diminish the Buhari campaign if they believed the document was authentic? The only logical and plausible reason why no mainstream media published the said document before Buhari’s public rejection of it at the Chatham house was because they did not receive it from Buhari or official APC publicity arms.

Attempting to validate the document, certain media pointed to a Vanguard mischievous publication of said covenant on March 17th, two months after it had beeen in circulation and only after Buhari had clearly and in no ambiguous terms denied the covenant as a fraud at the Chatham house.

We have dealt with just too many of these slanderous and libelous campaigns from Jonathanians. Over the years we have painstakingly cleaned up malicious billions of dollars financed attempts to tarnish President Buhari’s image. A purposeful malicious and demonic mispresentation of his statement that the declaration of a state of emergency by Jonathan and Ihejirika was not intended to defeat Boko Haram but was their ploy to attack and cripple the north (economy wise) was converted in misleading media captions to “Buhari Says, An Attack on Boko Haram is an Attack on The North.” With no evidence of such statement in any of the media stories. We cleaned that up. Buhari also rejected that alleged statement at the Chatham house when asked.

We also cleared up an accusation that Buhari threatened to make Nigeria ungovernable. We proved that PDP stalwart Lawal Kaita was the northerner who made the statement in reference to PDP internal politics. We also informed many who did not know, that due to these malicious libel attacks, Buhari took Jonathan’s spokesman, Reuben Abati and the Guardian paper to court over the “ungovernable” slander statements and won over them. We pointed out that then president Jonathan had to beg Buhari to settle with his men out of court and that Reuben and the Guardian were compelled to publish an unreserved apology to the person of Muhammadu Buhari for these well sponsored and orchestrated malicious slander campaigns that have left much irreparable damage to his reputation.

We strongly implore the media and social active persons to turn off campaign mode. It is time for progress and responsibility. While we acknowledge that the so-called 100 days covenant was evidently spun by members of the APC, there is however no iota of evidence Buhari or the official media arm of the party ever approved the message. We challenge anyone to prove that Buhari approved the message.

We realize that unfortunately some Nigerians were misled into believing it. Some even made elaborate fact-check websites to rate Buhari based on these assumed campaign promises. We understand that rather fortunately, in our view, some Nigerians voted for Buhari based on it. Thank God for that. By any means necessary Nigeria had to be freed from the reign of terror, theft and tyranny.

However with Buhari clearly distancing himself from the fraudulent document as soon as it was circulated, we must refrain from further insulting his intelligence as a well weathered president who knows better than to make juvenile promises. It took ENDS analysts barely a minute to determine the covenant as fake. Immediately we read the childish promises, eg- to provide food for pupils within 100 days; which involves budgeting, getting caterers, food quality establishment and unspecified logistics, we knew it was a hoax. We immediately searched the APC website and saw no evidence of it. We checked SaharaReporters, it was not there. We checked PremiumTimes, Vanguard, Punch, etc and saw it was no where. Immediately we concluded with 100% confidence that is was a sweet and ambitious campaign material made (with chunks of truth) from actual non time limited campaign manifesto promises, by zealous APC young politicians who had never been in positions of authority.

On behalf of Buhari, we apologize for your confusion; Buhari did not author or approve it. The one promise Buhari clearly made was to rescue Nigeria from the plague of misappropriation of funds to the betterment of Nigeria. And on this promise he is delivering beyond measure.