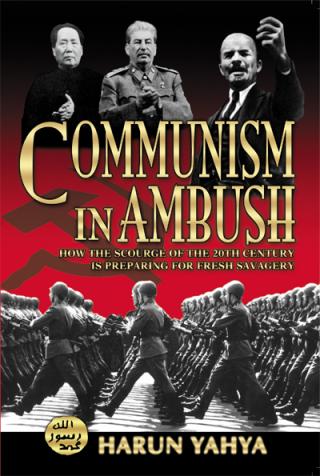 Communism is an ideology in which anyone who does not hold communist views is excluded and regarded as belonging to the “others.” Proponents of this ideology regard themselves as “progressive,” labeling others as “reactionary” or “fascist,” and pressure that section of society. History is full of examples of such repressive practices. One sentence from the “Dictionary of Materialist Philosophy,” one of the most popular philosophical publications in the 1950s and 60s, strikingly summarizes the whole procedure. The dictionary describes the word “fascist” as meaning “someone who is not a communist.” That distorted mentality has come down unchanged to the present day.

The idea of communism is presented to the masses under the slogans of equality, freedom and independence. However, examination of practices in communist countries reveals a mechanism of total repression, in which, in complete contrast, freedoms and equality have been restricted and in which different shades and voices have not been permitted to exist. Examination of world political history reveals that mass slaughter, unsolved killings and non-judicial executions have taken place in all countries ruled by communist regimes. Concepts such as religion, free trade and individual rights and freedoms are the main enemies of communist administrations. This system, which uses the concept of freedom as a screen on the road leading to “the dictatorship of the proletariat,” in their words, attaches almost no value to people’s lives and labor, and merely looks to see what the ideology it represents can gain from them.

The history of communism is full of incidents of pain and suffering perpetrated in the framework of that perverse mentality. The killings committed in countries such as the Soviet Union, China and Cambodia have gone down as a black mark on the history of mankind.

Stalin, one of the most popular figures in the Soviet Union, was in fact a dictator. During Stalin’s time, 6 million people died of starvation and poverty in the famines that took place in Soviet territory. That was not the end of the barbaric policies implemented by Stalin, who regarded human life as worthless. During the Siege of Stalingrad, one of the bloodiest battles of the World War II, 1.2 million Russian troops and civilians are estimated to have been killed by the German Army as a result of Stalin commanding to “attack, no matter what the cost.” Regarded as paranoid and mentally ill even by those close to him, Stalin had millions of people he accused of not being communists put to death, including close colleagues and party officials. He is even alleged to have had his own wife put to death…

The bloody history of communist ideology is by no means limited to the time of the Soviet Union. Similar barbarity was taking place in China at around the same time. Under the leadership of Mao Zedong, the Chinese Communist party soon turned the state administration it took over promising “power to the peasant class” into a ruthless machine for grinding human beings.

A chain of nationwide slaughter known as the Cultural Revolution was initiated at Mao’s personal command in 1966. Mao claimed that communist ideas had still not been sufficiently implemented. This command that led directly to the slaughter in which even the senior party leadership, including his own friends, would be killed went down as one of the worst horrors in history. “Red Guards” largely made up of young people poured onto the streets at Mao’s command and detained professors, lawyers, university teachers and in short everyone whom they regarded as “opposed to communism” in their own eyes. They then tortured, humiliated and executed them. The savagery assumed such a form that not even Mao’s closest friends and party officials were able to save their lives.

In later years, the Cambodian communist dictator Pol Pot, who adopted Mao as a role model, condemned everyone who wore spectacles in his country to death. These inhuman ideas of Mao’s were made clear in his own words in a BBC TV documentary titled “Mao’s China – One Man’s Revolution.” Mao, who once told the British ambassador of the time, Sir Percy Cradock, that he compared himself to the first Chinese emperor, Qin Shi Huang, described how the emperor had sentenced 460 intellectuals to death, while he boasted of sentencing 46,000 to death.

As can be seen from the examples of the Soviet Union and China, communism is an ideology that recognizes no right to life or freedom of ideas, even for its own supporters. The frequent arguments among them have always led to violence and conflict. Communist organizations accuse one another of revisionism and opportunism on a great many subjects and always claim that their own views are the best. But they allow no right to life for those who hold any other views.

Communist ideology advises its supporters to employ methods such as “silencing others,” and “the use of force.” It is therefore impossible for any other idea to be expressed or developed or even to exist anywhere in which communist thinking is present. The way that communist organizations employ slogans along the lines of “You are not welcome here,” “We will not let you speak here,” “Get lost,” and “This place belongs to us” in their demonstrations is a clear manifestation of that repressive mentality. The impositions imposed by ideologies whose aim is to produce a single type of society stem from their lack of confidence in the system they advocate.

If communism really favored freedoms, as it maintains, and more importantly if it really trusted its own intellectual structure, it would never resort to silencing people. On the contrary, it would espouse the free expression of all opinions. Loveless, harsh and soulless communism can only exist and grow strong in a climate of ignorance and repression, not in one where freedoms are permitted.

Yet the human soul desires freedom and delights in thinking freely. Indeed, in the Koran God encourages the elimination of all burdensome pressures and desires societies to live in freedom and ease. Jews and Christians and Buddhists can all express their ideas as they wish in an environment in which religious moral values prevail. Atheists and irreligious people and communists also express their opinions as they see fit. Religion does not force people into a single template.

The way by which the evils caused by ideologies that repress people’s minds and lives at every moment can come to an end is through the moral values of the Koran. The love, understanding, liberty and rationality that our Almighty Lord commands in the Koran are a recipe for liberation for all those suffering under repression.