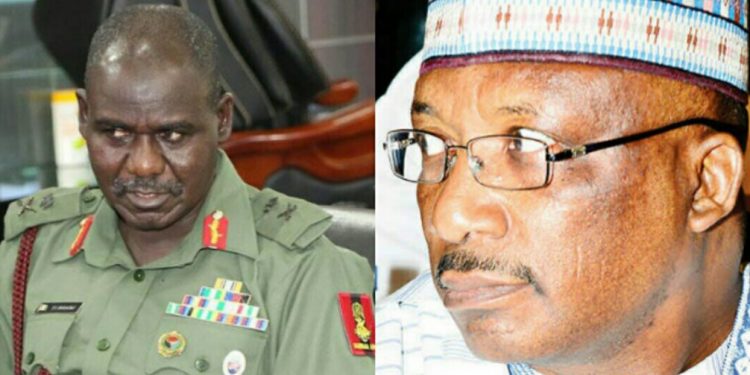 President Buhari’s critics on Friday carpeted his government for allegedly lying about the terms of reference of the latest interim reports on the ongoing probe into arms procurement by successive governments since 2007.

Mr. Buhari had on August 24, 2015, raised the Committee on Audit of Defence Equipment Procurement in the Nigerian Armed Forces to keep with his “determination to stamp out corruption and irregularities in Nigeria’s public service.”

But many are now raising concerns not about what the committee included in its latest report but what it might have deliberately left out.

The investigative committee submitted its third interim report on Thursday which detailed how former senior military officers, political appointees and private individuals allegedly channeled security funds into their pockets while the war against Boko Haram floundered.

Among the big names the report indicted were Azubuike Ihejirika and Kenneth Minimah. Both served as Chief of Army Staff under President Goodluck Jonathan.

But government critics immediately raised concerns about the exclusion of the name of a close ally of Mr. Buhari and the current Minister of Interior, Abdulrahman Dambazzau.

Mr. Dambazzau served as the chief of army staff between 2008 and 2010 and critics said it was highly curious that he was not investigated even when the probe was designed to capture all procurements from 2007 to 2015.

Our findings show that those accusing government of doctoring its latest arms panel may have a point.

In an attempt to ward off allegation of bias, the Buhari government, via a statement from the office of the Minister of Information and Culture, Lai Mohammed, said Mr. Dambazau’s name was not included among those indicted because the third interim report only looked into procurement and contracts awarded for and by the military between 2011-2015.

“When the documents regarding procurement from 2007 to 2010 are available and scrutinised, the committee will then issue its report on that,” Mr. Mohammed said in a statement signed by his media adviser Segun Adeyemi.

“The audit is being done in phases, and the report that was released on Thursday is the third of such.”

A PREMIUM TIMES’ examination of the report showed that the terms of reference in its heading said it queried all procurement from 2007 to 2015.

“Press Release on the Third Interim Report of the Presidential Committee on Audit of Defence Equipment Procurement from 2007 to 2015,” it read.

The first paragraph of the seven-page report also indicated the 13-member committee used 2007-2015 as reference.

“In continuation of its assignment, the Committee on Audit of Defence Equipment Procurement (CADEP) in the Nigerian Armed Forces, analysed procurement contracts awarded by or for the Nigerian Army between 2007 and 2015.”

PREMIUM TIMES also observed that in page two of the report, the committee looked into procurement far back as 2005, two years earlier than 2007.

“Similarly, between 29 April 2005 and 19 October 2010, the MOD (Ministry of Defence) awarded 2 contracts to Progress Limited for the supply of 42 units of BTR-3U Armoured Personnel Carriers and spare parts for the Nigerian Army.

“However, neither the MOD nor the NA could provide the contract agreements to ascertain the cost of the APCs. Although 26 of the APCs were delivered in 2007 and immediately deployed for Peace Keeping Operations in Sudan, the APCs scandalously broke down on induction,” the report read in part.

In page four where the committee looked into tax infractions in the military, it was also revealed that the members looked beyond 2011.

This newspaper also reported on July 7, citing top administration sources, that Mr. Dambazzau’s name was amongst those indicted by the panel and that he was making concerted efforts to have his named removed.