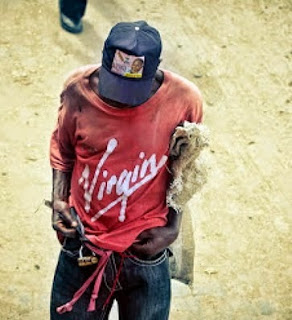 oday Tuesday May 20th, the Lagos State Police Command revealed that it had arrested a suspected mad man (not actual image above) for allegedly being in possession of arms and ammunition.
The spokesperson of the command, DSP Ngozi Braide, disclosed this during an interview with the News Agency of Nigeria in Lagos.
Braide said that the suspect was arrested on Saturday at Gowon Estate, Ipaja, Lagos.
Braide told NAN that the suspect was allegedly seen at 5th Avenue, Customs Junction, Gowon Estate, Ipaja, while trying to empty some items into a dust bin.
She said:
“The people were curious about what he was dumping.
“Upon closer examination, it was discovered that the mad man emptied one locally-made double-barrel pistol and four live cartridges into the dust bin.
“The youths in the community claimed they have been seeing him around the area as a mad man.
“He was immediately handed over to the police at Gowon Estate but under interrogation, he was not coherent in his speech.
“He was later transferred to the State CID, Panti Street, Yaba, for further investigation.”
Braide commended residents of the Gowon Estate,
Ipaja for their vigilance and security consciousness and urged them to continue to assist the police with useful information on suspicious movements.