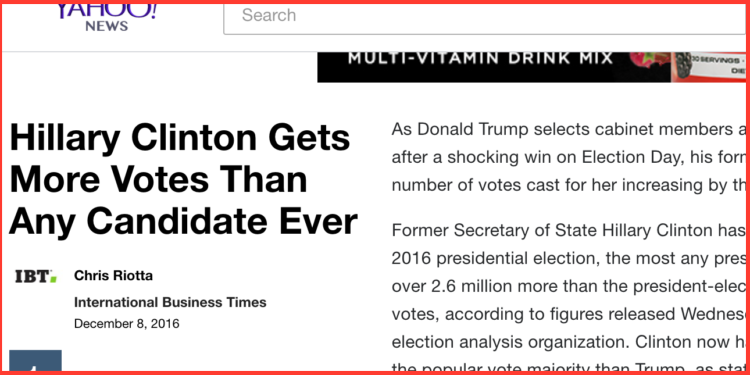 Update, Friday Dec. 9th: Since our publication Yahoo has deleted the FakeNews story

More FakeNews from the Main stream media. Yahoo News Thursday published an article claiming Democratic party candidate Hillary Clinton got the most votes in History during the November presidential elections.

Changing the caption of an article published in International Business Times, IBT, Yahoo claimed Hillary’s 65,527,625 votes was the highest in history. The original article by Chris Riotta in IBT had no such ridiculous fallacy. IBT’s article was captioned, “Latest 2016 Popular Vote Election Results: Clinton Leads Trump By 2.6 Million, Margin Grows As Votes Continue To Be Counted.”

“Former Secretary of State Hillary Clinton has garnered at least 65,527,625 votes in the 2016 presidential election, the most any presidential candidate has ever received and over 2.6 million more than the president-elect, who has received at least 62,851,436 votes…”

The IBT story did not have this paragraph which was perhaps edited out or never included. There is no way to tell.

Former Secretary of State Hillary Clinton has garnered at least 65,527,625 votes in the 2016 presidential election, over 2.6 million more than the president-elect, who has received at least 62,851,436 votes,

Of course the Yahoo story was purely FakeNews.

Even when Obama beat Mitt Romney in 2012, he got 500 million votes more than Hillary’s current count.

The BBC just published another FakeNews article in which it vexed with UK foreign secretary Boris Johnson for saying the truth about Saudi Arabia’s abusing and twisting religion to wage various proxy wars in the Middle East.

After many commentators did not notice the lies, a few who later did poked at Yahoo’s FakeNews promotion.

Ed said, “Just more fake news…… now put the criminal in prison…. the main stream media is a joke and they still dont get it…… all main stream is fake news.”

Jack said, “apparently “ever” only goes back 4-7 years. she’s still 4 million short on votes when compared to obama.”

Floyd was not so kind: “Actually, I think the most distressing and depressing part of this article is when it says she got 65,527,625 votes. That means all those people voted for a common criminal, known felon, treasonous wretch and pathological liar. Clinton had more baggage then any other 10 candidates ever could have conceived of and yet still, they voted for her. Clinton voters had no class, no integrity, no honor and no character. When commented to that they voted for a crook, their common response is: “Yea, she may be a crook, but she is my crook.” Yep…typical dumbocrap; IQ of a brick and common sense to match. I have no respect for any of them.”