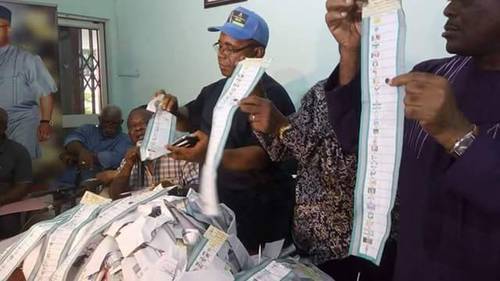 The attention of the Akwa Ibom Progressive Women Organisation (AKIPWO) has been drawn to reports in the media of an ongoing purchase of Permanent Voters Card (PVC) in Akwa Ibom State in anticipation that the shambolic and globally criticised governorship election of April 11, 2015 in the State may be cancelled by the Courts. We have indeed confirmed that this criminal action are be perpetuated from village to village, especially where they think the All Progressives Congress (APC) has a strong support base in the state.

We are constrained to react to this unwholesome attack on the collective power of our people to choose who should lead them, not just in the current dispensation, but in the future, because our ability to use our votes to determine our future and the future of our children is under a devilish threat by evil men. Those who are desperately buying up these PVCs are the enemies of our State, who would rather benefit from their nefarious undertaking today without an iota of concern to the overall interest of the State in the future.

What these evil men are doing will permanently rob their victims of ever voting in any election again in Nigeria. They are denying our people not just the opportunity to elect their governor forever, but also who becomes the president of Nigeriatomorrow. They are going to rob them of all the benefits of owning a PVC, which includes a means of identification and any other thing the country would need it for in the future, apart from being used for the purposes of elections. It will deprive our people the required vote in future elections in Nigeria.

We are calling on the elites of these rural communities to educate their people that if Governor Akpabio and his men should have their way buying up the PVCs, it is the people of those areas that will in future bear the brunt of such unpatriotic activities. Akwa Ibom State will last beyond Godswill Akpabio and his unmitigated impunity.

These criminals used the security apparatus in Nigeria, including the Police, Army and the SSS, in collaboration with Akpabio’s armed fake police and soldiers to deny our people their right to vote. They killed and maimed our people and declared themselves winners. Now that the reality that the election would be cancelled and a fresh one conducted under a different security atmosphere has dawn on them, they have resorted to disenfranchising our people. But we will resist their evil plans. We deserve to elect our governor through our votes and not through the guns.

Dear Akwa Ibom women, it is time to regain your self pride. Do not relinquish your PVC. Your vote is your power. Have you stopped to ask why Akpabio is so desperate to install Udom Emmanuel? Have you stopped to ask why Unoma Akpabio should be the one to anoint a governor for Akwa Ibom people and they use our innocent children as militias to enforce their will on us? The time to say no to Unoma is here. Don’t sell your PVC, it is your weapon to revenge the uncommon poverty and lack inflicted upon you, with the intention to make you their family slaves for ever. Our people are self-respecting; we resisted being enslaved by our neighbours in the past, this time, this internal colonization will also be successfully resisted.

Akwa Ibom cannot be governed by Akpabio and his family through Udom Emmanuel (the wrangling already going on in sharing offices in their temporary contraption should be an eye opener to our people). Our people will resist this and the weapon of that resistance is their votes, so do not sell your PVC. We know it is difficult to refuse to accept the money they dangle before you. That was their plan from the beginning; they wanted to make you cow before them. They wanted to make you crawl in obeisance to them because of poverty and that is why they made you so poor in a state that is the richest in the country. They can only succeed if you let them.

We can still rescue our State from their evil stranglehold. We have the capacity to do this. We shall stop them from throwing us into a state governed by armed vagabonds and criminal cultists. We must join the rest of the country in this glorious march to change in the best democratic tradition. We must not be seen as the odd ones in this growing democratic trend around the country. Don’t allow them deny you of your right to choose. Nigerians are watching us. We must not fail our state.

This is a clarion cry to our people. God bless you all. God bless Akwa Abasi Ibom state.