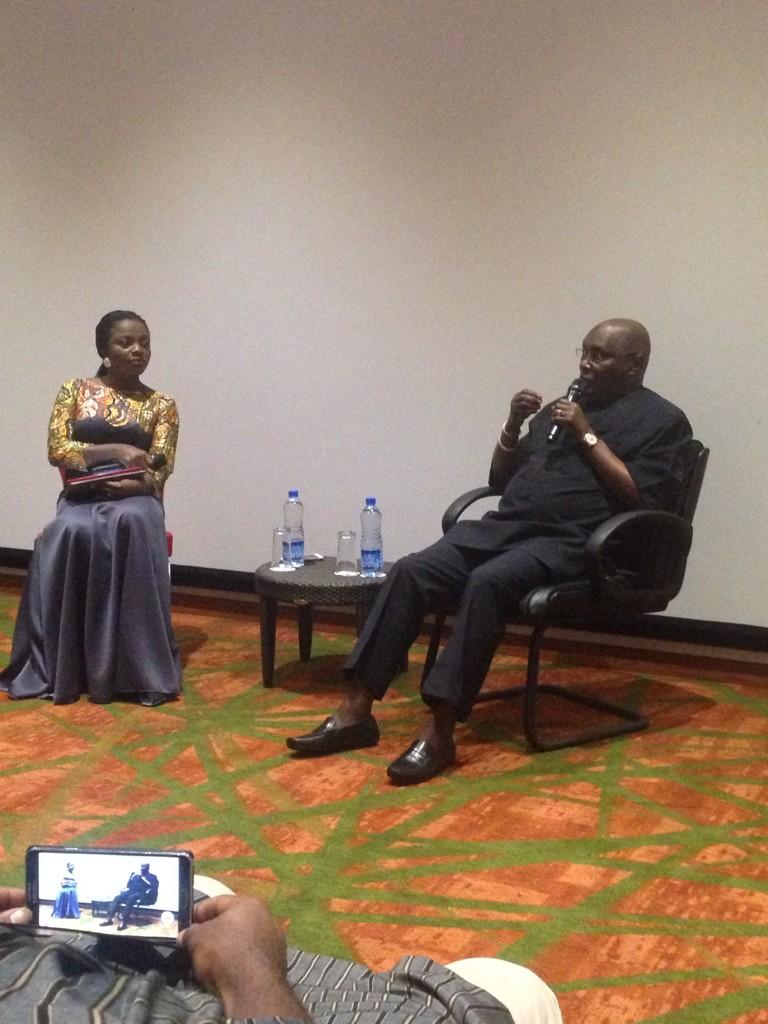 Former Vice President of Nigeria, Atiku Abubakar, has announced that he will launch his bid for the presidency on Wednesday, September 24. Speaking at a gathering of young people tagged #MeetAtiku, the former Vice President talked about his intentions if he got elected as president.

NewsRescue– Two days after VP Atiku Abubakar told Reuters reporters that he will arm and incorporate the Civilian-JTF as the necessary means of checkingt he Boko haram menace, the Jonathan government finally adopted the tactic that has been hammered and pleaded for by citizens and activists for months.

He also spoke briefly about his tenure as the vice president during the Obasanjo administration. According to him, he couldn’t do much as a VP because, “essentially, the vice president is only as relevant as his boss wants him. In the last four years of my vice presidency, my boss exposed me.

“Most of the decisions on privatisation reversed by Yar’Adua were those taken outside the National Council on Privatisation. I made sure that all decisions taken by the NCP followed due process.”

Speaking on the 2015 elections, Atiku said; “I don’t believe that the north will vote PDP. Simply because PDP has failed everyone in this country.

When asked about the Boko Haram insurgency, Atiku said, “The reasons given for Boko Haram are not enough for people to take up arms and start killing each other. When I was in office, a similar situation arose in Yobe, and we made the mistake of not going back to find out why, when we crushed it, we simply moved on. I’d incorporate the Civilian JTF into the Army because they have on the ground knowledge and will crush the insurgency faster. I’ll also make sure the army is properly trained and catered for. We’ve also not followed up in intelligence sharing with our neighbours.”

He was then asked about young people, and the role of youth in a prospective Atiku government. “If elected President, 50 per cent of my cabinet will be made up of young people. I will strengthen institutions and make sure that the judiciary ensures prosecutions are seen to their logical conclusion.”

“I will support whoever the All Progressives Congress (APC) picks as presidential candidate for the 2015 general elections. I only need to sit down with the governors for three months, and we will come to an agreement on true federalism. I will support any Constitutional amendment that will devolve more powers to the states. We need true fiscal federalism, he said when asked about his party hopping and what would happen if he failed to get the APC candidacy.

On his rise to riches and what he wold focus on if he came to office; “My first enterprise was the transportation business, in my second year as a public servant at Idi-Roko border station. I took four pick-ups on higher purchase and got defrauded by my manager. But I still took the risk and persevered. However, conditions need to be improved to start up small businesses, such as tax rebates and access to credit.

“I want to give back. I was paid to go to school, so I have an urge to give back until I can give no more. I am driven by passion.

“Agriculture is the most important thing in Nigeria. We need to refocus on agriculture. We also need to stimulate our industry to create more jobs.

“The wealth of a country is its population, but the population needs to be trained and skilled. We need to devolve agriculture, education and health to the states. Let the FG provide the regulatory framework to monitor these things, that’s all.”

The aspiring presidential candidate said that his private businesses had created nothing less than 50,000 jobs for Nigerians since the mid-80s up until now.

He stressed that there was not thought of him leaving the APC, as there is no better party in the country.

“APC for me is a bus stop. I’m not leaving for any other party.”

Responding to his frequent use of social media, the APC chieftain said he takes social media serious as it brings him closer to the masses.

“I handle my Twitter account myself sometimes my media team is surprised at how early I wake them up in order to respond to some pressing issues,” he said.