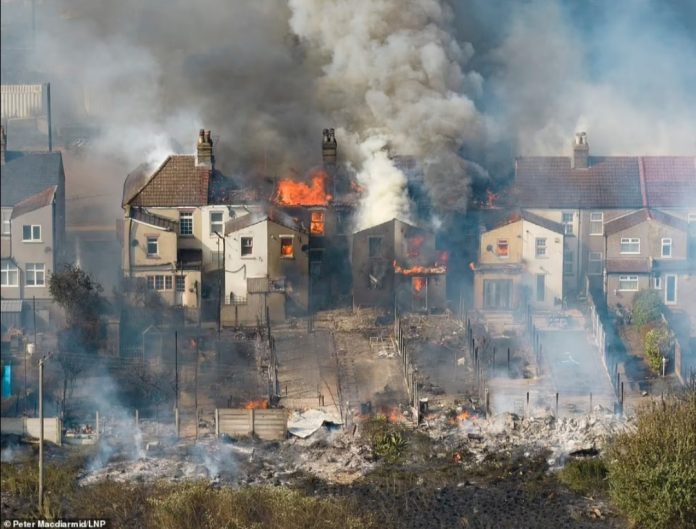 A massive Fire has burned through an east London village of Wennington, destroying at least 5 homes and leaving many families distraught.

This is coming as the temperature rose to an alarming 40C(104F) for the first time in the UK.

London Fire Brigade has declared a ‘major incident’ in response to a huge surge in fires across the capital today as it came under ‘immense pressure’, with 15 fire engines and 100 firefighters dealing with the ongoing Wennington blaze alone.

fire is believed to have started in grassland before spreading to nearby buildings close to a fire station, with crews called into action around 1pm. Aerial footage has shown smoke covering the village while nearby grassland and outbuildings continue to burn. As reported by our Source daily mail.

As expected, the London police and fire fighters are all hands on deck as required safety measures are applied including cordoning off the area, however, they are being forced to extend the danger zone as the fire burns out of control and the danger zone spreads.

A representative for the London Fire Brigade said: ‘A row of terraced houses and an area of scrubland are involved in the blaze.

‘The Brigade was called at 1.06pm. Fire crews from Dagenham, Deptford, Bethnal Green, Woodford, Lee Green, Forest Hill and surrounding fire stations are at the scene.

‘The cause of the fire is not known at this stage.’