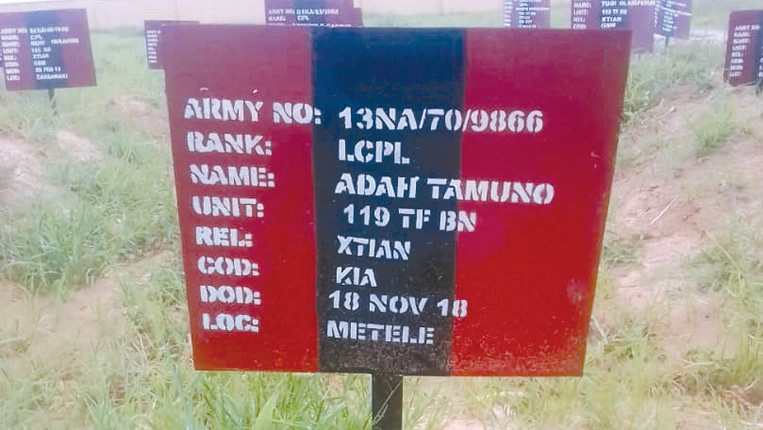 Following a shocking exposé by the US-based Wall Street Journal, the Nigerian army released to the public, images of some tombs of Nigerian gallant soldiers buried hastily in secret without national honor. Purported unmarked and mass graves were not shown.

The Wall Street Journal had said in its July 31st article,

“After dark, the bodies of soldiers are covertly transported from a mortuary that at times gets so crowded the corpses are delivered by truck, according to Nigerian soldiers, diplomats and a senior government official. The bodies are laid by flashlight into trenches dug by infantrymen or local villagers paid a few dollars per shift.”

‘“Several of my comrades were buried in unmarked graves at night,” said a soldier from the Maimalari barracks, where more than 1,000 soldiers are based. “They are dying and being deleted from history.”’

Following the report, the Nigerian army finally on August 3rd in Press release revealed to the public a few images of some of the secretly buried soldiers.

As revealed in the article, many soldiers are buried secretly with at most their families invited. The practice of secret mass burials is believed to be a political play by the Buhari administration to promote a political campaign image of having defeated Boko Haram.

Nigeria’s president as early as his first year touted himself to have defeated Boko Haram. Following this the media and public were banned from the Northeast war front and deaths of civilians and soldiers were tightly guarded and never made public, and when made public, underreported.

Nigerians had protested the secret mass burials over the years with the Bring Back Our Girls movement in August of last year, making a vocal call for an end to the secret and dishonorable mass burial of Nigerian soldiers, See article from August 1st, 2019: “Boko Haram: Stop Secret Burial of Fallen Soldiers, BBOG Tells Nigerian Govt“

In 2015, reports by The International Centre for Investigative Reporting claimed that, contrary to claims by the military authorities, scores of Nigerian soldiers were killed by Boko Haram insurgents in Gudumbali in Borno State on Wednesday, November 18, 2015.

Using a video clip recovered of the aftermath of the Gudumbali attack, the ICIR reported that only 147 of 330 soldiers had been accounted for by the Nigerian Army, with the others either missing, killed or fleeing without re-joining the battalion.

The military, however, denied that any soldier was killed or unaccounted for after the attack, insisting that some of them who initially got missing had re-joined their battalion.

The Director of Army Public Relations at the Defence Headquarters (DHQ) in Abuja, Col. Sani Usman, described the report as a smear campaign against the Nigerian military.

Later, however, a report in ThisDay Newspaper would note that the bodies of the 105 soldiers were quietly buried at the military cemetery in Maiduguri. Read full in the Pulse

Soldiers are not the only Nigerians buried en masse by the current rather brutal Nigerian government.

In December of 2015, after an overhanded military clampdown on the minority Shia Muslim religious sect, the Nigerian government admitted to a secret midnight mass burial of hundreds of Muslim youth.

While the Islamic Movement reported the number as 1000, the Kaduna state government admitted to the barbaric secret mass burial of at least 347 youth, many who were buried alive. See article:

Reports in the media also indicate the secret mass burial of Igbo protesting youth in an Onitsha military cemetery. A report in PREMIUMTIMES exposed this other atrocity: “SPECIAL REPORT: How the Onitsha massacre of pro-Biafra supporters was coordinated — SSS operative“

“A security source, another SSS source and a military police source individually confirmed that a mass burial occurred in the afternoon of Wednesday, June 1 in a military cemetery, near Yahweh Church, inside the Onitsha Military Barracks.”

It is hoped that with the Wall Street Journal article, the deaths of civilian and military Nigerians will be properly reported and they will be buried with honor.

There is yet to be a public investigation into the full details of the burial of Nigeria’s soldiers and locations where other secret unmarked mass graves may exist.

It is hoped that with the Wall Street Journal article, the deaths of civilian and military Nigerians will be properly reported and they will be buried with honor.