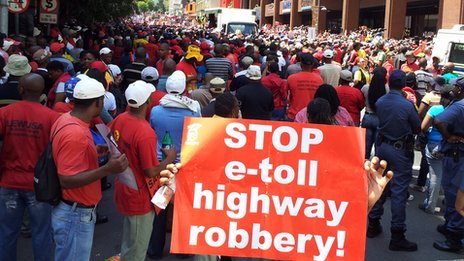 Lots of misguided fools, including many top politicians, traditional rulers and other misguided elements jubilated when President Goodluck Jonathan was dragged by Ex Gov Peter Obi to belatedly commission an auctioned 419 2nd Niger Bridge that will be tolled for 25 years. This president while seeking for Igbo votes in 2010 promised to deliver the bridge before the end of his tenure. Five years later and a year to the expiration of the same tenure, they concocted a PPP arrangement to make the Igbos pay for the bridge through the back door.

I have written an earlier write-up titled ‘Fraudulent Construction of 2nd Niger Bridge: Another 419 on the Igbo Nation’, where I gave a hint that the thieves that concocted the financial criminality on the Igbo nation will recoup their investment within 4 years therewith exorbitant toll fees being planned, and the rest 21 years will be profits-and excess profits at the expense of the all wise Igbos. Since the piece was released, I have received far more facts which show that the N50 billion naira estimated as the inflated cost of the bridge is by far more costly. Under Obasanjo, the bridge was estimated to cost N54 billion naira (without the usual due process) and experts believe that with due process, the estimate would have reduced to N30 billion naira. It cost Yoruba man Fashola N29 billion naira to construct a l.3 km Lekki-Ikoyi suspension Bridge with adjoining roads while the 1.5 km 2nd Niger Bridge and 11 km adjoining roads will cost N117
billion naira. The difference is to be probably shared between some an APGA chieftain , some PDP benefactor and Julius Berger Consortium is just a smokescreen used to divert illicit gains.

It is most likely that the toll fee will be reviewed at least 5 times in 25 years to something above 500% and this will give the thieves revenues and profits in excess of N1 trillion naira in the same 25 years. In addition to this excess rip-off of the all wise Ndigbo, all the extortionist Federal Government agencies whose contempt for the Igbo Nation is phenomenal like the Nigerian Police, Customs, NDLEA, VIO, FRSC and Boko Haram will all have headquarters annexes at this tollgate to extort, intimidate and monitor the movement in and out of the South East – yet some Igbo fools are still jubilating. When the bridge is fully operational the tolling point of convergence and exit will afford the security agencies the opportunity of constituting a monitoring spirit to all the vehicular movements in and out of Igbo land and a telnet of such could be monitored from a personal computer anywhere in Sokoto, Maidugeri or Offa.

The 2nd Niger Bridge will be the only Federal Government owned bridge to be tolled throughout Nigeria. Bridges have been built all over Nigeria running into hundreds of billions of naira. Tolls at Lagos Ikoyi bridge has been stopped by the courts due to resistance from Yoruba nation and Igbos cannot be accepting what their counterparts in the west stoutly resisted. Dams, silos and-roads have been built for the rest of the country at costs beyond N150 billion like the Lagos-Shagamu road at cost of N170 billion Naira yet it is only in Igbo land that a bridge will be built through PPP and some fools are jubilating.

The Lagos Shagamu expressway is to cost 170 billion naira and yet the Yoruba people have not groveled before any Jonathan the way the Igbo over praise the construction of a 419 Niger Brigade.

This bridge was first promised by Obasanjo and some Igbo fools around him failed to task him on his promise despite the fact that the South East voted en-masse for PDP. Later, Ebele Azikiwe followed in the footsteps of Obasanjo and after promising to finish building the bridge before 2015, he just recently woke up in 2014 and kick started the construction of a modern slavery of a bridge.
The problem that puzzles me is why the entire Igbo politicians, intelligentsia and traditional institutions failed to see this 419.

I was part of an Igbo clergy group comprising Archbishops, Bishops, Apostles, Pastors and church leaders with members drawn from all denominations that held several meetings with some representative of Jonathan from February 2010 when he was still Acting President even before the death of Yar adua and we discussed on the projects the Jonathan government will do for Igbos as condition for unalloyed support in 2011 elections. The conditions include a new Niger Bridge, new Seaport, Enugu Airport to be upgraded to international standard, reconstruction of Enugu-Onitsha and Enugu-Port Harcourt Expressway. There was a gentleman’s agreement, and the group was on the verge of signing some agreements with Jonathan’s couriers and kinsmen before an Archbishop suggested that we involve Ohanaeze Ndigbo since nobody will leave his flock to chase Jonathan around to fulfill his promise. I initially opposed this view but then my voice was over ruled by the more
elderly voices.

Since the church leaders involved Ohanaeze in 2010, a proactive demand schedule was reduced to political theatrics and unbridled sycophancy. A presidential aide hijacked both Ohanaeze and the noble demands and reduced the Igbo nation into a fleet of buses and couples of billions of naira under an Ohanaeze Foundation registered as personal business. Ohanaeze, of which I am a stakeholder, is yet to recover from that Foundation used to muzzle their voices. Even the much celebrated Enugu International Airport is another of such 419 on Igbos.

During the colloquium in honor of the demised Ohanaeze Ndigbo President-General, Ambassador Raph Uwechue, at the Ohanaeze National Headquarters in May this year, and as one of the guest speakers at the occasion, in paragraph 15 of my speech I tasked the Igbo leaders on the same PPP bridge thus ” Igbo leaders must ensure that the fraudulent construction of second Niger Bridge which will be tolled for 20 years is stopped forthwith. For our support for Jonathan, we should have a toll free Niger Bridge constructed with Federal Government money, not this private public-private partnershp meant to enslave Ndigbo”

I have personally called as many Igbo leaders as possible on this 419 bridge issue and many including elements in Ohanaeze , APGA, PDP and APC had explained to me that it is difficult to change the PPP model because one Mr Peter Obi and another Ebele Azikiwe seems to have some interests in the multi billion naira 25 year business

This 419 bridge being given to Ndigbo through the back door when even some illiterate NASS members from Nigeria’s North is ensuring that multi billion naira dams, bridges, silos, roads, irrigation projects , fertilizers and recently Almajiri schools is being done in their zones by the Federal Government without any PPP enslavement . No Yoruba or Hausa-Fulani politician will accept such nonsense but Igbo leaders, politicians, businessmen, professionals all foolishly accepted the financial brigandage.

How a great nation that produced the likes of Nnamdi Azikiwe, Odumegwu Ojukwu, Emeka Anyaoku, Pius Okigbo, Emeagwali, Chimamanda, Okonjo Iwuala, Chinua Achebe etc will descend so low to be hood winked by an inflated 419 bridge PPP to be built at N117 billion naira when Governor Fashola of Lagos State built a similar one at N29 billion is still a Guinness Book wonder.

Some Igbo fools have rejoiced over a modern day financial)l brigandage over their future. Foolish Igbo leaders have followed the bandwagon to celebrate a fraudulent bridge. Their friendship with President Jonathan and even all the years the All Progressive Grand Alliance (APGA) sold Igbo privileges to Jonathan cannot attract a toll free bridge. This is nothing but a charm that cannot catch me and my family. Shikena!!

Fools have taken over Igbo land as leaders, representatives, senators, governors, and presidential aides. It is time for all well meaning Igbo, including those in Diasporas to rise and condemn this financial criminality until this Julius Berger PPP enslavement is reversed. If Jonathan cannot give us a toll free bridge despite all our support then let it be. This jubilation of Igbo fools over 419 bridge must stop because an Igbo fooled after 54 years of independence with an auctioned bridge is a fool forever.