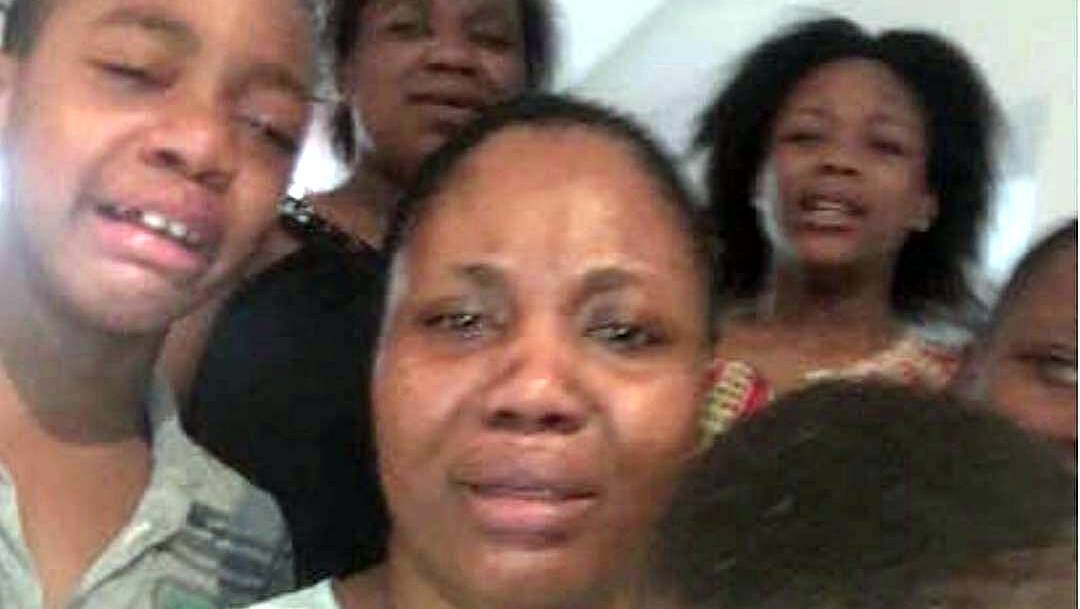 Uchennna Onwuamadike, wife of notorious kidnap kingpin, Chikwudubem Onwuamadike, also known as Evans, has appealed to Nigerian authorities to spare the life of her husband.

Mrs. Onwuamadike’s appeal came after the man was arrested by officials of the Nigerian police penultimate Saturday.

According to the police, Evans had managed to escape arrest for seven years.

He was, however, arrested on June 10, after a police special squad caught up with him at his No. 3, Fred Shoboyede Street, Magodo, Lagos home .

The kidnap kingpin has confessed to being responsible for many high-profile kidnap cases in many states of the country, especially Lagos.

He has also confessed to earning money running into billions of naira from his unlawful activities, having charged some of his victims up to $ 1 million each as ransom.

But according to Vanguard newspaper, the 31-year-old wife of the kidnapper who married him at the age of 17, said she was not aware of her husband’s criminal activities.

Mrs. Onwuamadike, who reportedly spoke from Ghana where she lives with her five children, said, “I was not aware that he was into kidnapping and all the criminal acts he is being associated with now.

“All I know about his business is that he was into haulage, buying engine and spare parts for trucks and imports exhaust pipes. That was what he told me. The reason he kept me in Ghana was because he said our children should get quality education.

“I have spent six years here (Ghana) and after I stopped hearing from him, I called and complained bitterly but he said I should stay for some time,” Vanguard Newspaper quoted her as saying.

Speaking further, the mother of five said her husband had always lived a curious life, stating that she never knew any of his friends.

“While in Lagos,” she said, “I was idle and I pressured him to find something for me to do and he promised to do that.

“Several times, I asked him to take me to his office but he said they move from place to place to offload goods in haulage business and share profits. I can’t remember having any visitor in our house. It is only the agent called Sunny that helped us to pack into our house that I know. At times, artisans come to do one repair or the other, that’s all.

“I don’t know any of his friends and if we were invited to parties, he would not allow us to attend. He told me that he has no friends and that he hates associating with people. I was always indoors because he warned me to beware of Lagos women that they are wayward.

“I was staying indoors and it was only when I was sick that he took me to a hospital in Ikeja. I always have BP and it makes weak.”

According to Mrs. Onwuamadike, the news of Evans’ arrest came to her as a rude shock because she never suspected that her husband was a criminal.

“When I heard all the allegations against him, I called his brother in Ghana, his mother, father and other relations but I could not get them. I then called their last born, a student at Oko Polytechnic but he said he had not spoken with him for long.

“I was confused until I opened Niger news and Vanguard Websites. That was how I got the shocking news about my husband. I collapsed and later called my kids to inform them what I just read about their father.

“Since then, I have not eaten, I am still in shock. Our children could not believe what they were reading about their father. They are saying that he cannot do all the things they said he did. In fact, while we were in Nigeria, he had never slept outside our house. My children were crying when they saw his bloody eyes and swollen face.”

Commenting on the proceeds of Evans’ criminal escapades, the Anambra-born Mrs. Onwuamadike said, “I have not been receiving money from him, I have never seen his money. The only thing I know is that there was a time he bought an expensive watch in Dubai and I wanted to know why he bought it when he could not open any business for me.

“He kept on teasing me, claiming it came from a friend. It was only when we wanted to travel to South Africa last year Christmas where we spent two years that he gave me N200, 000 for the trip.

“I have never seen him as a rich man. While with him, we made sure we had all we wanted to eat and that’s all. I can’t remember seeing any sign of affluence in him.
He is not a proud man and he has been wearing one sandal and slippers for long now. He does not go for parties.

“In fact, I have never suspected him as a criminal. If I have been seeing any strange things, I would have suspected him. We have three cars, one Hilux, one grand Cherokee and an SUV. The N20m they said he sent to me through transfer was given to one Hausa man to pay into an account in Ghana to be used in paying our rent and furnish the house in Ghana. I know he banks with GTB only. Their staff used to visit us in the house.”

On the man’s extramarital affairs, she said, “I am not aware that he has five girlfriends and I have never suspected him because he did not keep late nights. It was shocking to hear about his girlfriends. He did not answer calls in my presence. I used to see his phones being charged but he normally switched them off. I always asked him why use pin code to lock his phones and that he lived a secret life but he threatened to beat me if ever I touched any of his phones.

“I didn’t even know the security pin. He would leave the house sometimes in the evenings with his phones and would come back between 8pm and 9pm. Most of the things I read about him are strange to me. As his wife, I should have seen the signs but I have not. He has cancer and does not drink alcohol nor smoke anything. I have never seen gun in our house. I don’t know where they got those frightening guns. He has never told me he has another house at Igando.

She, however, attributed her husband’s criminal tendencies to a diabolical curse allegedly inflicted on him by his stepmother.

“I am suspecting that whatever happened to him must have come from his father’s second wife. I don’t know what he did to him when he was young but he told the story. He said that after their mother was driven out of the house, he was with his brothers playing outside one day when the second wife called him to pick a bucket and collect water for her,” she said.

“He was four years then, he picked the bucket, collected water and when he came back, she removed her dress and she was wearing only a bag made from animal skin on her waist. She brought seven small stones from the bag, gave to Evans and ordered him to pour the stones into the bucket to know if the gravel would rise (sail) on top of the water or not.

“Evans said he did as she directed but the only thing the woman did was to take the bucket back and ordered him to go back and play with his brothers. He said he told his father later but he said he was telling lies.

“I feel very bad because I did not know if he was doing all these or not. Even if he was into all these, why did he not stop because of me and his children? All the time when we pray, he used to promise God that he would tell Him his story later in life.

“He reads Psalm 23 a lot. Even his phone, he sets alarm for 12 noon to read Psalm 23. He took part in our daily prayers in the morning, evening and night. He used to lead us in prayers. We attend Anglican Church.

She, however, appealed to Nigerian government to forgive Evans, adding that he never knew what he was doing.

“I am ready to come back and testify on his behalf. I will also like to see the Governor of Lagos state and explain the whole thing to him. They said he is rich but I have only N13, 000 in my Diamond bank account. He does not give me money. He told me he will be paying N40, 000 into my account every month but after two months, he stopped, claiming that he was penniless.

“I am appealing to the powers that be to spare his life, as I speak now, I am kneeling down with my children, crying and begging for forgiveness. Have mercy on us.

A video and several pictures purportedly taken by Evans’ wife and her children are being circulated on the internet. In the video and pictures, they were seen crying and begging for mercy on behalf of the kidnap kingpin.

Meanwhile, Nigerians have lashed out at people promoting a controversial hashtag, #FreeEvans, on the cyber space.

The hashtag, which is being promoted towards securing public sympathy for Mr. Onwamadike, began trending online on Friday and has been condemned by many Nigerians.

Similarly, PREMIUM TIMES observed that a dedicated Facebook page is being operated to promote the campaign, with the name ‘Free Evans The Kidnapper And Jail Nigerian Politicians’.

No one has publicly come out to defend the campaign.

But many Nigerians who commented on the campaign are enraged that people could call for the release of a notorious kidnapper, whose unlawful activities, at least on a particular occasion, led to the death of about four persons.

Akpede Junior, a Facebook user, said, in reference to one of the campaigners, “I think (yo)u are not normal, Pray (yo)u don’t get caught with all these evil people or (yo)ur loved ones. (Yo)u won’t be saying this rubbish.”

Another Facebook user, Ferdy Emeka, said, “Rubbish. Evans must pay the price. No campaign can save him.

“Maybe this lady (#freeEvans Campaigner) might be one of her girlfriends and now she’s trying to campaign placing the man’s family pix to attract sympathy but no way,” he added.

An apparently angry Okwudiri Agbo, another Facebook user, simply said,
“Bullshit”, while Mustapha Olansile, a commentator, said, “You must be mad.”

“Nobody is above the law, if Nigeria will be a better country the law should apply to all, he is not the first and will not be the last, a lesson or deterrent must be sent to all involved in crime to desist from it or pay the price,” said Osahon Aikoriogie, another commentator.

“Government should take care of the children,” he added.