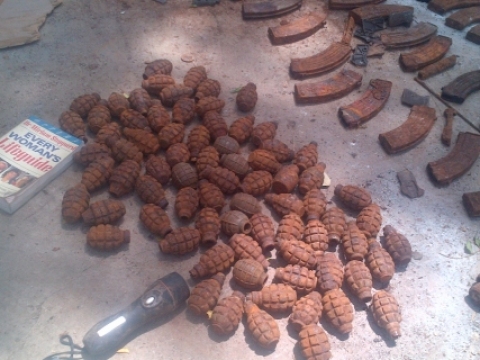 SaharaReporters has learnt that Nigerian military authorities were questioning four foreign nationals suspected to be from a Middle Eastern country over a large consignment of arms and ammunitions intercepted in a warehouse located in the Bompai area of Kano, the Kano State capital.

A security source also told SaharaReporters that the owner of the warehouse, simply identified as a Lebanese national, was also a guest of Nigerian military interrogators over the shock discovery.

As at the time of this report, the building on Gaya Road, Bompai, where the weaponry was found was under heavy military guard.

A spokesman for the anti-terrorist Joint Task Force and member of the 3rd Brigade of the Nigerian Army, Captain Ikedichi Iweha, indicated that the brigade would brief reporters on the issue later today. He declined to make further comments on the incident, which occurred on Tuesday night.

“You will get the details tomorrow (Thursday),” he said. He added, “Because of the Democracy Day celebrations we have decided to talk to you after the break.”

A security source told our correspondent that security was beefed up in the commercial city of Kano as a result of the Democracy Day celebrations. There was a significant increase in vehicular patrols by officers of the JTF and the police. “You can see that our patrols made it possible to achieve the kind of peace that the people of Kano have not experienced in recent months,” a security official said.

Some of Kano’s terror flashpoints attracted the largest presence of soldiers and police. The areas include Kurna Asabe, where two persons were reportedly killed last Friday by unknown gunmen, Hotoro-Mariri, Yankaba and Badawa. The areas are suspected hideouts for gunmen.

In a fresh video message released yesterday by Boko Haram, the militant group’s leader, Abubakar Shekau, threatened more violence targeted at members of the press, the police and the military. In the one-hour video, the sect’s leader also threatened the country’s politicians and members  of their families, accusing them of corruption. Mr. Shekau also denied reports that many of his men had been killed in the recent onslaught carried out by soldiers in the North East States where emergency rule had been declared by President Goodluck Jonathan.

“There is no truth in that claim, it is only a propaganda, in all we have only lost seven members while the Soldiers cannot count the number of their men who were killed in the confrontation” .
He warned that those who have made it their stock in trade to expose the Boko Haram members and their activities to security agents should wait and see what would happen to them.
He accused the Media of dishing out falsehood against the sect especially on casualty figure its members.
In the video also displayed military patrol vehicle purportedly seized by the militants and some captured and dead soldiers.