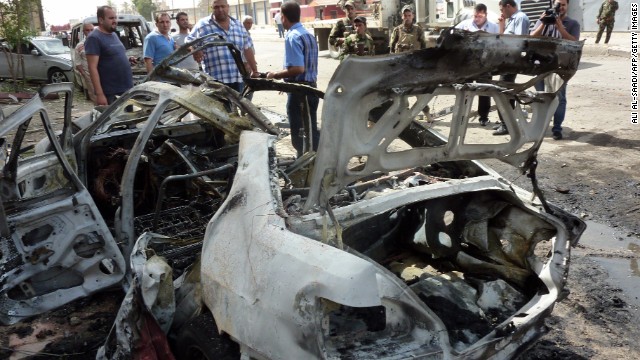 (CNN) — A wave of deadly bombings struck Baghdad on Thursday in an already remarkably lethal week in Iraq, prompting a U.N. official to warn the mayhem is “ready to explode” into a wider conflict.

And violence wasn’t limited to Iraq’s capital — Anbar province’s governor escaped the latest apparent attempt to assassinate him when bombs exploded Thursday near his convoy in Ramadi and injured four of his bodyguards, police said.

The deaths come as political and sectarian violence rises across Iraq, much of it stemming from discord between Sunni and Shiite Muslims. Nearly 400 people have been killed in acts of violence in May, according to a CNN tally.

And since Monday alone, at least 120 people have been killed.

Martin Kobler, the U.N. special representative to Iraq, expressed dismay at the recent violence and condemned the attack against the Anbar governor. Read more…

NewsRescue Editors note- The arming of Syrian rebels who are known to be terrorists and the set up of a Salafist Sunni extremist terrorist force to topple Syria’s Al Assad regime has resulted in predicted widespread destabilizing events in the larger middle east. Bombs and terrorist training being given to these Syrian terrorist fighters are being sent to Iraq and Lebanon to murder all percieved opponents to these extremists in those nations.