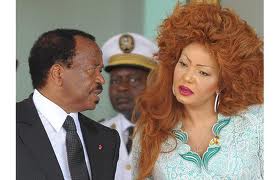 Freedom House Index 2013 : Cameroon is not Free
With a score of 6, it ranks amongst the top most repressive regimes in
Africa. The worst score on the index is 7, and those in this club include;
North Korea, Saudi Arabia, Equatorial Guinea, Somalia, Sudan, Syria,
Turkmenistan,
Uzbekistan.

While the rest of the world was celebrating Press Freedom Day earlier last
month, the regime in Cameroon arrogantly continued with its unjust and
biased media censorship. This time again, it went as far as shutting down
the Foundation Radio station in Bamenda for unjust & baseless reasons. The
U.S. Ambassador for Cameroon Robert Jackson has joined voices to denounce
this absurdity, describing it as an unfortunate situation for a regime
purporting to be on course with its vision 2035.
From the statement below, it is evident the pressure is mounting up on the
regime to remove the seal unjustly placed on the doors of the Foundation
Radio.

*Remarks by U.S. Ambassador Robert P. Jackson*
*British High Commissioner’s Residence, Yaounde*
Your Excellency,
Fellow diplomats and colleagues,
Members of the press,
Representatives of the Government of the Republic of Cameroon,
Ladies and Gentlemen,

First off, I would like to thank the British High Commission for conceiving
the concept of this award and for hosting us this evening. I am pleased
that the U.S. Embassy was able to partner with you on this project and
provide some support.
Second, I would like to thank the Commonwealth Journalists Association, the
judges, and everyone else who helped implement the project. To become
involved in an effort like this suggests to me that you love this country
and have a specific vision for its development. I join you in that vision
and I share your optimism.

Despite occasional suggestions that there is something disloyal or
unpatriotic about being vocal, critical, or contrary — we know
differently. The mark of a citizen is civic engagement. It is his or her
willingness to *speak out* and *stand up*; to care passionately and to have
the courage to swim against the current when necessary. Doing so is
nothing less than an expression of patriotism.

Third, I would like to congratulate all the journalists who competed for
the award, especially the winners. For those who won, I applaud your fine
work. For those who did not, I encourage you to carry on your noble work.
Sometimes the greatest heroes in our society are those who quietly
persevere, even when unrecognized, unrewarded, or un-thanked. Therefore,
members of the press — in this room and throughout the country — I
recognize and thank you.

Ladies and Gentlemen, friends, what we are doing here this evening goes far
beyond the confines of a writing competition. We are chronicling our
respect for freedom of speech and expression. We are also acknowledging
the importance of diversity itself. Because there can be no diversity in
society without the freedom to express it.
I am pleased to have with me this evening our Deputy Assistant Secretary of
State for African Affairs, Cynthia Akuetteh, so that she can witness some
of the exciting things that are taking place here — as well as the
initiatives of people like you. I believe that freedom of expression has
come a long way in Cameroon and the country has made significant strides
over the years.

Undoubtedly, there is much still to be done, but I believe the country is
on track. Progress does not happen on its own, however, and it will take a
continual and consistent effort to stay the course. For example, several
weeks ago a radio station in Bamenda was censored and shut down. I
consider such actions to be unhelpful and inconsistent with international
standards, as well as incompatible with the government’s own Vision 2035
plan of economic and social transformation. Fortunately, incidents like
this one appear to be more and more the exception than the norm.

Permit me to share a few thoughts about the value of a free and
professional media in a country’s democratization. In functioning
democracies, voters hold their leaders accountable. However, for voters to
exercise effective oversight, they must have access to accurate
information. The public relies upon you not only to *convey* the news but
to *identify* it. You help shape opinions about what is newsworthy, about
what events are significant.
Furthermore, it rests upon investigative journalists to discover the truth
as well as to identify lapses in truth. This underscores the significance
of the role you play and the importance of playing that role responsibly.
In your positions of great*er* influence, you must demonstrate
great*er*integrity. You must rise above the fracas of the street,
above the banter
of gossip, conspiracy theory, and sensationalism. You must be shrewd,
thoughtful, well-reasoned, and impartial. Your devotion to truth should
supersede any political allegiance or personal bias.

If public servants err or take a misstep, we face not only legal
consequences but public scrutiny. We all know that even if our employer
fails to identify a wrong, investigative journalists like you might. I am
not just talking about theoretical concepts. I am talking about historical
realities with practical relevance, such as Edward Murrow’s 1960
investigation of the McCarthy anti-communist hearings; Bob Woodward and
Carl Bernstein’s reporting on the Watergate scandal; and Seymour Hersh’s
2004 article on torture at the Abu Ghraib prison. However embarrassing and
difficult these reports were at the time, they led to change and reform.

In closing, allow me to once more congratulate you for the work you do, day
in and day out. I share your vision of the greatness of this country and
its potential to excel. May you succeed in your important work; may you
have the space to do so independently and may you have the wisdom to do so
responsibly. If Cameroon is indeed a great “construction site,” as
characterized by President Biya, the structures to be built are not simply
dams, bridges, and roads. They are institutions, mindsets, norms, and new
realities. And you are among the key builders.
Thank you.

We know through painful experience that freedom is never voluntarily given
by the oppressor; it must be demanded by the oppressed (Martin Luther King
Jr. Letter from a Birmingham City Jail 1963 )

—
————
“‘The person who says it cannot be done should not interrupt the person
doing it.” Chinese Proverb