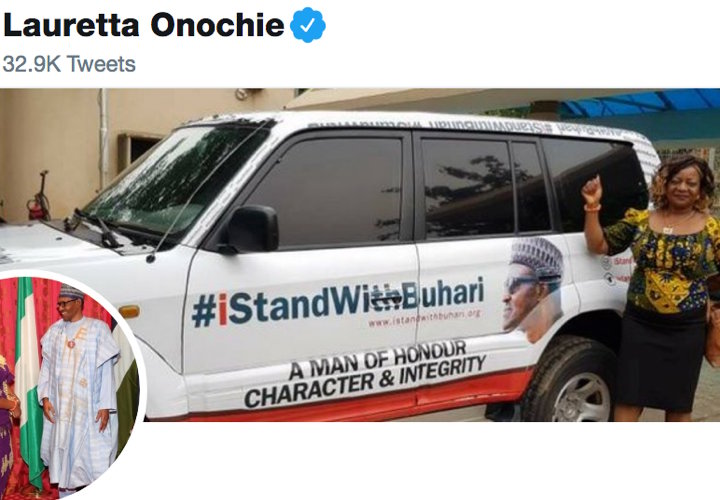 President Muhamamdu Buhari’s social media aide, Lauretta Onochie appears to have invented a fabulous Fake News story about a Nigerian kidnapper involved in the kidnap of 3 girls in Ghana.

The kidnapper, Sam Udoetuk Wills was behind the BringBackOurTaadiGirls hashtag in January this year. He is also notorious for breaking out of prison. However no part of the accounts online present Samuel as pretending to be Fulani from Jos as Lauretta Onochie suspiciously peddled on her official social media handle today.

After a thorough search the only article from Ghana we pulled up with the term “Fulani” in it and Samuel Udoetok’s name was actually an article from May 3rd this year, about a real Fulani kidnapper named Iddrisu Abubakar who was caught while allegedly attempting to smuggle a 14 year old girl victim to Nigeria for a forced marriage. Read:

Police in the Eastern Region have arrested a man who was forcefully transporting a 14-year-old teenager to Nigeria for marriage.

The suspect, Iddrisu Abubakar together with the victim were on a motorcycle heading towards the pontoon landing site at Agordeke to cross the Volta Lake to Kpando when the Police apprehended them.

The police arrested them following the continuous sobbing and crying of the suspect.

“Donkorkrom Police have arrested a Fulani man, one Abubakari Iddrisu with a teenage girl aged about 14. She was being taken against her will to the Agbodeke pontoon to be sent to Kpando. The Police saw the lady crying. When the Police questioned the suspect, he alleged he was sending the victim who is his daughter to the grandmother in Nigeria.”

“The Police were not satisfied so we probed further…When the girl was questioned she told us that the father was taking her to Nigeria to marry someone who was her farthers age. We are cautioning the public to desist from this. It is against the laws of Ghana. We want to also caution people to be on the lookout.”

This incident comes in the wake of recent kidnappings in the country.

The families of three girls who went missing in Takoradi months ago are demanding urgency from the CID in their search for the girls but officials have asked the families to remain steadfast as they continue investigations.

The girls, Ruth Quayson, Priscilla Blessing Bentum and Priscilla Koranchie are believed to have been kidnapped between August 2018 and January 2019.

The main suspect in the kidnapping, Sam Udoetuk Wills who was re-arrested after he escaped from cell has been jailed eighteen months.

Over the period, residents in the metropolis have voiced concerns over the pace of the investigations.

Some groups have held protests and also petitioned the President and the Sekondi Regional Coordinating Council over the case.

We would like Ms Lauretta to furnish us with where she got her story from.