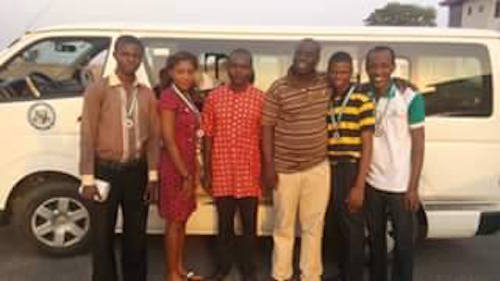 They came first from a pool of twenty-four competing Universities with 96 students which earned them a place in the international competition The FUTA Team from its department of mathematics comprised Michael Omolaja, a 500 level student who clinched a gold medal and the title of Best Student Mathematician across Nigerian Universities, Mary Akinade and Segun Ofe, both 500 level students who won silver medals and Desmond Dike, a 300 level student who picked a bronze medal. Dr. Babatope Omolofe and Mr. Ayodeji Afolabi, lecturers in the Department supervised the team.

The International Competition would consist of two sessions of five hours each with problems from the field of Algebra, Real and Complex Analysis, Geometry and Combinatorics with about 80 countries participating.

NAMCUS, which is an annual event initiated by the National Mathematical Centre (NMC), Abuja to prepare Nigerian students for the annual International Mathematics Competition for students of higher institutions across the country. The 2016 edition consisted of two papers of six questions drawn from a pool on Abstracts, Algebra, Real Analysis, Complex Analysis, Functional Analysis and Differential Equations with forty-eight students emerging as medal winners.

Dr Babatope Omolofe, one of the team leaders particularly expressed gratitude to God for the placement of the team. He said the team owed it to God as he saw total commitment to God as their winning ticket. Mr. Ayodeji Afolabi, the other team leader added that the team’s victory showed the stuff FUTA is made off and increases the University’s ranking among its peers. He was hopeful that the team would return with medals from the international competition as he opined that the team has what it takes to hold its own on the global platform.

Disclosing the secret to success, Michael Omolaja, the gold medalist said the team depended on God and worked together to distinguish itself. Omolaja who has a record of tutoring students at Masters and PhD levels is a Fluid Numerical and Complex Analysis major in the making with a Cumulative Grade Point Average (CGPA) of 4.69 and several published journal papers to his credit. Mary Akinade, the female on the team and one of the silver medalists explained that Mathematics is not as difficult as people think. She emphasized that the successful study of Mathematics only demands interest, support, persistent practice and confidence. She has a CGPA of 4.68. According to Segun Ofe who is a second time participant (2015) and the second silver medalist, “it is a privilege to represent Nigeria and we are going to put in our best to make the most of the privilege”. His CGPA is 4.59.The bronze medalist, Desmond Dike who has CGPA of 4.68 said the team selection was a good compliment and that he particularly learnt from team mates in order to give his best.

The Vice Chancellor, Professor Adebiyi Daramola while congratulating the team assured the members of total support as they prepare to fly the flag of FUTA and Nigeria in Bulgaria. He described their feat as a big boost to the University image and another testimony to its excellence in academic matters.