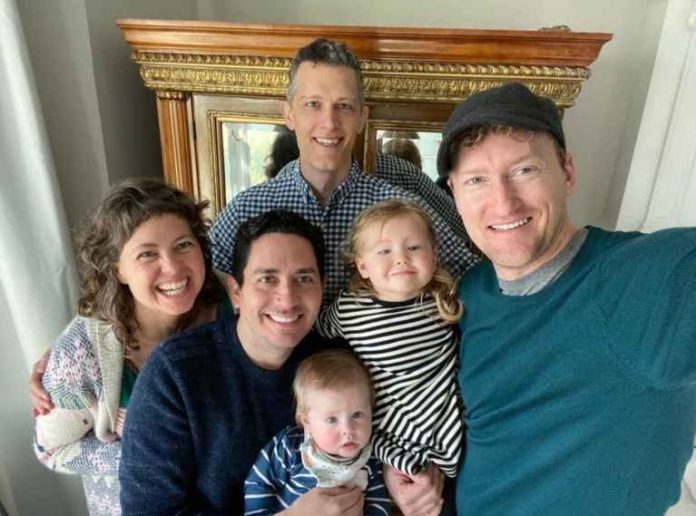 Three gay men discuss polyamorous parenting and their historic achievement of having all three fathers’ names on their children’s birth certificates.

Ian Jenkins, a San Diego doctor, and his seventeen-year partner, Alan, began dating Jeremy, a zookeeper, eight years ago, according to Jenkins.

Jenkins stated that Jeremy’s job, which involves caring for “extremely fragile bird species,” put him and Alan “more in the mindset of being parents.”

That opportunity came almost four years ago, when friends offered to donate embryos from their IVF attempts to start a family. Piper, the couple’s first child, was born through surrogacy in 2017.

Jenkins stated that the men were then confronted with the issue of Piper’s birth certificate, with a judge at a surrogacy hearing telling them that they would “have to have a law passed or appeal” because she couldn’t set the precedent of including all three fathers’ names on the certificate.

“I was like, ‘I just want a kid — I don’t want a legal fight,'” Jenkins explained. “It was like someone threw ice water on us.”

Alan, on the other hand, went “full mama bear,” “basically interrupting the proceedings and telling them to swear us all in.”

Jenkins explained, “We all gave very tearful testimonies about why we needed to become parents.” “You could see the judge’s emotion on his face.” She considered all of her options and came up with a way to use existing laws to provide us with the first birth certificate of its kind anywhere.”

Piper was the first known child born with three fathers on her birth certificate as a result of the hearing, which occurred prior to her birth. The process was repeated a year later with their second child, Parker.

Jenkins stated that the fathers’ family dynamic has led them to believe that “our kids might be perceived differently.” We didn’t want them to be the target of teasing, bullying, or cyberbullying.”

He attributed the dads’ “zero pushback from anyone in our professional and personal lives” to living in progressive California.

“Now that our oldest is in preschool, the other parents and kids are like, ‘Cool! “Tell us about it,” Jenkins said.

He claims that, contrary to popular belief, his family is not unlike many others: “We’re just three tame, regular people who spend a lot of time talking about what to have for dinner.” People realize that after only a few minutes of meeting us.”

“When our oldest develops the ability to tantrum like a Chernobyl reactor breaking down, we all have to be on the same page and have a consistent parenting style,” he said. “What is the best strategy?” How long should a time out last? What is it called? Is the parent in need of assistance, or is this just adding fuel to the fire?”

Jenkins hopes to broaden people’s perceptions of what a family can be by speaking out about their family, including writing the upcoming book Three Dads and a Baby.

“I’m really concerned about someone who lives in a place that isn’t as accepting as California and wants to live this kind of life but is unable to do so,” he said. “I’m hoping this gets the ball rolling so that families can come in a variety of configurations.”