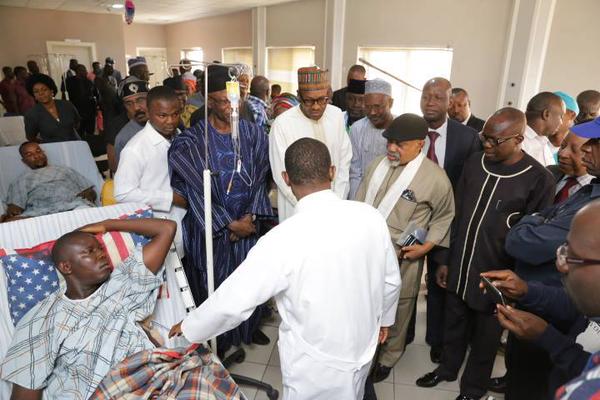 The All Progressives Congress presidential candidate, Maj. Gen. Muhammadu Buhari (retd.), has paid a visit to victims of yesterday’s gunshot who were ambushed on their way to the Adokiye Amasiemaka Stadium in Omagwa, Ikwerre Local Government Area, to attend the inaugural presidential campaign of General Buhari.

Rivers state Commissioner of Information and Communications, Mrs Ibim Semenitari, has condemned the attacked and cautioned the PDP against shedding the blood of Rivers people.

In her statement, Mrs. Semenitari slammed the PDP for “resorting to bloodshed and terror against Rivers people, the same people its governorship candidate had been telling he would give a “new” life.

“Was it not their leader, President Goodluck Jonathan, who said that no blood of any Nigerian was worth his ambition? Or, are Rivers people animals which blood should be shed? Why this resort to barbarism and politics of hate”? she asked.

Mrs. Semenitari challenged the PDP to, rather than resort to violence and bestial acts, “honourably pull out of the 2015 General elections, or, re-build its culture to what is sane and democratically acceptable”.