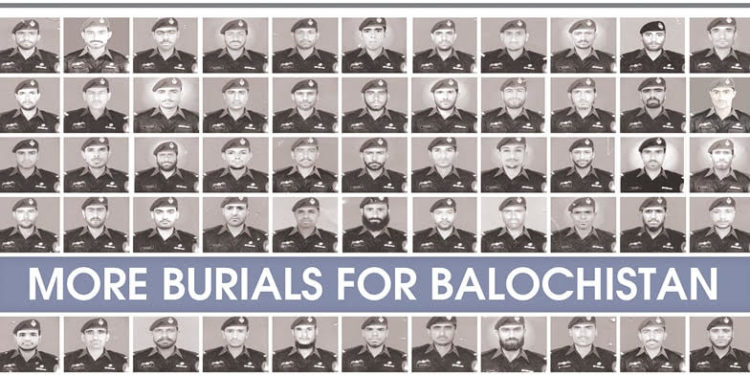 More than 60 cadets were killed in 2016 attack on Quetta police academy / Credit: Dawn

Twin attacks earlier this week on Pakistani security forces in the troubled province of Balochistan cast a light on a sustained and violent campaign against police and paramilitary units as well as Shiite and Christian minorities.

The attacks by groups, some of which have had links to Pakistan’s powerful military and intelligence apparatus as well as Saudi Arabia, spotlight the Pakistani state’s inability to implement a coherent security policy that makes a clean break with the employ of militants as proxies.

They also raise questions about security in a part of Pakistan that is core to the development of the China Pakistan Economic Corridor (CPEC), a China-funded, $50 billion plus infrastructure and energy programme that constitutes a crown jewel in the People’s Republic’s Belt and Road initiative and its single largest project.

Finally, the attacks in which Lashkar-e-Jhangvi, an outlawed, supremacist, anti-Shiite Sunni Muslim group, figures prominently, raises the spectre of Pakistani militants playing a role in potential future attempts to destabilize Iran by stirring unrest among its ethnic minorities, including the Baloch in the Iranian province of Sistan and Baluchistan that borders on Pakistani Balochistan.

Six policemen and paramilitary soldiers were killed and 15 others wounded in the attacks earlier this week in the Balochistan capital of Quetta executed by three suicide bombers.

Militants in Balochistan earlier this month killed six members of Pakistan’s tiny Christian minority community, four of them from the same family, and two people from its Shi’ite Muslim minority. In December two suicide bombers stormed a packed church, killing at least 10 people and wounding up to 56.

No one has claimed responsibility for this week’s attacks, the latest in a wave of assaults on security force targets since 2012 that have included tit-for-tat killings of scores of policemen and operatives of Lashkar-e- Jhangvi that in recent years has forged ties with the Islamic State as well as Tehrik-e Taliban Pakistan (TTP), the Pakistani Taliban, groups that have been targeted by the Pakistani military.

Nevertheless, doubts remain about the severity of the crackdown on Lashkar-e-Jhangvi, an offshoot of Sipah-e-Sahaba, an anti-Shiite group with a history of chequered Pakistani and Saudi backing that like Lashkar-e-Jhangvi, has been banned, but continues to operate under different names.

In interviews, Sipah-e-Sabaha leaders said Pakistani military and intelligence had advised them in 2016 to tone down their inflammatory anti-Shiite language but maintain their basic policy.

The group’s leader, Ahmad Ludhyvani, a meticulously dressed Muslim scholar whose bank accounts have been blocked by Pakistani authorities, told reporters summoned two years ago to his headquarters in the city of Jhang that was protected by Pakistani security forces, that Sipah as well as Saudi Arabia opposed Shiite Muslim proselytization.

“Some things are natural. It’s like when two Pakistanis meet abroad or someone from Jhang meets another person from Jhang in Karachi. It’s natural to be closest to the people with whom we have similarities… We are the biggest anti-Shiite movement in Pakistan. We don’t see Saudi Arabia interfering in Pakistan,” Ludhyvani said at the time in an interview over a lunch of chicken, vegetables and rice.

Former Balochistan police chief and ex-head of Pakistan’s Federal Investigation Agency Tariq Khosa blames the violence in Balochistan on the state’s use of religious militants as proxies in efforts to crush nationalist insurgents.

“The decision to use Shafiq as a proxy against certain Baloch separatist organisations allowed proscribed sectarian organisations to regroup in and around Quetta,” Mr. Khosa said, referring to Shafiq Mengal, a Lashkar-e-Jhangvi leader.

Maulana Ramzan Mengal, an Islamic scholar, fellow tribesman of Shafiq’s and leader of Sipah-associated groups in Balochistan, has, according to sources close to the militants, been the funnel for large sums of Saudi money flowing into ultra-conservative madrassas in the province in the past two years.

Mr. Khosa said the government’s policy was abetted by divvying up responsibility for security in Balochistan between the police and the Balochistan Levies, a force recruited from local tribesmen in each district. The two forces as well as the military’s Frontier Corps (FC) maintain separate lines of command and have no mechanism to share intelligence.

Unlike the police, which is bound by Pakistani law, the Levies, moreover, operate according to tribal laws and practices that protect militants from arrest and/or prosecution.

The ambiguity of government policy and security arrangements in Balochistan complicates the task of a 15,000 men-strong Pakistani military forcedeployed to protect thousands of Chinese nationals working on energy and infrastructure projects in the province and elsewhere in the country.

Unidentified gunmen earlier this year shot and killed a Chinese shipping company executive in the violence-plagued financial hub of Karachi. AChinese engineer working on an energy project in Rawalpindi vanished and is believed to have been kidnapped while a Chinese couple, both teachers, were last year abducted in Quetta and killed.

The Chinese embassy in Islamabad warned its nationals in December of the threat of imminent attacks on Chinese targets. The embassy advised “Chinese-invested organizations and Chinese citizens to increase security awareness, strengthen internal precautions, reduce trips outside as much as possible, and avoid crowded public spaces.”

While Pakistan has made progress in its so far selective crackdown on militancy, a restoration of the kind of security that will give confidence to foreign investors and squash creeping doubts in China is likely to depend on political reforms that put an end to the country’s perceived distinction between ‘good and bad terrorists.’

“Nobody will come and invest in this climate of fear,” quipped Muhammad Zafar Paracha, director at the Pakistani partner of MoneyGram International during a recent visit to the heavily fortified Baloch port city of Gwadar.

“Without courageous political reform, Pakistani leaders are incentivizing the internationalization of Balochistan and sowing the seeds for a dangerous harvest,” added Pakistan expert Emily Whalen.