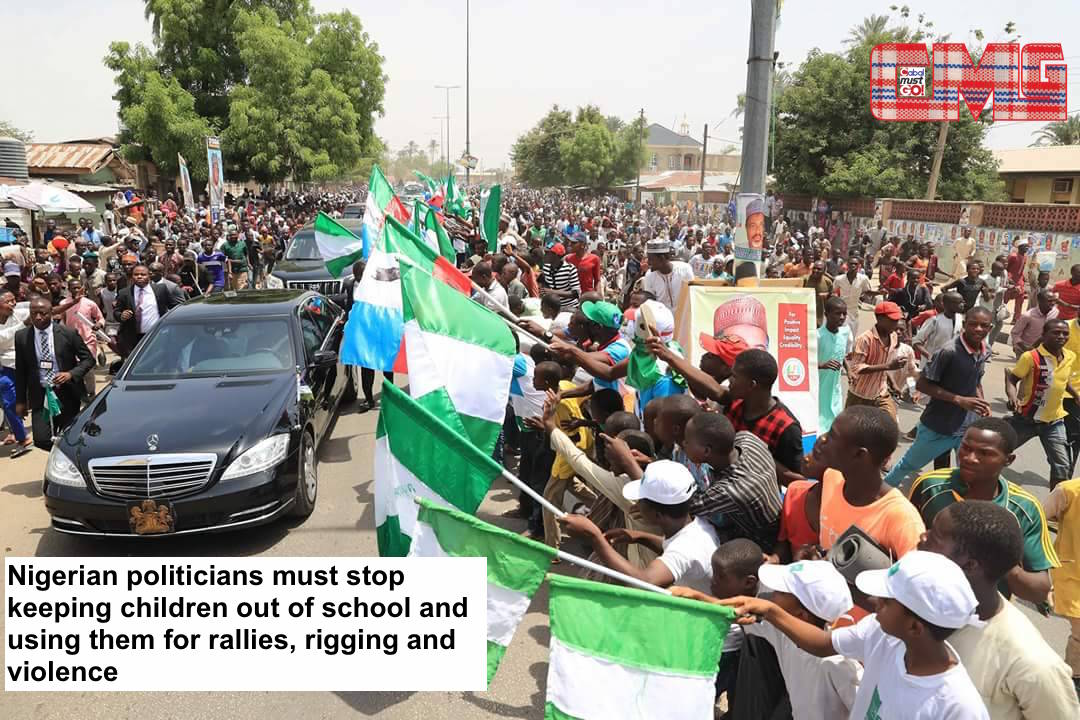 Buhari Presidency official photographer Bayo Omoboriowo inadvertently did an important job Thursday, capturing evidence of the now all too common abuse of Nigeria’s deprived and unfortunate out-of-school and abandoned Almajiri children, being herded for political rallies.

The images released by the Buhari presidency showed these cheated kids, grasping their begging bowls and mats as they lined the streets and gathered together in parts of the stadium “welcoming” Buhari to Bauchi state. 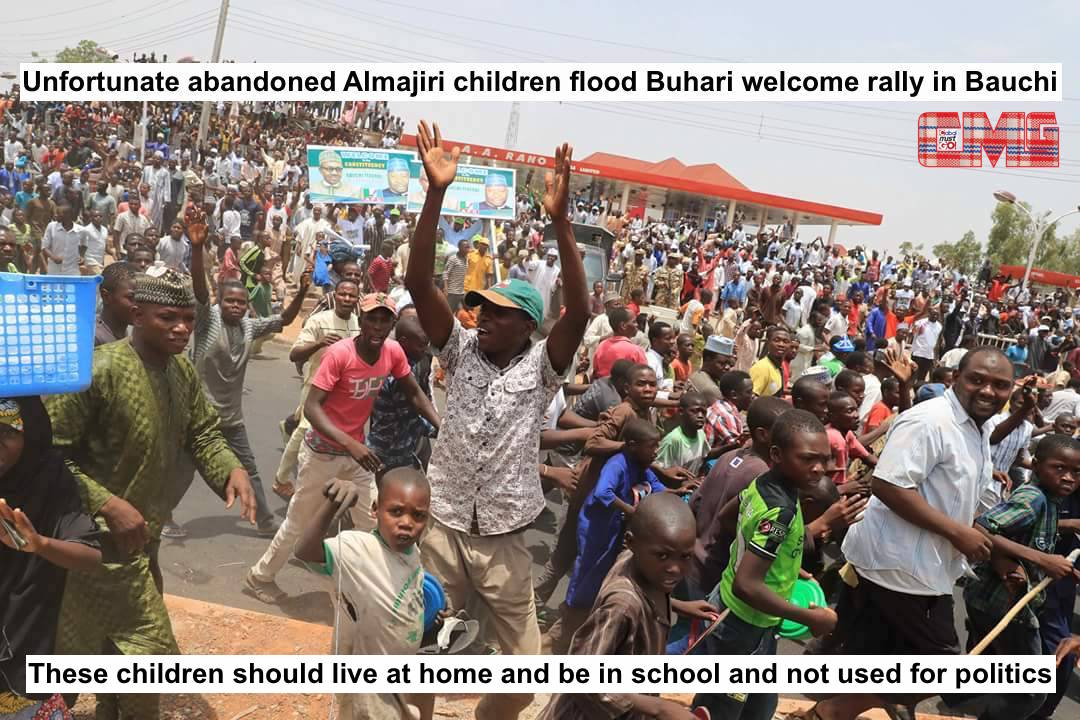 Nigeria has the largest numbers of out-of-school abandoned children in the entire world. Famously called “Almajiri” children, as many as 10 million children have been so abandoned in Nigeria’s north, kicked out of their homes to beg for an Islamic education. This practice condemned by the very Islam which totally detests both begging and child- abandonment, now appears to be intentionally sustained in the north by northern administrators and presidents as a reserve force for political games. Almajiri kids are seen in rallies and have also been spotted flooding electoral voting centers and serve as a pool for violent political protests and mayhem.

It is gathered that at a very cheap price, their Mualims(teachers) are paid to unleash armies of abandoned children from their shacks to flood roads for all uncanny purposes and even to register to vote.

But the situation is even more sinister and has a deadly aspect to it. According to US Cables as revealed by Wikileaks, some of  the most deadly hate riots in the north are sponsored by the same politicians using these for-hire religious institutions. Quoting former Kaduna Governor Makarfi as captured in the Cables https://wikileaks.org/plusd/cables/02ABUJA3344_a.html;

“During a December 11 meeting with International Narcotics and Law Enforcement Deputy Assistant Secretary Steven Schrage and Ambassador Jeter, Kaduna State Governor Ahmed Makarfi discussed the late November violence in Kaduna. Makarfi blamed the riots on pro-sharia Islamic groups and agitators from outside Kaduna. He acknowledged that religious tensions acted as kindling; however, he said the motivations of those who actually lit the fire were “purely political”. Later, in a private conversation with Ambassador Jeter, Makarfi laid much of the blame at the feet of Vice President Atiku and National Security Advisor Aliyu Mohammed ‘Gusau’ . Makarfi said that in their attempts to embarrass President Obasanjo and undermine his popularity the two political heavyweights had unleashed forces they could not control. Finally, while the governor praised the military for its handling of the incident, he had no kind words for the Nigerian National Police (NNP) and other civilian security agencies. Were it not for their inept handling of the situation, said Makarfi, the violence might well have been averted. END SUMMARY. …

“3. (C) Makarfi said the unrest had nothing to do with the many peaceful Muslim processions taking place in Kaduna. The violence began when members of radical Islamic groups collectively known as Izala, incited the crowds to act Emphasizing that the riots were planned, Makarfi noted that there many of those arrested claimed they were paid to attack the “This Day” newspaper office or to burn the governor’s shopping plaza. He also claimed that the evening before the riots began, he had heard reports of people dropping tires in strategic locations around Kaduna so they would be available to be burned the next day. Makarfi was astounded that neither the Nigerian police nor the intelligence service was able to pick up these signs of impending trouble.” Read full in Cable: https://wikileaks.org/plusd/cables/02ABUJA3344_a.html 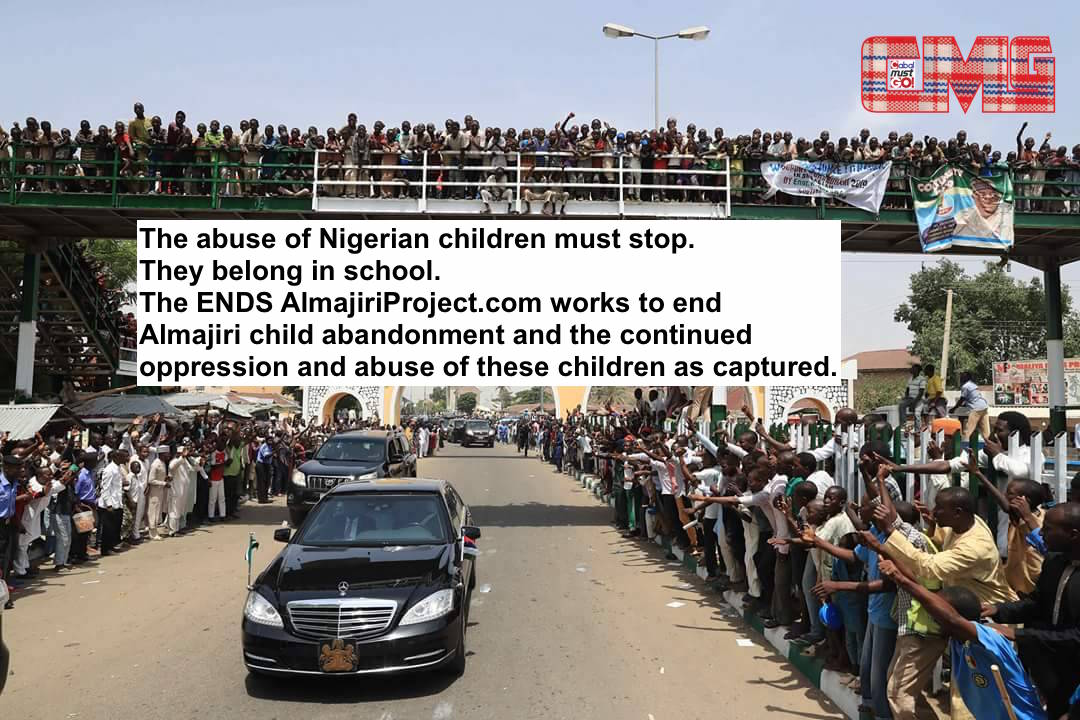 The ENDS Human right organization’s AlmajiriProject.com arm raises serious notices over the continued abandonment of millions of children in Nigeria and their increasing use for political rallies, rigging and violence. Through our many projects we have struggled to raise local and international awareness on the plight of Almajiri children and have advocated the state and federal government ban this inhuman act of child abandonment. However the increasing evidence of the incentive for politicians to keep farms of these children for their political capital is a major concern which we believe all well-meaning Nigerians and the global community should address and condemn.