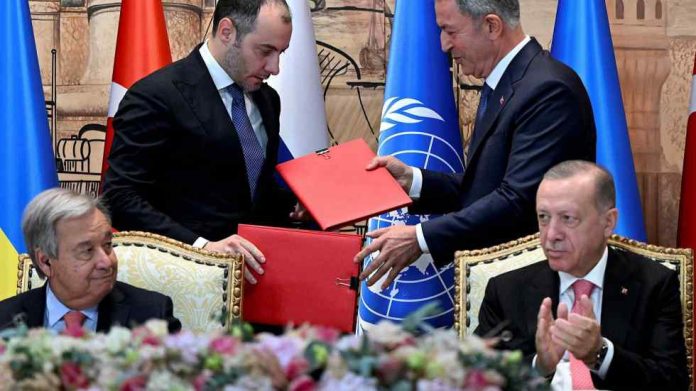 Russia and Ukraine have agreed to resume grain shipments, easing a global crisis that has exposed tens of millions of people, particularly in Africa and the Middle East, to the threat of acute hunger, the United Nations secretary general announced on Friday, July 22.

Prior to Russia’s invasion of Ukraine in late February, the two countries were among the top producers and exporters of grain, cooking oil, and fertilizers in the world. According to the United Nations, Ukraine accounted for 10% of global wheat exports last year. Over 20 million tons of grain have been stuck in Ukraine’s Black Sea ports, causing global shortages and fears of worsening hardship.

Representatives from Russia and Ukraine did not sit together at the Istanbul ceremony, which was presided over by United Nations Secretary General António Guterres and Turkish President Recep Tayyip Erdogan.

“We didn’t get here overnight,” Erdogan, whose government maintains close ties with both Ukraine and Russia, said. He described the talks to reach an agreement as “intense and arduous.”

One of the two agreements signed Friday in Istanbul by the UN and Turkey ensures the safe passage of commercial ships from the Ukrainian port of Odessa and two other ports currently cut off by a Russian naval blockade. According to them, a similar agreement is expected to facilitate Russian grain and fertilizer exports around the world.

According to the official, grain ships will be able to navigate through a safe corridor in the Black Sea before passing through the Bosphorus to reach global markets as part of the agreement.

The ships will be monitored by a Joint Coordination Centre (JCC), which will be established in Istanbul immediately and will include representatives from Ukraine, Russia, Turkey, and the United Nations.

Russian, Ukrainian, Turkish, and UN officials would inspect ships before they arrived in Ukraine to ensure they were not carrying weapons from the West.

Ukraine and Russia have agreed not to attack any ships identified as part of this initiative as they transit through established channels. In the event of an incident, the JCC will step in to resolve any potential issues.

It may take several weeks before vessels begin to move in order for all logistical details of the deal to be properly implemented and inspection teams to be established.

Nonetheless, the process must begin quickly so that Ukraine’s silos can be emptied in time for the new harvest, according to a UN official quoted by Reuters on Friday.

According to Ukrainian Minister Oleksandr Kubrakov, who signed the agreement, the deal is valid for 120 days from the date of signing and can be extended for the same period unless one of the parties declares their intention to terminate it.