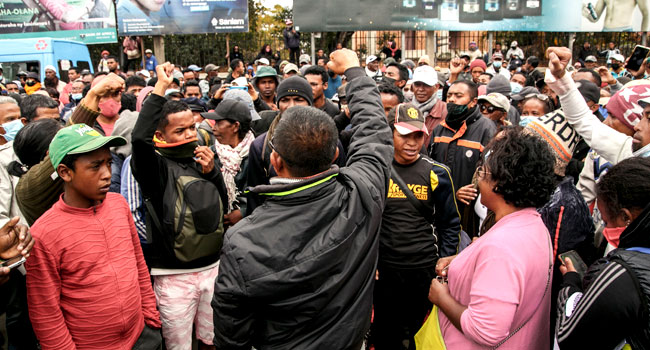 On Saturday, police detained two senior members of Madagascar’s main opposition party during a protest in the capital against rising living costs and economic hardship.

Following tensions between demonstrators and security forces, police said they arrested Rina Randriamasinoro, secretary general of the opposition Tiako I Madagasikara (TIM) party, and its national coordinator Jean-Claude Rakotonirina. They were eventually released.

“They were arrested and detained because they made comments inciting hatred and public unrest,” Antananarivo prefect Angelo Ravelonarivo told AFP.

In many countries, inflation has reached historic highs, fueled by the Ukraine conflict and the relaxation of Covid restrictions.

The rally was supposed to be held inside a warehouse owned by opposition leader Marc Ravalomanana, but when demonstrators arrived, security forces were blocking access to the venue.

Outside the building, protesters staged a sit-in.

Footage circulated on social media of police removing Randriamasinoro and Rakotonirina from the crowd before transporting them in a police vehicle.

“The prefect authorized the rally yesterday, and this morning we discovered the police outside the gate,” said opposition lawmaker Fetra Ralambozafimbololona.

The arrests sparked more protests, with demonstrators vowing not to leave until the two men were released — before dispersing in the afternoon.

Randriamasinoro and Rakotonirina were eventually released early in the evening, according to a police spokesman, who added that authorities had yet to decide whether to charge them.