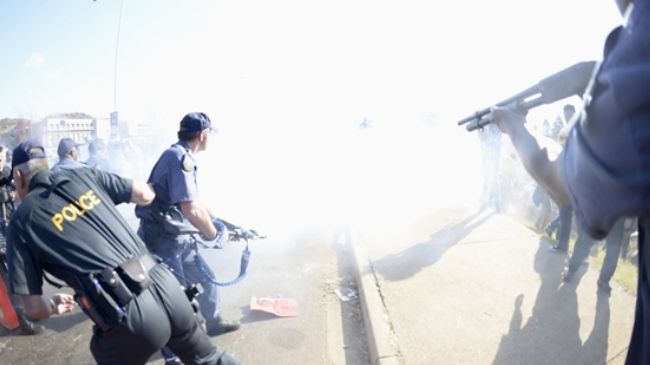 Hundreds of South African protesters chanting “Go back, Obama” have clashed with the police in Johannesburg.

On Saturday, the police fired tear gas and stun grenades at the demonstrators gathered outside of the Soweto campus of the University of Johannesburg, where US President Barack Obama held a town hall meeting with students.

The protesters voiced their disapproval of the US president’s use of CIA-run assassination drone strikes, the prison at Guantanamo Bay, and the US economic blockade of Cuba.

Some protesters held posters that depicted Obama as Adolf Hitler and demanded that the US lift the trade embargo on Cuba.

“Our rejection is based on the USA’s arrogant, selfish and oppressive foreign policies, treatment of workers, and international trade relations that are rooted in warmongering, neoliberal super-exploitation, colonial racism, and the disregard and destruction of the environment, thus making the realization of a just and peaceful world impossible,” the “NO-Bama Coalition” said in a statement issued on Saturday. source