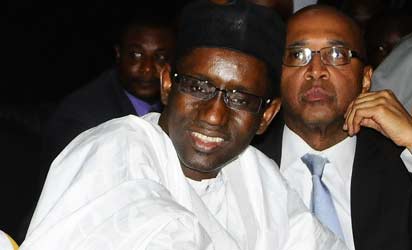 I write this morning with a very heavy heart. This is because one of my political heroes decided to commit what I consider political hara kiri. My sadness also stems from the realisation that Nigeria may be in trouble because those you feel have the moral suasion to drag the country by the force of their characters cesspit we have been taken to, to the Eldorado our politicians always promise to take us to, are turning out to be not better than the worst of the lot. My sadness stems from the fact of knowing that most of us who grandstand on most national issues actually use our grandstanding as a vehicle for personal gain and nothing altruistic.

The defection of Nuhu Ribadu from the All Peoples’ Congress (APC) to the Peoples’ Democratic Party (PDP) came as a very rude awakening to those of us who still believe that it is possible to change the country through the force of our collective characters. What Ribadu did to us is akin to thumping his nose on all those who still believe in him and those like him, but to be fair to him he has only toed a line earlier toed by some of his former colleagues in the Obasanjo administration like Femi Fani-Kayode. Much as one may not like to lump Ribadu in the same political and ideological category with Fani-Kayode, one is forced by Ribadu’s action to do so. This singular act by the former EFCC Chairman gives credence to the conspiracy theorists who went to town in 2011 with the rumour that Ribadu and Shekarau were bribed with huge amounts of money to ensure that Buhari wasn’t the only candidate from the north, thereby ‘dividing’ the northern vote between the three of them. I refused to believe the nonsense then. I am now compelled to reassess my perception of the story now that both Ribadu and Shekarau belong to the PDP.

My personal bellyaching aside, is there anything that Ribadu wants to prove by jumping into the PDP train? Is he in the PDP to spoil the chances of those who have been in the party fighting the course of the party and for the entrenchment of democratic norms in the general polity? Has Ribadu done a’Shekarau’ or is he continuing a project he began in 2011 and might have enjoyed the fruits of that particular misadventure? Much as one may respect the ex-policeman, his latest move has effectively put paid to any claims of perpendicular leadership. We just hope that Ribadu is not going to the PDP as Mu’azu’s battering ram in Adamawa. There is already a long list of eminently qualified aspirants in all the political parties vying to contest the by-election without Ribadu joining the fray and muddying the waters. There is also already so much rancour in our politics and personal relationship without some people trying to pour fuel into the cauldron.

The talk on the streets is that Ribadu has never been averse to lending himself to be used and most often negatively. This, I refused to believe. Proponents of this line will quickly point his role in the production of the “advisory list” during Obasanjo’s disastrous third term campaign. It was a list wich contained all those who stood against the actualisation of the demonic agenda. Next they rehash his presidential aspiration of 2011, which termed as infantile. It was prove-positive to many in the north that Goodluck Jonathan was bent on creating a third front in the north to scuttle any dream of a northern president. And he has now being drafted to come and play the same role in Adamawa. I refuse to believe this.

Though the PDP has its own way of doing things, I just hope for the first time they will get it right for the sake of the long suffering people of Adamawa State. The herd of aspirants from the stable of the party are all imminently qualified to fly the party’s flag in the forthcoming October 11th by-election. If I were to have had a voice in how the affairs of the party are to be conducted, I would have suggested other considerations for the nomination of a candidate besides eligibility and suitability of the candidates. It is conventional wisdom that whenever you have primaries in any of the parties, you are left with the burden of managing rancour, animosity and bitterness. Most times, these acrimonies lasts the live time of an administration or even that of the contestants. Also the malice, mutual suspicion and the distrust generated by Nyako’s impeachment are yet to go with the winds in some quarters. Nyako’s tenure itself midwifed these problems we are trying to overcome. My suggestion to the PDP is simple – without appearing to be autocratic, the party can present the acting governor of the state in the October 11th, 2014 by-elections to contest for the residual tenure of Nyako. This way, the party won’t have to go through two primaries in the spate of two months. Another primaries for the February 2015 general elections will hold in November 2014.

The other gladiators may then go for the mother lode – the February 2015 general elections when you will have the chance of being a governor for four years and not anybody’s residual tenure. The current acting governor will then be advised to excuse himself from the contest, be a statesman and superintend the elections.

All I could wish Ribadu is – GOODLUCK.