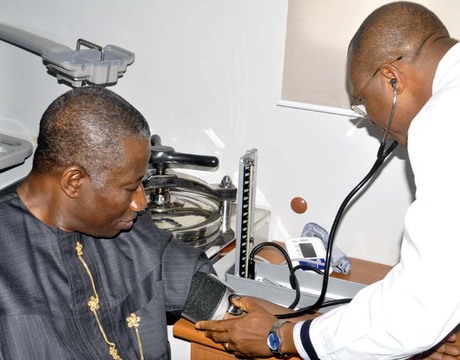 Contrary to official claims that President Goodluck Jonathan travelled to Germany on a private visit, LEADERSHIP authoritatively gathered yesterday that the president actually took ill and left for Germany to seek medical care.

Efforts to get a confirmation from the Presidency failed up until the time of going to press, as several calls to his spokesman, Dr Reuben Abati, did not go through and he didn’t respond to an email enquiry either.

Similarly, the senior special assistant to the president on public affairs, Dr Doyin Okupe, did not pick or return several calls to his mobile number last night.

President Jonathan left for Germany yesterday after performing the closing ceremony of the National Conference on Thursday.

Prior to his departure, presidential spokesman Abati had issued a terse statement saying the president would be making a private visit to Germany as from Friday (yesterday)and would be accompanied by some of his principal aides.

It was gathered that the president, on arrival in Germany, headed for a private hospital for medical check-up.

It could not however be confirmed if he went to the same hospital he had visited with his wife last year when the first lady faced some health challenges.

Before his sudden departure for Germany on Thursday, President Jonathan was billed to host members of the just-concluded National Conference to a dinner at the Presidential Villa, but the programme was cancelled at the dying minute.

Although no official reason was given for the cancellation, it was gathered that the development was connected with the president’s state of health which required urgent attention.

An authoritative source in the Presidency told LEADERSHIP that despite assurances that the president would return soon from his trip, it was not likely as his health situation was not too good. He said there was uneasy calm and anxiety in the Presidential Villa yesterday over the state of health of the president.

Meanwhile, the situation has also elicited concern from prominent Ijaw (President Jonathan’s ethnic group) political leaders, some of whom converged on the home of a prominent elder statesman from the ethnic group in Abuja to deliberate on the matter. A source privy to the meeting hinted that the Ijaw sons were considering sending a delegation to visit the president.

The source said before the meeting ended, it was agreed that clearance would be obtained from the Presidential Villa on whether the president is in a state to receive visitors before it would be decided on who would visit him.

Some people had speculated about Mr Jonathan’s health just before his trip to Washington, DC, United States, where he attended the 2014 US-Africa Summit early this month.

Nigeria’s ambassador to Germany, Abdu Usman Abubakar, has stated that President Goodluck Jonathan, who was abruptly flown to Germany on Thursday, was doing well.

SaharaReporters had disclosed that Mr. Jonathan was flown to see his doctors in Wiesbaden, Germany a few hours after the Nigerian president rounded off the national confab in Abuja.

Mr. Jonathan’s sudden departure from Nigeria’s capital city and the cancellation of a scheduled dinner with members of the confab triggered panic and alarm amongst presidential aides and the Nigerian political class.

Mr. Abubakar also asserted that the Nigerian president was staying in a hotel and not in a medical ward at a hospital. According to the Nigerian diplomat, President Jonathan was eager to go back to work, but might observe a few more days of rest after watching the Falconets play in the women’s World Cup finals tomorrow. Saharareporters recalls during the dying days of late President Umaru Yar’adua his voice was faked to wish Nigeria soccer players well during a qualifying match in Agola in January 2010.

Despite the ambassador’s assurances about Mr. Jonathan’s robust health, a source at the Presidency claimed that the president was flown out of Nigeria for reasons related to ill health. The source said, however, that he was not sure whether the president was staying in a hospital or was an outpatient, adding that he could not tell if Mr. Jonathan was receiving treatment at the same hospital frequently by former President Umaru Yar’Adua, his immediate predecessor. Mr. Yar’Adua died in May 2010 after months of receiving treatment in Germany and a hospital in Saudi Arabia.

In 2012, President Jonathan’s spouse, Patience Jonathan, spent several weeks in a hospital in Wiesbaden, Germany. She was treated for a series of ailments. After SaharaReporters broke the news of Mrs. Jonathan’s hospitalization, her then spokesman claimed that she had traveled abroad to rest after hosting a meeting of African First Ladies in Abuja.