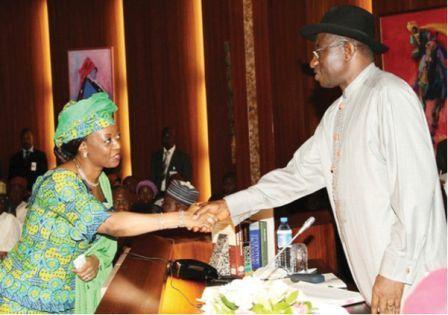 At least nine Nigerian ministers were embittered by what they described as the nonchalant and disrespectful attitude of Petroleum Resources, Diezani Alison-Madueke, during the just concluded Honorary International Investor’s Council (HIIC) in London.

The ministers were irked by Ms. Alison-Madueke’s disappearing act in London.

President Goodluck Jonathan, who led a delegation to London, had ordered his cabinet members to attend a meeting with Nigerians resident in the United Kingdom. But the Petroleum Minister took off on her own mission, without telling any of her colleagues her whereabouts. Her action angered other ministers who saw her behavior as a display of reckless indifference to and disregard for her colleagues.

According to a minister who spoke to SaharaReporters, he and his colleagues discovered, after the parley with Nigerians, that Ms. Alison-Madueke had arranged for Mr. Jonathan to visit some places in London with her. He added that the Petroleum Minister and Mr. Jonathan did not return until past midnight.

Mr. Jonathan had fallen violently ill last Thursday and had to be hospitalized last Thursday in London. The president did not attend the meeting with Nigerians either, as he ended his participation at the HIIC yesterday.

“Not only did Diezani not attend the meeting [with Nigerians], she also did not offer explanations for her absence or apologize to her colleagues for her non-appearance,” the minister told SaharaReporters.

Our source added that Ms. Alison-Madueke also did not attend the first day of the investment council events as she spent most of her time at the King Edward VII Hospital in Westminster where the president was treated. “The Minister of Petroleum Resources did not attend the inaugural meeting of the HIIC as she knew that President Jonathan was not going to be able to make it,” said the source.

When contacted today a source at the Petroleum ministry said the minister had a different investment meeting in London with investors from the United Arab Emirates (UAE) who are interested in getting oil blocks they intend to use in making two major refineries function to full capacity.

However, the assertion is at variance with recent announcement by the federal government, which announced plans to sell Nigerian refineries.

SaharaReporters learned that Ms. Alison-Madueke was one of the last persons with President Jonathan before he suddenly took ill and had to be hospitalized. Our cabinet source said that the Petroleum Minister did not alert her colleagues about President Jonathan’s hospitalization until very late.

In order to forestall an embarrassing situation, presidential spokesperson, Reuben Abati, was asked to quickly draft a release informing the public that Mr. Jonathan had fallen ill. The release did not disclose the nature of illness or the hospital where the president was hospitalized.

Yesterday, as Mr. Jonathan attended the HIIC, Ms. Alison-Madueke arrived late at the venue and left early, only to disappear again with the president as other ministers met with Nigerians and labored hard to explain the policies of the Jonathan administration.

President Jonathan remains in London today, but has no public activity planned for him, according to a Presidency source. He is scheduled to return to Nigeria tomorrow.