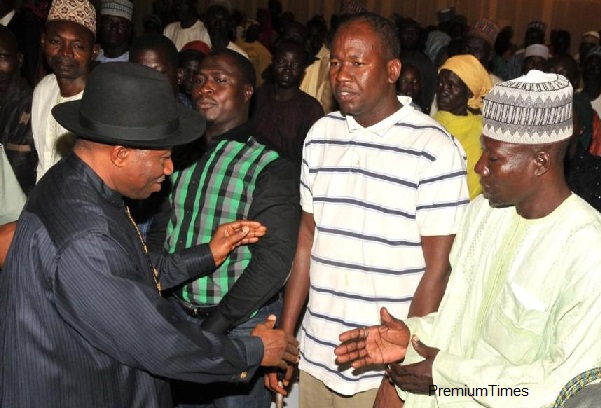 It is unclear why the presidency stocks millions of naira in cash at the presidential villa for distribution to visitors at a time the Central Bank of Nigeria is aggressively pursuing a cashless Nigeria agenda.

An alleged N100million cash gift given to parents of abducted Chibok girls by President Goodluck Jonathan after a meeting at the Presidential villa on July 22 has sparked disagreement between some of the parents and leaders of the Chibok community in Abuja, the BBC Hausa service is reporting.

The presidency, the report said, allegedly released the funds to leaders of the Chibok community in Abuja for onward passage to parents of the kidnapped schoolgirls.

But some of the parents are now alleging they were shortchanged by the community leaders.

One parent, who was among those who visited the president, told BBC’s Abdu Halilu that he got only N200,000.

He also said that he was not comfortable with the way the money was shared among the parents of the kidnapped girls and that he was shortchanged.

“Our leaders in Abuja are using the girls to enrich themselves. In fact, some of the parents were screened out of the entourage by the Chibok leaders in Abuja. Many of them are residents of Abuja, not parents of the kidnapped girls,” he said.

Another parent, who was screened out of the delegation that visited the president, said he got only N7,000 out of the money shared.

The parents stressed that they were not selling their daughters and that the money from the President just came to them without their asking for or expecting it.

One of the community leaders, Pobu Bitrus, who is also a member of the House of Representatives, was at the meeting with the president.

He explained to the BBC that after meeting with the president, monies were distributed to the parents in envelopes.

“After we met with the presidency, the parents were given monies in envelopes and that’s all. All other things they are saying about N100million, I don’t know about that,” Mr. Bitrus said.

It is unclear why the presidency stocks millions of naira in cash at the presidential villa for distribution to visitors at a time the Central Bank of Nigeria is aggressively pursuing a cashless Nigeria agenda.

Mr. Jonathan’s spokespersons, Reuben Abati and Doyin Okupe, could not be reached to comment for this story. They did not answer or return calls made to their mobile telephones.

After about three months of prevarication, President Jonathan finally agreed to meet with the parents of the abducted girls after he was persuaded to do so by Malala Yusoufai, the Pakistani teenager who champions the cause of girl child education.

The presidency has faced intense criticism over its handling of the kidnap of the Chibok girls being held by the extremist Boko Haram sect since April 14.