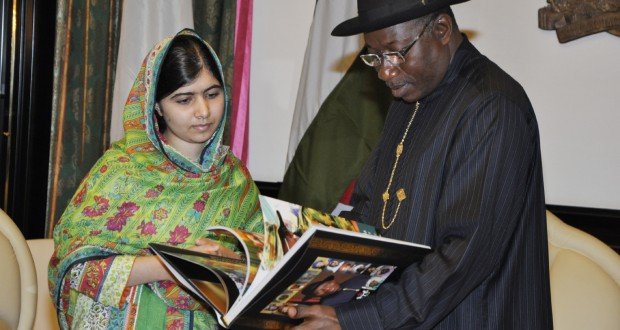 PT– President Goodluck Jonathan is meeting with 51 Chibok schoolgirls who escaped from their abductors days after the extremist Boko Haram sect stole them from their school dormitory and herded them into its Sambisa forest hideout.

Also at the closed-door meeting holding at the Presidential Villa, Abuja, are parents of the girls, service chiefs, President of the Senate, David Mark, Governors Kashim Shettima of Borno and Isa Yuguda of Bauchi as well as members of the Federal Executive Council.

The meeting, coming about 100 days after the girls and their over 200 colleagues were abducted, is in fulfilment of a promise President Jonathan made to Pakistani teenage  girls’ education activist, Malala Yousafzai, during her advocacy visit to Nigeria last week.

Malala had extracted a promise from Mr. Jonathan to meet and support the girls who escaped from their captors and intensify efforts at rescuing the ones still being held.

The parents of the abducted girls had pulled out of a hurriedly convened meeting with the president last week, saying any such meeting needed to be properly planned to accommodate all stakeholders.