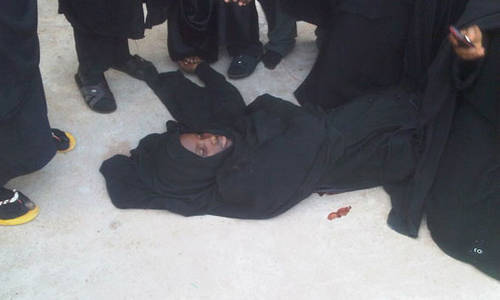 Nigerian troops this morning continued their onslaught against Muslims in Zaria, Kaduna State, killing three and seriously wounding ten, according to sources within the embattled group.

Two sources told SaharaReporters that Nigerian soldiers stormed one of the groups centers called ‘Husainiyyah Baqiyyatullah’ around 9 a.m. and killed three persons including one Sani Sufi, a staff of the center.

The Shiites accuse the Nigerian troops of killing 30 of their members since Friday evening when soldiers shot at a procession of Shiites during the group’s pro-Palestine demonstration in Zaria.

One of the sources, who sent photos to SaharaReporters, said, “The number of people killed by soldiers has escalated to 30 following another attack by the Nigerian soldiers at Husainiyyah Baqiyyatullah in Zaria today [Saturday July 26].”

“Around 9 a.m. local time today, a group of soldiers in military vehicles and armored tanks, opened fire on people at the Husainiyyah, killing three people on the spot while injuring at least 10,” said the source. He added: “Prior to today’s attack, the soldiers took two more corpses to the mortuary of the [Ahmadu Bello University] Teaching Hospital. They killed the two in cold blood after arresting them well and alive the previous day and they dumped their bodies at the mortuary today, Saturday the 27th of June, 2014.”

A spokesman for the sect said Nigerian troops were still holding 19 bodies of casualties, adding that his group was able to retrieve 11 bodies of those shot dead yesterday. “The number of those killed is now 30,” said the spokesman. He disclosed that funeral prayers would be held at 5 p.m. (Nigerian time) for the corpses in the custody of the Islamic sect.

“However, if the remaining bodies are retrieved on time, then the funeral for the martyrs will be held all together,” said the source.