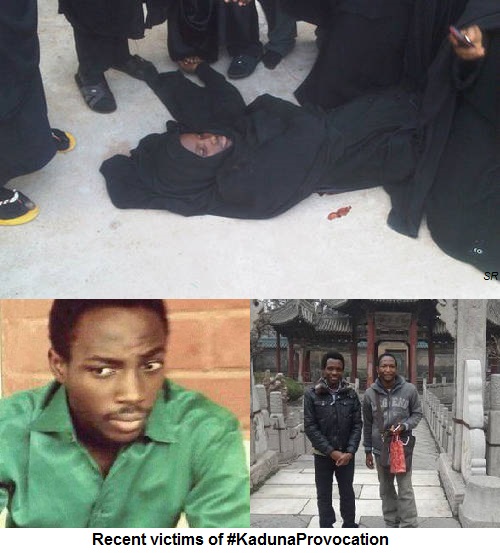 Let’s be blunt: someone at the top is trying to light a fire in Nigeria. They are trying to provoke extreme religious tensions and violence leading to total chaos and war in Nigeria. They chose Kaduna, the historic trigger point city where Muslims and Christians meet and tensions frequently rise high. This is where they attempted to assassinate Buhari and Sheikh Dahiru Bauchi this week – to trigger an all out full catastrophe in Nigeria. When that evil attempt failed, they proceeded upon a routinely peaceful legal, annual procession of Muslims in Kaduna. They reportedly fired on and killed Sheikh Zakzaky’s sons and others in the procession for ‘wasting the time of the soldiers who wished to cross the road.’ This Muslim group is globally known for their patience and eye-witnesses have it that rather than flare up, the Zakzaky procession victims controlled traffic and restored calm to the area.

Today again we have it that soldiers of the Nigerian army proceeded to Muslim centers in Kaduna and murdered three more in cold blood, bringing the total killed to 30. This is an obvious provocation ordered from above. But their plan must fail. We urge extreme patience from Nigerians, Muslims, Christians and others. Someone at the top wants to take us down with them, but we will not follow them down. A few months and they will be retired, even if they bribe and buy us with the looted $100 billion in rice bags and we vote them in out of our hunger, though thousands of us died, lost our livelihood and were displaced, the many of us left survived these terrible 4 years; we will survive till 2019 and then it will be over finally and we will get justice on all these killers. Let us not allow them take us down with them.

We strongly advise extremism in patience. Be patient, do not riot, do not kill any innocent person or burn any building. Keep focused. The enemy is the cabal. The enemy are the corrupt administrators who usurp the nation’s wealth and pay to get us to fight each other. The enemy are the politicians at the top who sponsor Boko Haram to distract us and set us against ourselves. The enemy are the army generals who transfer the nations artillery and vehicles to Boko Haram while sabotaging our soldiers’ ability to fight back. The enemy is not the Christian down the road or the Muslim on the motorbike. We suffer, are cheated and die together. We worry and cry together. Let there be no violence; let there be no tension, regardless of what is happening, what was attempted and what happens next in Nigeria as we count-down to February 2015. Do not kill. The devil is the liar.