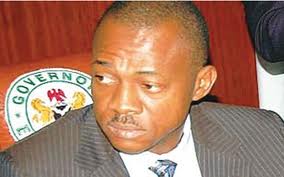 The embattled Deputy Governor of Enugu State, Mr. Sunday Onyebuchi, on Wednesday added a new twist to the impeachment process going on against him.

Onyebuchi, who continued his testimony after recovering from illness told the panel that Governor Sullivan Chime also operated poultry and piggery farms at the government house.

DailyPost recalls that Onyebuchi is being accused of rearing poultry at his official residence.

However, at the resumed hearing of the 7-man panel headed by Mr Uche Franklyn Oraekeiyi, the deputy governor who made the revelations and provided copies of state government budgets for 2011 – 2014 to back his claims further told the panel that several millions of naira allocated for the maintenance of the farms by the government was also released.

Speaking with confidence, he maintained that he had not committed any offence that could warrant
his removal from government by impeachment.

He said: “I have always said that this is a straight forward matter. One is the allegation of operating a poultry farm. We have been able to put the message across that the House of Assembly resolution is not a law and the resolution was not made available to me. We were able to make the point that there is also poultry at government house and while the poultry at the government house was evacuated with the commencement of the panel proceedings.

“Today, I was able to present to the panel, other evidence to show that there was poultry at the government house. I got copies of the Enugu State government budget for 2011, 2012, 2013 and 2014 and in each of these budgets, you have evidence of the allocation for government house poultry and piggery and amount attached to it and I was also able to prove that the amount was released. If they said there was no poultry, then let’s know why we have all these provisions all these years”.

On the allegation that he did not represent the governor at the flag off of the second Niger Bridge, Onyebuchi, who played video coverage of the event before the panel, also made reference to the live coverage of the event by the AIT, adding that he was never communicated in person or telephone or by any other means to represent the governor during his vacation at the South east governor’s meeting.

“He did not communicate to me in person, by telephone or whatever means, he never while going on vacation that he will pass instructions to me through a third party and like I said this is a straight forward
matter and I believe the ball is in the court of the panel. It is for them to decide whether to stand on the side of truth, on the side of justice which most citizens of Enugu state are asking for. If they believe like most people say that might is right, whoever has power is right, we will see by the end of the day. I have not committed offence that will justify being removed by impeachment. I started working with the governor in 2007 and if I was not obedient to him, I don’t think he will nominate me again for the second term to run with him for another four years.

“I am hopeful that truth will triumph. Like I said earlier, this is a panel of human beings and human beings are fallible and I am not afraid of any outcome; but what will encourage me to push forward besides the prayers and encouragement I have been receiving from the people of the state is the knowledge that I have right of appeal to a panel up there in heaven, that while we have a Supreme Court here, we have a Supreme –Supreme court where if I am a Christian and if God does not impeach me, I would have been a winner. I would be losing if I am impeached by God. So I am prepared for the outcome, especially given the massive outpour of prayers, support of majority of people of Enugu state, I feel good”, he said.

Recalling what happened the day he collapsed, Onyebuchi said he had actually been sick and had taken his drugs before coming to the court that morning, adding that midway into his evidence, he started feeling dizzy and demanded for water.

“The water was brought and I took it and told the panel members that I won’t continue that I was not fit enough. I was rushed away from the court. They took me to the doctor who confirmed that I had low blood pressure and reported this to the panel which was turned down.

“My lawyers came the next day and insisted that I was not fit enough to come and it was at that juncture that the panel insisted that a doctor from the ESUT teaching hospital should come and see me to confirm whether what the other doctor wrote was okay. The female doctor from ESUT teaching hospital came and I submitted myself, she examined me and I believe she did a report and till now the panel has not made the report available, but I believe that I am fit enough to stand trial and that is why I came”, he stated.