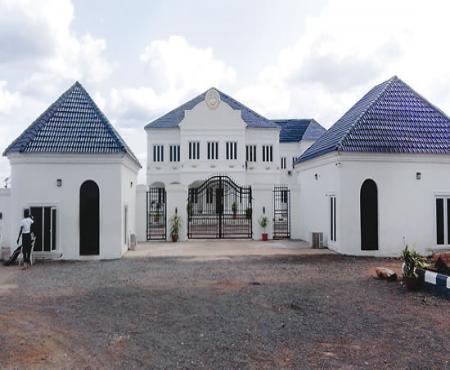 The palace of the Ooni of Ife, Oba Enitan Ogunwusi is living to its status, combining tradition with modernity, in terms of aesthetics.

On the Television screen, the Ooni of Ife’s palace is a 21st century architectural masterpiece exclusively designed only for royalty.
The all-white edifice is an eye delight from whichever side and whenever it is viewed. The epigraph inscribed on the building, however, revealed a structure which foundation stone was laid on August 1937 by the late Ooni of Ife, Oba Adesoji Aderemi.

Remarkably, a visitor to the palace this time last year when the late Oba Okunade Sijuwade was the occupant, would not but marvel at the physical transformation the Ile Oodua has passed through after the coronation of the current Ooni, Oba Enitan Ogunwusi (Ojaja II) in December 2015.

From the main entrance, opposite the Enuwa Square, the panoramic view of the palace is a beauty to behold with white colour adorning every structure, including the security post.

The Directorate of Media and Public Affairs naturally ushers visitors into the palace from the left side with a police post located at few metres away on the same side of the premises.

The Art Gallery, in which sculptures and other works of arts are displayed, stands a distance further on way to the gate leading into the man building which houses the Oonirisha and his household.
It was reliably gathered that the gallery used to be the office of the immediate past Press Secretary to Oba Sijuwade, Chief Funmilola Olorunnisola.

Though only few art works are currently on display, efforts are said to be underway to stock the gallery with variety of artifacts with which Ile-Ife is reputed.
Access to the Ile Oodua, as the palace is otherwise called, poses no problem going by the human traffic recorded on daily basis.
The sight undoubtedly shares a close affinity with what is seen at government secretariat which gate is often flung open to the general public.

But the free access ends when one moves beyond the gallery and makes it to the last entrance into the palace. The first obstacle is two security posts built with the fence.
Scaling through the routine security screening, the visitor is face-to-face with the magnificent building sitting like a rock in an expansive compound.

The 79-year-old edifice consists of two sitting rooms and six bedrooms. The rooms are complimented by a dining and kitchen.
A few metres away, there is a reception hall reserved for very important guests of the monarch. The hall has hosted crème-de-la-crème of the society on visitation to the Ooni. This hall is a compliment to the bigger one located outside the premises.
The one outside has 200 seat capacity and floored with a massive purple rug dotted with the Ooni’s royal insignia.
A garage in which the monarch’s cars are parked is also sighted at the left side while what can go for a staff quarter is located at the back of the palace.
No fewer than 50 aides of the Ooni including chief security officer, chief cook, Olori’s secretary and her personal assistant, occupy the structure.
The Director of Media and Public Affairs, Comrade Moses Olafare, who conducted our correspondent round the palace premises, affirmed the Ooni’s modest taste as expressed in the renovation of the palace with locally sourced materials.
Olafare said changing the face of the palace is one of the processes in ushering a new traditional ruler into his reign after the belongings of the immediate past have been removed.
This, he maintained, is the standard practice across the length and breadth of Yoruba nation while he also did not overlook its spiritual significance in conformity with traditional requirement.
“What we have done here is not different from that culture. The only difference I observe is that what happened here is the mother of renovation in terms of effect.
“But at a second thought one should not be surprised going by the background of Kabiyesi as one into property development and also into hospitality business. If you visit Inagbe Grand Resort in Lagos, you will understand what I mean,” he said.
The director also confirmed the Ooni’s unique taste as well as his philosophy of developing local materials to make amazing structure.

Oba Ogunwusi, according to Olafare, does not see any justification in combing Europe and elsewhere for materials available locally but only need developing.
“No one has ever complained of the beauty of the palace. Many still believe it’s the handiwork of expatriates. But it is an experiment that we can make things happen right here,” he said.
To further demonstrate this, the Ooni is currently constructing a replica of his Inage Grand Resort in his domain with a fat budget unprecedented in the history of the ancient town.

Named the Ife Grand Resort and Leisure and located some kilometers away on the Ile-Ife-Ibadan expressway, the N7.6 billion project is gradually taking shape.
Workers were seen sweating it out to give the town and indeed Osun State an hospitality haven that would boost internally generated revenue of government at all levels.
Features of the project include a seven-star hotel of 300 rooms, an artificial lake, floating bar, a golf course, three swimming pool, a lawn tennis court, an indoor sports hall, 30 horses, quad bikes, children play centre, mud brick houses and a guest hall.
Many Ile-Ife youth are eking out a living from the project, an empowerment that has impacted on crime rate in the town.
Besides, the Ooni has also distributed one million cocoa pots and trees to the youths and widows as part of his determination to create a lifeline to the beneficiaries.
As the grand patron of the Graduate Farmers Association of Nigeria, Oba Ogunwusi believes investment in cocoa production is a panacea to the current oil crisis.
About 100,000 youths and widow are expected to benefit with the scheme to breathe a new life to them.