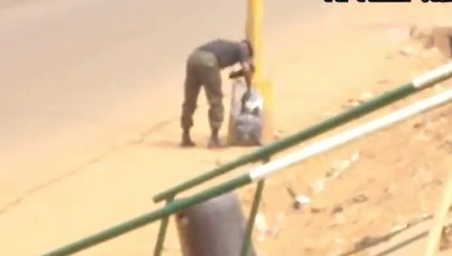 NewsRescue- The evil of Nigeria’s extremist terrorist group, which operates out of North -Eastern extremities of Nigeria, Boko Haram, can not be better contextualized than by watching this very sad video of a brave Nigerian police officer ‘Salisu’, who was blown to pieces while attempting to detonate a bomb at Unguwar, Sarki, Kaduna.

As the crowd cheered, the bomb went off and pieces of the cop, including a severed foot could be seen scattered all over the area.

Boko Haram, which means- western civilization is sin, is a radical group with foreign ties and interests, that aims at creating strife, chaos and destruction of the emerging-powerful economy, African most populous Nation.

In recent days, the Nigerian security services have made commendable progress against this fringe, fanatical group, arresting several spokes-men and top officers of the group, including a dangerous youth-fugitive Kabiru Sokoto, who gained national fame when he earlier this year, allegedly escaped from police custody.

So much for their slogan, that western civilization is bad: Kabiru Sokoto’s taste for clothes of western civilization are anything but silent in this picture of his re-capture. He is clad in a brand new PUMA T., with a leaping Cougar on it, even though it is understood that strict Muslims do not harbor ‘graven images’.

Field experts in the US upon reviewing the video told NewsRescue that municipal police never disarm bombs, but only carry out controlled detonation. Only special trained Bomb squad units attempt to disarm. The process is first carried out by remotely studying the bomb to make a profile and determine the approach to disarm, ever before robots or special trained agents are sent in. “This bomb was in an open field and could safely have been detonated with a volley of shots, from a safe distance, releasing the fuel and disconnecting or defusing the trigger pack”, an expert said.

The brave officer was not clad in Bomb Squad attire, assuming that Kaduna state has such squad and that he belonged to the squad. Two days ago in Thailand, bombs went off and an equipped Bomb squad came in. There was definite misconduct by the Nigerian police force, the typical problem that plagues the Nation.

This is not a good look for Nigeria. Nigeria’s Elite and ruling class are known for their fancy, latest edition cars, houses and exotic lifestyle, yet the police department is not funded enough to conduct safely the simplest operations. Neither the government, nor the remaining rich people can donate necessary equipment and support to protect themselves and others in the event of accidents and other mishap.

Nigeria, a very wealthy nation should by now have robotic bomb detonators, which are used to inspect and remote-disarm potential explosive items in all industrialized Nations. These machines are easily procurable and not as expensive as to make Nigeria’s security services loose their life in uncalled for attempts at ‘brave disarmament’. Nigerian youth and all citizenry up North must keep up their vigilance and keep routing these miscreants out, so they can face the justice they deserve for their wanton destruction of life and property.